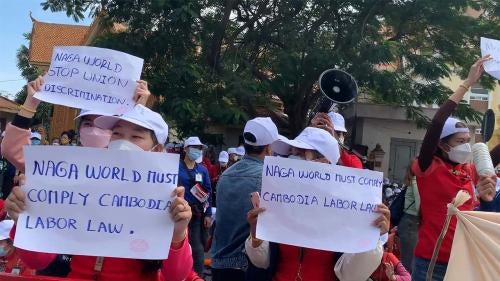 (New York) – The Cambodian government has used the Covid-19 pandemic to jail union activists, restrict union registration, and block the right to strike in the garment and tourism industries, Human Rights Watch today said in a report released today. The authorities have also permitted employers to evade labor regulations and engage in unfair labor practices in violation of Cambodian and international law.

The 97-page report, “Only ‘Instant Noodle’ Unions Survive: Union Busting in Cambodia’s Garment and Tourism Sectors,” documents how the Cambodian government and some employers have used various legal and administrative tactics during the Covid-19 pandemic to weaken Cambodia’s independent union movement and violate workers’ rights. Measures adopted to address the severe economic impacts of the pandemic have punished independent unions while benefitting employer-friendly unions, which could register quickly with the government, like “making instant noodles,” in the words of a prominent union leader.

“The Cambodian government and unscrupulous employers used the Covid-19 pandemic as an excuse to further restrict independent unions instead of protecting worker welfare and rights at a desperate time,” said Phil Robertson, deputy Asia director at Human Rights Watch. “As labor rights in Cambodia backslide, the European Union, United States, and other trade partners should use their leverage and increase their pressure on the government to comply with its labor rights obligations.”

Human Rights Watch interviewed more than 30 independent union leaders and members in the garment and tourism sector, and local and international labor experts, including representatives of the International Labour Organization (ILO), between March and June 2022. Human Rights Watch also wrote to and sought information from the Cambodian government and relevant companies in Cambodia but received a response only from one factory.

In one example, in April 2021, the NagaWorld casino in Phnom Penh laid off 1,329 workers. The authorities arbitrarily designated an ongoing strike illegal, and used social distancing and other Covid-19 mitigation measures as a pretext to remove strikers and temporarily confine them for testing.

“After we started our strike [against NagaWorld casino], a fake, new union suddenly appeared, which we call the ‘instant noodle’ union because it got registered with the Ministry [of Labor and Vocational Training] as fast as a cup of two-minute instant noodles,” said Chhim Sithar, the president of the Labor Rights Supported Union of Khmer Employees (LRSU). “Workers at NagaWorld don’t even know that a union election took place and who voted for the leader.”

Sithar was charged with “incitement to commit a felony” over the strike that called for reinstatement of 365 dismissed workers and fair compensation from NagaWorld casino. She was held in pretrial detention for 74 days. She was released on bail, but the charges against her remain pending.

Cambodian companies have also continued to abuse fixed-duration contracts to discourage workers from organizing and to avoid paying legally owed severance payments. Employers have frequently discontinued fixed-duration contracts without cause or notice, targeting union leaders and activists in response to workers’ union activities. The Ministry of Labor and Vocational Training issued an instruction to allow for the extended use of fixed-duration contracts beyond the legal two-year limit, in apparent violation of Cambodian labor law. The Arbitration Council, which issues authoritative interpretations of the labor law as part of dispute settlement, has increasingly refused to rule against the ministry.

Without recourse to an independent Arbitration Council, the independent unions have been denied effective access to justice and legal remedies, Human Rights Watch said.

In August 2020, the European Commission partially suspended Cambodia’s “Everything But Arms” trade preferences based on findings that the government had committed systematic violations of civil and political rights as well as of labor rights. The US Trade Representative is currently undertaking a review of its overall Generalized System of Preferences system, thereby suspending the tariff-free access of all beneficiaries, including Cambodia’s, into the US market.

“Cambodia’s independent unions and their members simply cannot obtain meaningful and timely redress for labor rights abuses they have suffered,” Robertson said. “Trade partners, international garment brands sourcing from Cambodia, and the ILO should work together to press for the creation of effective dispute settlement mechanisms that will uphold workers’ rights.”