The Perfect Enemy | Brazil may have its own January 6 moment – or worse
Skip to content
December 3, 2022
Read Time:6 Minute 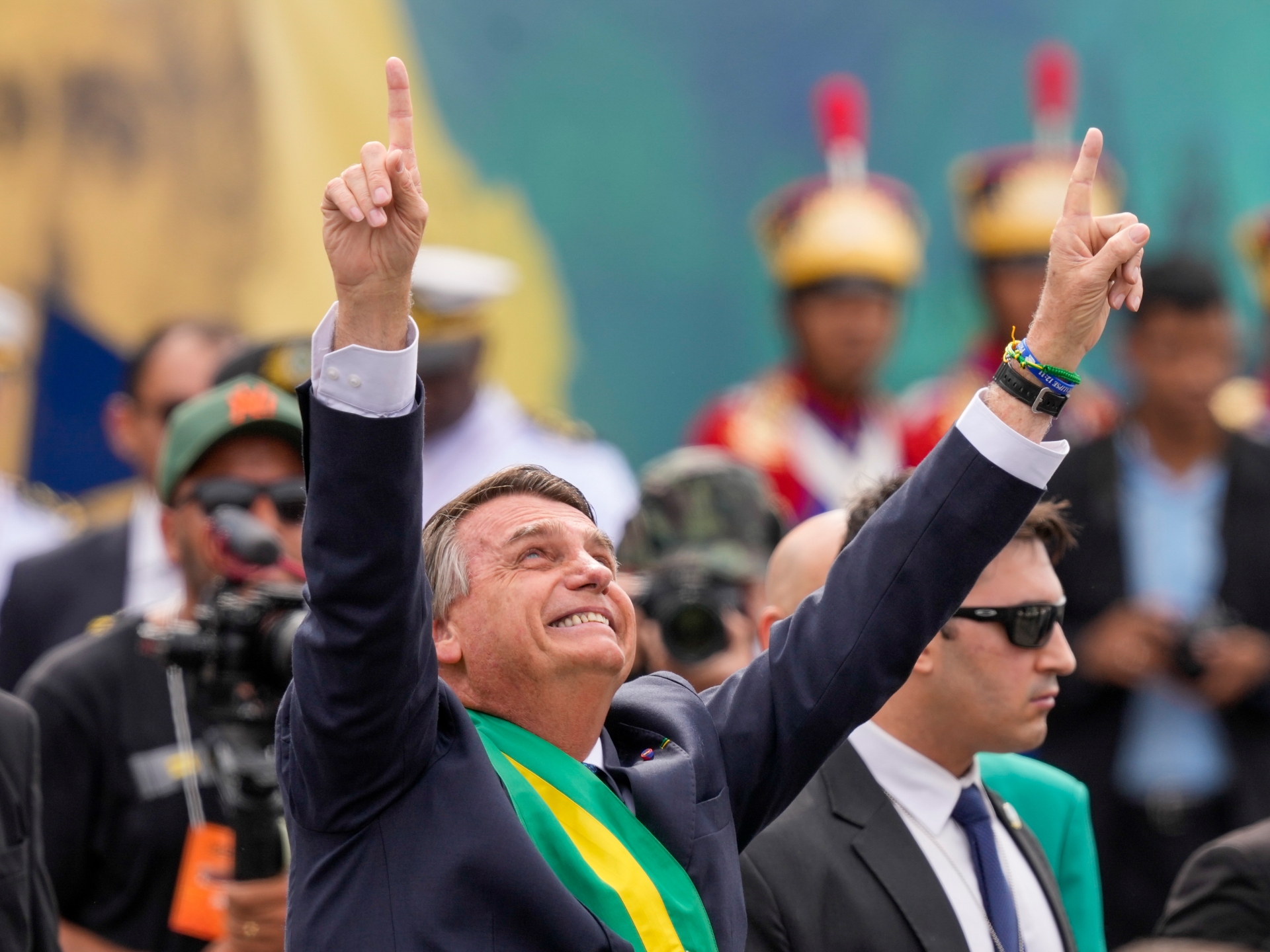 On October 2, Brazil will hold its ninth democratic election since military rule ended in 1985. But this young democracy, the second largest in the Western hemisphere, is under threat. The greatest menace comes from current far-right President Jair Bolsonaro, who is seeking re-election.

Bolsonaro lags considerably behind challenger Luiz Inácio Lula da Silva, with recent polls showing only 31 percent of the electorate supports him. But a Bolsonaro defeat doesn’t mean that Brazil will immediately get back on the path to democracy, prosperity or political sanity.

Bolsonaro enjoys a fervent base of supporters, many of whom are armed extremists, hailing from the military, police and militias analogous to the Proud Boys in the United States. If he were to lose at the polls, there is an imminent risk that Brazil will experience something similar to the January 6 attack on the US Capitol. Or worse.

As president, Bolsonaro has used the highest office in the country to aggressively fan the flames of disinformation. This tendency became tragically clear during the COVID-19 pandemic, when he personally promoted the use of unproven (and now disproven) treatments and opposed vaccination. As a result, Brazil suffered some of the highest death rates in the world.

With his first term drawing to a close, Bolsonaro has increased attacks on the Brazilian electoral system itself. He recently claimed that the vote counting machines are flawed, but produced no evidence. The Superior Electoral Court (TSE), which is responsible for election security, has strongly rejected Bolsonaro’s baseless claims. But as voting day nears, the president’s discourse has become even more radical, as he seeks to rally his base against the electoral institutions that are the backbone of Brazil’s democracy.

We are not suggesting that Bolsonaro would lead a traditional coup, with tanks rolling down the street, as happened in 1964. But we see major threats to democracy and possibly insurrection if, as expected, Bolsonaro loses at the polls. Here’s why.

Bolsonaro joined the army in the 1970s, during Brazil’s military dictatorship (1964-1985). He has spent much of his career defending this regime and positioning himself as an apologist for torture and genocide.

Bolsonaro is dangerously enmeshed with the military, which continues to have a major conservative slant, having endured no serious reform or purge after the end of the dictatorship.

His current vice president and new running mate are senior generals. According to watchdog groups, the number of military personnel in government roles has doubled during Bolsonaro’s term, too.

Some retired generals occupy security roles but others have been strategically placed in positions they have no expertise for, such as the health ministry. Other appointments show how the Bolsonaro government has militarised its relationship with certain sectors of society. For example, of the 39 political appointees in Bolsonaro’s FUNAI, the government organisation that interfaces with Brazil’s Indigenous people, the majority have police or military backgrounds. This makes Bolsonaro’s government one of the most militarised in Latin America – second only to Nicolas Maduro’s Venezuela.

During his term in office, Bolsonaro has chipped away at Brazil’s democratic institutions and stifled dissent against the government’s antidemocratic turn, to the extent that some of his generals are refusing to defend the existing voting system ahead of the polls.

One of the military appointees to the country’s Superior Electoral Court was also suspended from participation earlier this month, for making baseless claims about voter fraud. This reveals the scale of doubt that is already being cast on the elections by forces close to the president.

If a pro-Bolsonaro insurrection were to happen, it would likely be carried out by the president’s armed base, which includes police, soldiers and extremist armed civilians. Many members of these professions embrace Bolsonaro’s radical positions and profess loyalty to him, possibly defying the military chain of command they are subordinate to.

This disposes them to take violent action that subverts democracy if they believe it’s what Bolsonaro wants. All of this must also be understood within the context of Brazil’s astronomically high levels of state violence.

The most defining characteristic of Brazil’s police force is its lethality. In 2020 alone, according to Amnesty International, the police killed 6,416 people. Rio de Janeiro state, where Bolsonaro held congressional office and spent most of his political career, has one of the deadliest police forces in the country.

That the police routinely kill people, especially low-income Black people, has become a horrific fact of life in the city. Bolsonaro has often praised violent police and even said they should receive medals for murdering criminals. It is easy to imagine how this mentality could be employed against political protesters in the event of mass mobilisation to defend democracy.

Bolsonaro’s hard-line rhetoric isn’t appealing only to the police. It resonates with a substantial segment of the population tired of everyday violence in Brazil and frustrated with the government’s seeming inability to address crime and social problems. Bolsonaro, while ironically at the helm of the very government that fails to protect its citizens, has encouraged vigilante sentiments, especially by promoting gun ownership, which until recently was highly restricted in Brazil.

Bolsonaro has supported legal changes to ease access to guns, and frequently promoted gun culture and violence. Between 2018 and 2022, gun licences soared by 473 percent. Bolsonaro frequently poses with his thumb and forefinger making a gun shape, especially on the campaign trail. In 2021, he told a group of supporters: “Everyone needs to buy a gun, man. Armed people can’t ever be enslaved.”

“You can’t ever be enslaved” is a frequent refrain, as Bolsonaro consistently frames Brazil as teetering on the edge of becoming a communist country. He portrays political opponents not as democratic competitors, but as threatening enemies who must be defeated at all costs.

He and his sons have frequently called for violence against those on the political left. During the 2018 elections, he urged his supporters to shoot Brazilians who vote for progressive candidates.

This incendiary rhetoric has predictably had tragic consequences. In July 2022, one of Bolsonaro’s supporters did exactly that: He attacked a birthday party for Marcelo Arruda, a leftist political figure, and assassinated him. In rallies, Bolsonaro supporters have paraded through the streets with fake coffins with the images of a few Supreme Court justices.

Many Brazilian institutions are mobilising against Bolsonaro’s campaign to undermine electoral and democratic institutions. As election day nears, the TSE has worked to bring additional transparency to the process, involving both military personnel and representatives of civil society in oversight and reminding police commanders of their obligation to guarantee order and security during the vote. In addition, various professional organisations, including lawyers’ and judges’ associations, have come forward in public support of the TSE and the electoral process.

The consequences for the election and peaceful transition of power should Bolsonaro lose the election are yet to be seen. Even if Bolsonaro loses and no insurgency occurs, the incoming president will need to dismiss the military members in government, deal with an increasingly fascist police and restrict access to guns. None of this will be easy, but Brazil’s democracy depends on it.

The views expressed in this article are the authors’ own and do not necessarily reflect Al Jazeera’s editorial stance.