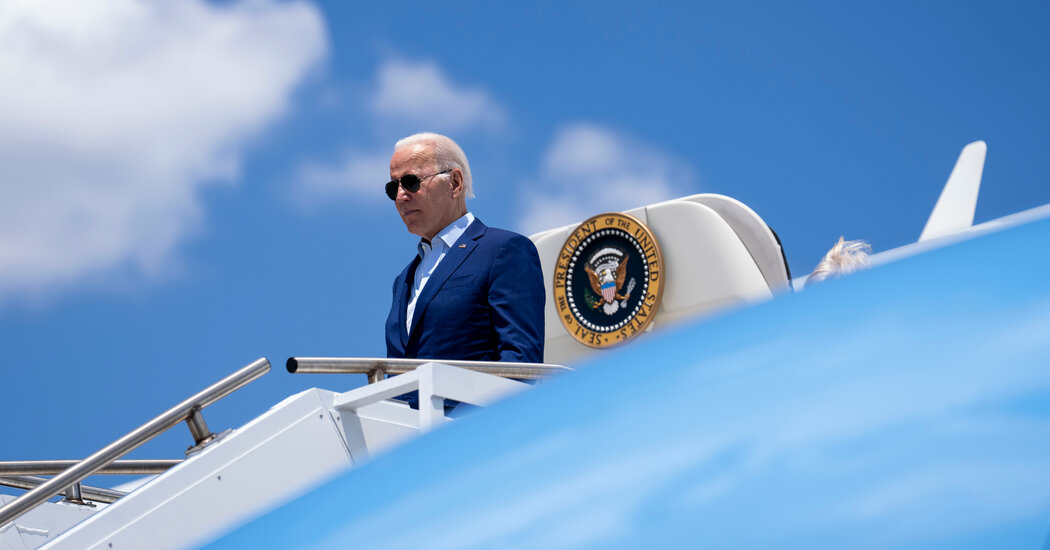 The president tested positive for the coronavirus on Thursday and is expected to isolate for at least five days before resuming normal activities.

WASHINGTON — President Biden tested positive on Thursday for the coronavirus, raising health concerns for the 79-year-old president and underscoring how the virus remains a persistent, if muted, threat in a country trying to put the pandemic in the past.

Karine Jean-Pierre, the White House press secretary, said in a statement that Mr. Biden had “tested positive for Covid-19. He is fully vaccinated and twice boosted and experiencing very mild symptoms.”

The president will “continue to carry out all of his duties fully” during this time, she said.

Dr. Kevin O’Connor, the president’s physician, said in a letter released by the White House Thursday morning that Mr. Biden felt fatigued, had a runny nose and an occasional dry cough and that his symptoms began on Wednesday evening. The president is receiving Paxlovid, an antiviral drug used to minimize the severity of Covid-19.

Officials said that Mr. Biden would isolate in the White House residence for at least five days, at which point he will resume normal activities if he tests negative. If he continues to test positive he will remain in isolation until he tests negative.

“I anticipate that he will respond favorably, as most maximally protected patients do,” Dr. O’Connor wrote in the letter. Ms. Jean-Pierre told reporters that Dr. O’Connor would not take questions directly, as previous presidential physicians have, but will issue written statements about Mr. Biden’s condition each day while the president isolates.

In a short video posted to Twitter, Mr. Biden thanked people for their concern and said he is “doing well, getting a lot of work done.” In the video, Mr. Biden is shown standing near a balcony overlooking the South Lawn of the White House, dressed in a suit but with no tie.

The president’s diagnosis represented a moment his aides had spent years bracing for.

As a candidate in 2020, Mr. Biden took extraordinary measures to avoid becoming sick, holding “drive-in rallies” and avoiding the kind of in-person events that had been hallmarks of life on the campaign trail.

As president, Mr. Biden remained severely isolated in his first months in office as the virus surged throughout the country. The number of staff members he interacted with was limited. Members of the news media and others were tested regularly. Mr. Biden and his staff wore masks at all times.

More recently, however, as the number of vaccinated people increased and as Americans looked for a return to normal life, the president has largely resumed regular activity. Last week, he returned from a trip to Israel and Saudi Arabia, where he shook hands and embraced many world leaders.

At home, Mr. Biden rarely wears a mask and has returned to hosting crowded events in the East Room and elsewhere in the White House.

On Thursday, the president’s top Covid official said there was little reason to expect that Mr. Biden would experience anything other than mild symptoms.

“Because the president is fully vaccinated, double boosted his risk of serious illness is dramatically lower,” Dr. Ashish Jha, the White House Covid Response coordinator, said. “He’s also getting treated with a very powerful antiviral, and that further reduces his risk of serious illness. It’s a reminder of the reason that we all work so hard to make sure that every American has the same level of protection.”

Dr. Jha said that Mr. Biden has stopped taking his regular medications, including a blood thinner and a pill to reduce cholesterol, for the five days that he will be on Paxlovid, as recommended by his doctor.

Mr. Biden is the second president to be infected with the coronavirus. In October 2020, President Donald J. Trump tested positive at the White House and was taken by helicopter to Walter Reed National Military Medical Center.

Mr. Trump and his aides initially downplayed his symptoms, but reporting later revealed that Mr. Trump’s blood oxygen levels had fallen sharply and that aides were worried that he would need to be put on a ventilator.

Mr. Trump was given monoclonal antibodies and an intravenous drug called Remdisivir, as well as steroids to combat inflammation in his lungs. He stayed in the hospital for three nights.

Mr. Biden’s positive test came amid a flurry of cases as the nation grapples with new versions of the virus that doctors say are highly contagious and can more easily evade the protections provided by coronavirus vaccinations.

In just eight weeks, the Omicron subvariant known as BA. 5 has gone from a blip in United States case counts to the dominant version of the coronavirus in the country, and now makes up more than three-quarters of new cases. Perhaps the most transmissible subvariant yet, BA. 5 is driving increases in positive tests, hospitalizations and intensive care admissions across the country.

As of Wednesday, an average of roughly 127,700 known coronavirus cases and 426 deaths were being reported each day in the United States, according to a New York Times database, a marked increase from early July.

“We should not let it disrupt our lives. But we cannot deny that it is a reality that we need to deal with,” Dr. Anthony S. Fauci, Mr. Biden’s chief medical adviser for the pandemic, said recently at a White House news briefing.

Many Americans have turned their attention away from the pandemic, and many health officials have grown more hesitant to sound the alarm. Much of the country has dropped shutdowns and mask requirements despite current recommendations by the Centers for Disease Control and Prevention that people continue to take precautions in most parts of the country.

Mr. Biden’s coronavirus infection is a stark illustration that the Covid vaccines, powerful as they are, are far from the bulletproof shield that scientists once hoped for.

The president has received multiple doses of the Pfizer-BioNTech vaccine and his most recent shot, a second booster, was on March 30. But even booster doses offer little defense against infection, particularly with the most recent versions of the virus. What little protection they do offer wanes sharply and quickly, several studies have shown.

Mr. Biden and Americans his age and older have made up larger and larger shares of those dying from Covid in recent months. The virus has taken advantage of waning immunity caused by long delays since older people received their previous vaccinations.

As of early June, four times as many Americans aged 75 to 84 were dying each week from the virus compared with people two decades younger, according to data from the C.D.C.

It was unclear exactly how Mr. Biden became infected, and White House officials declined to offer detailed information about who he was in contact with in recent days. It is difficult to determine exactly how or when someone was exposed to and infected with the virus.

Officials said the president’s previous virus test was on Tuesday, when he had a negative result. Ms. Jean-Pierre and Mr. Jha said the president is “regularly” tested but declined to say how often or to explain why he is not tested every day.

Mr. Jha said: “I don’t really think there’s a huge advantage of testing, like, every day.”

Mr. Biden had a series of close calls with the coronavirus before becoming infected. In March, he attended a gala event with Prime Minister Micheal Martin of Ireland, who left the event after testing positive. Officials said at the time that during the gala Mr. Biden and Mr. Martin had not been in close contact, which the C.D.C. defines as being within 6 feet of someone for at least 15 minutes over a 24-hour period.

Mr. Biden also attended the White House Correspondents’ Association Dinner in May, and a number of attendees tested positive for the virus after that gathering, including Secretary of State Antony J. Blinken.

Representative Bennie Thompson of Mississippi, the chairman of the House committee investigating the Jan. 6 attack on the Capitol, announced on Tuesday that he had tested positive for the coronavirus and would not appear in person at what could be the panel’s last hearing this summer.

The president and other Democratic lawmakers have pleaded with Republicans in Congress to pass emergency coronavirus funds to ensure that the United States can purchase new vaccines and therapeutics as the pandemic continues.

That demand, for as much as $22.5 billion to pay for more vaccines, testing, therapeutics and research remains stalled, with lawmakers unable to agree over how much to spend and how to pay for it. Republicans have demanded that any additional coronavirus aid be paid for by repurposing money already approved by Congress.

The president was scheduled to fly to Pennsylvania on Thursday for a speech about gun violence and then to travel to his home in Wilmington, Del., where he was expected to stay for the weekend. White House officials said both trips had been canceled.