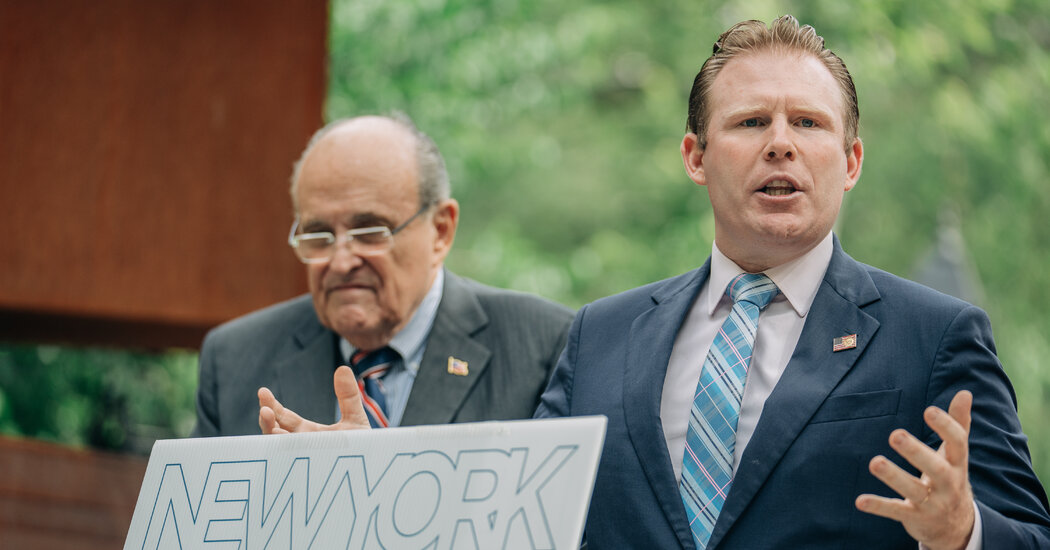 The Republican candidate for governor of New York is unvaccinated and says he has “natural immunity” to the coronavirus.

ALBANY — With the first Republican debate in the governor’s race scheduled for Monday night on WCBS-TV, the roster of in-person candidates has shrunk by one, as Andrew Giuliani — proudly unvaccinated against the coronavirus — announced on Sunday that he will not be allowed to attend.

Mr. Giuliani, the son of the former New York City mayor Rudolph W. Giuliani, said on Sunday that he had been informed late last week that the station would not permit him in the studio unless he sent proof of his vaccination status — something he said he would not do and suggested might be unconstitutional.

“I chose very clearly that I was not going to get the shot,” said Mr. Giuliani, 36, in an impromptu news conference on Sunday outside CBS headquarters in Manhattan, saying he had “looked at the data” on the vaccination and decided against it.

As of Sunday, according to a New York Times database, 91 percent of New Yorkers of all ages have received at least one dose of a coronavirus vaccine, and 78 percent of residents are fully vaccinated.

Mr. Giuliani preceded his news conference by releasing a letter he sent to WCBS, the CBS network’s flagship affiliate, arguing that their policy was “arbitrary” and “serves to discriminate against a political candidate and their access to equal opportunity and religious liberty.”

In a statement, WCBS said that its broadcast center requires that visitors are vaccinated against the coronavirus, and that the policy — which dates to last year — was made “in consultation with health care experts, government officials and the many unions representing our employees.”

“Any candidate who doesn’t meet this requirement is encouraged to participate in Monday’s debate remotely,” the station said, adding it hoped the debate would “allow Republican candidates to share their views on matters of importance to the residents of New York State.”

At Sunday’s news conference, Mr. Giuliani said he had “natural immunity” to Covid-19, which has killed more than one million Americans, and that he had offered to take multiple tests to prove he was not infected, but that he had nonetheless been disinvited from the debate.

Instead, Mr. Giuliani said he would, in fact, participate virtually, a prospect that was almost immediately criticized by Mr. Zeldin, who tweeted that “the remote option is a nonstarter,” while adding “the reason to have him virtual is ridiculous.”

Mr. Astorino echoed this, saying that “all four candidates should be onstage,” and that “discriminatory and unscientific vaccine mandates” wouldn’t prevent transmission of the disease. (The vaccines have been proven to prevent most serious cases of the disease.)

Mr. Giuliani, who is making his first run for public office and has been regularly campaigning with his father, has argued that the candidates should debate almost every day before the June 28 primary, while also railing against mandates for emergency medical workers and others, something he reiterated on Sunday.

“I’m obviously seeing consequences in what I believe is my informed decision on this,” he said, adding that if elected, he will “throw all of these mandates in the dust bin of history.”