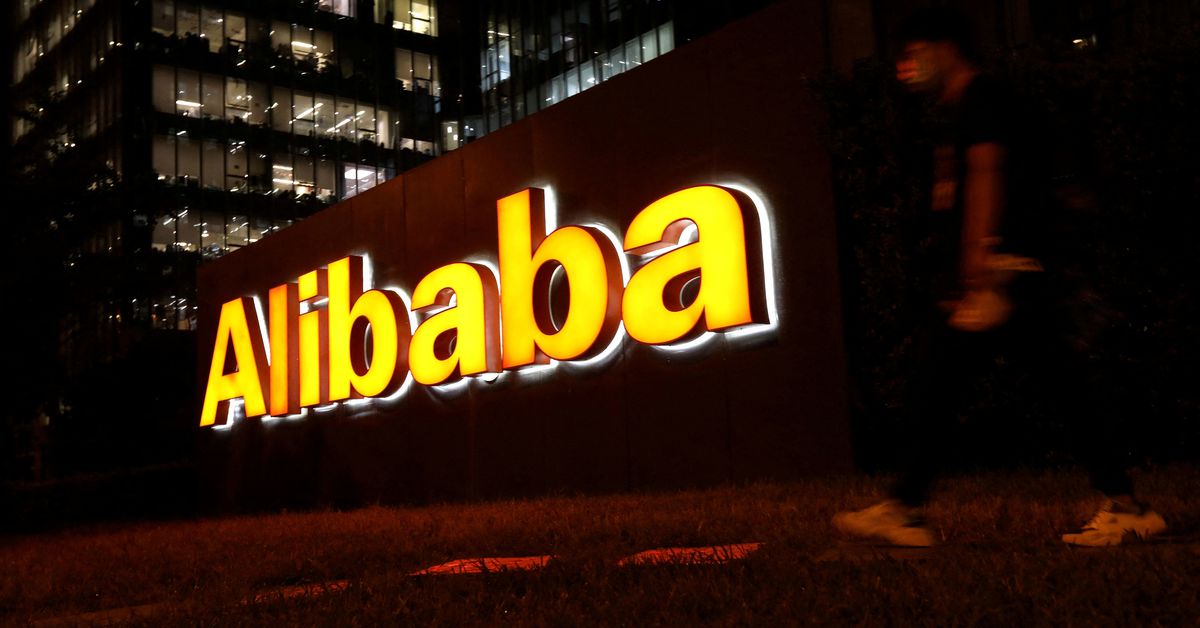 A man walks past a logo of Alibaba Group at its office building in Beijing, China August 9, 2021. REUTERS/Tingshu Wang//File Photo

The slowdown adds to challenges facing China’s e-commerce giant, which has enjoyed double-digit revenue growth almost every quarter since it went public in 2014, as it navigates Beijing’s crackdown on tech companies as well as its scrutiny of founder Jack Ma.

Still, Alibaba’s performance was better than expected and its shares were 4.3% higher in early U.S. trading.

In an earnings call, CEO Daniel Zhang said the company saw signs of a business recovery in July, but emphasized that the following months would be a period of “cost-cutting and efficiency.”

“External uncertainties including but not limited to international geopolitical dynamics, COVID resurgence, and China’s macroeconomic policies and social trends are beyond what we as a company can influence,” said Zhang.

“The only thing we can do at this moment is focus on improving ourselves.”

China locked down dozens of cities between April and May as the Omicron coronavirus variant swept through the country, with major cities, including Shanghai, facing some of the harshest restrictions that paralysed intra and inter-city delivery and prevented households from shopping online.

Analysts at Nomura estimated in mid-April that 45 cities in China, representing 40% of its GDP, were under full or partial lockdowns.

“Following a relatively slow April and May, we saw signs of recovery across our businesses in June, Alibaba said in its earnings release. “Despite near-term challenges, Taobao and Tmall continue to achieve high consumer retention, especially among consumers with higher spending power.”

Revenue stood at 205.56 billion yuan ($30.43 billion) in the quarter to end June, a 0% year-on-year change but beating analyst expectations.

Customer management revenue, which tracks how much money merchants provide Alibaba for placements and promotions, fell a whopping 10% to 80.4 billion yuan. The revenue segment is Alibaba’s bread and butter, routinely making up roughly one third of its total revenue.

The company has already faced slowing revenue growth in the past year, due to a weakening economy and stiffer competition from rivals like Pinduoduo (PDD.O) and ByteDance.

Cloud computing revenue, its main growth driver outside of e-commerce, grew 10%, while revenue for the company’s international division grew 2%.

In the quarter, Alibaba earned 11.73 yuan per share on an adjusted basis, compared to analysts’ estimates of 10.39 yuan based on Refinitiv IBES data.

Alibaba has also been caught up in Beijing’s sweeping crackdown on China’s tech sector.

The company’s shares have fallen by roughly two-thirds since late 2020, when regulators in Beijing abruptly halted the IPO of its finance affiliate Ant Group, an event that marked the beginning of the tech crackdown.

Analysts say that regulatory and competitive pressures will continue to weigh on Alibaba even if the broader economy recovers.

“Alibaba can’t maintain the robust growth rates it once had forever because the company is maturing in its business cycle, and also the regulatory environment has changed completely,” said Vinci Zhang, who tracks China’s e-commerce sector at Shanghai-based research firm Pacific Epoch.