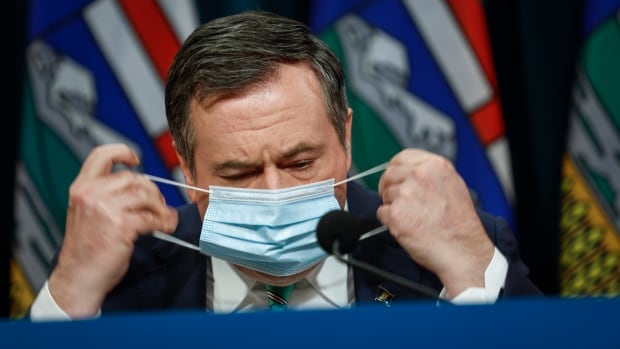 Premier Jason Kenney says Alberta Health Services did not respond to political direction during the most dire waves of the COVID-19 pandemic.

Kenney told reporters at a Calgary news conference Wednesday that AHS provided the government with continually changing numbers about the number of intensive care beds it could operate across the province during the pandemic.

“All politics aside, decision makers need clear and timely information when you’re dealing with a crisis like this, and we simply did not receive that,” Kenney said at a news conference about expanding private surgery capacity in the province.

Critics who wanted more measures to contain the spread of the virus causing COVID-19 have lambasted Kenney and his government for being too slow to respond at times when cases increased in the province.

Kenney took particular heat for going on vacation during the summer of 2021 when most health restrictions were removed and cases of the Delta variant began to rise rapidly in August and September of 2021.

Kenney said Wednesday that AHS had initially said it could operate more than 1,000 ICU beds across the province during the pandemic. By May 2021, the government was saying its maximum ICU bed capacity was 425.

“We were given a September surprise a year ago that the best the system could do was to stretch from 173 [beds] to 230,” Kenney said.

According to government data, pandemic ICU bed use peaked in the province on Sept. 28, 2021, at 337 patients with and without COVID-19. Another 53 beds were considered unoccupied that day.

But the situation was more acute on May 15, 2021, when there were only six ICU beds considered unoccupied while patients were in 259 ICU beds.

However, Kenney said the information from AHS about ICU capacity limits the next fall were unexpected.

“It was in my view unacceptable to have decision makers surprised with that radical reduction in stretch capacity at the last minute in a critical moment,” he said Wednesday.

When asked for a response to Kenney’s comments, an AHS spokesperson sent a link to a year-old news story and a January op-ed penned by CEO Dr. Verna Yiu before her departure.

In the Edmonton Journal op-ed, Yiu said AHS had been nimble and flexible in responding to the pandemic, and more than doubled the number of ICU beds operating during the fourth wave in fall 2021.

Yiu said every Albertan who needed an ICU bed had access to one.

Many politicians have pointed fingers at the health agency for their pandemic response and claimed they were unprepared to handle a large influx of sick patients.

In April, AHS suddenly announced Yiu was leaving less than halfway through a two-year contract.

At the time, the government said they were looking for a new, longer-term leader to oversee changes, such as the use of more private surgical clinics.

United Conservative Party leadership candidate Danielle Smith, who is vying to replace Kenney, has proposed firing the board overseeing AHS. Most board members were appointed by the current government.

Kenney said his government has since made it clear to AHS they expect a permanent expansion of critical care capacity, and have funded an expansion of 50 more ICU beds, 32 of which are now open.

NDP Leader Rachel Notley said Wednesday that earlier in the pandemic, people working within the health-care system didn’t believe they could scale up intensive care units as much as the government was promising. She said it was unachievable with Alberta’s health-care worker numbers.

“Jason Kenney’s attempts to whine about AHS is nothing but a continuation of a long practice of failing to take responsibility for really bad decisions that he has made that hurt Albertans.”

Notley said the government’s management of health-care has been chaotic, by ending a master agreement with Alberta’s doctors, threatening some workers with pay cuts and outsourcing jobs to private companies.

Greenwich Art Society celebrates ‘Time in Place,’ an exhibit inspired by stasis of the COVID-19 era