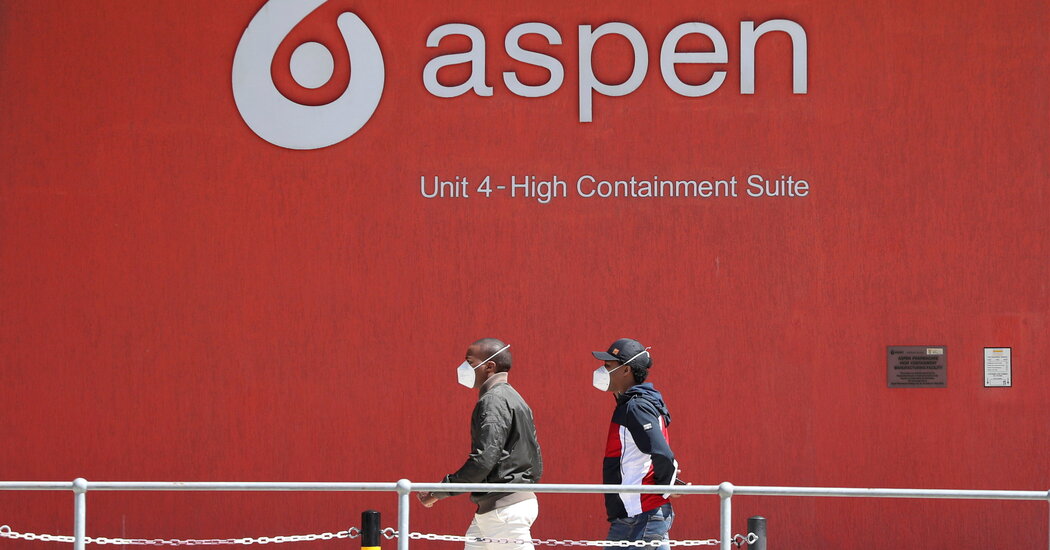 JOHANNESBURG — The first factory in Africa licensed to produce Covid-19 vaccines for the African market has not received a single order and may shut down that production line within weeks if the situation doesn’t change, according to executives of the company, Aspen Pharmacare.

The factory, in the coastal South African city of Gqeberha, formerly known as Port Elizabeth, was celebrated as a solution to the continent’s unequal access to vaccines when it announced a deal to start manufacturing Covid vaccines in November of 2021.

But no purchasers have appeared, as the slow distribution of vaccines in Africa has left health agencies with a backlog of supplies. Commercial production never started, in what officials say is an ominous sign for other African countries that had considered manufacturing Covid-19 vaccines.

Throughout the coronavirus pandemic, many African countries have lagged far behind much of the world in getting their people vaccinated — and some countries have had difficulty distributing what doses they did get.

Less than 20 percent of the total population in Africa is fully vaccinated against the coronavirus. Officials and politicians blamed wealthy countries for hoarding vaccine doses when vaccines first became available. Countries reliant on donations of vaccines were at the back of the line. Building the capacity to manufacture vaccine doses in Africa was billed as a solution to this vaccine inequity as well as a way to prepare for future pandemics.

South African drug maker Aspen Pharmacare was lauded when it signed a deal with Johnson & Johnson in November last year that would allow it to produce and market the single-dose vaccine as Aspenovax. The vaccine, identical to the one created by Johnson & Johnson, was intended for the African market.

But the initial enthusiasm has not led to purchases, for complicated reasons.

South African president Cyril Ramaphosa, speaking on Thursday at a global summit on the pandemic organized by the White House, blamed “international agencies” for failing to buy vaccines from a pioneering African manufacturer.

“This immediately just devalues the whole process of local manufacturing and local production of vaccines. This, ladies and gentlemen, must change,” Mr. Ramaphosa said.

Gavi, an international nonprofit agency that manages vaccine purchasing deals for low-income countries through the Covax alliance, said in a statement that under its existing contract with Johnson & Johnson, the company has provided vaccines from sources of its choosing. Of the nearly 450 million vaccine doses Gavi has shipped to Africa, 28 percent have been the Johnson & Johnson vaccine, second only to Pfizer-BioNTech’s, at 30 percent.

Gavi said in the statement: “Covax is still under contract with J & J and we would be very happy for any doses that we are still expecting to be supplied by Aspen. We have communicated this to J & J. However, again this is solely a decision that rests with J & J.”

But given the unpredictable demand for Covid vaccines in Africa, Gavi also said, it could not guarantee that it would be in a position to purchase directly from Aspenovax in the coming year.

Vaccine procurement contracts are protected by nondisclosure agreements that have made the process opaque.

Johnson & Johnson has not yet responded to a request for comment.

U.S. regulators have restricted use of the Johnson & Johnson shot, preferring the Pfizer-BioNTech and Moderna vaccines instead. But recent evidence suggests that over time, the Johnson & Johnson vaccine is preventing infections and illnesses about as effectively as the others, and may prove to offer more durable protection.

Gavi said the U.S. regulators’ limitation would not discourage it from purchasing the single-dose vaccine if demand increased. Adenovirus-based vaccines like Johnson & Johnson’s do not need below-freezing storage like the Pfizer and Moderna vaccines, both mRNA vaccines. That makes it an attractive choice in countries that lack the needed medical infrastructure, the nonprofit added.

Stavros Nicolaou, Aspen’s head of strategic trade development, said that if there are no orders in the next six weeks, Aspen plans to repurpose the sterile production line to produce anesthetics and other drugs. The company said it feared that not all of the 500 staffers trained to produce vaccines could be redirected to other manufacturing lines.

“That good will” that accompanied the initial launch, said Mr. Nicolau, has “not been matched with orders from the multilateral procurement agencies.”

In talks with multilateral agencies, Aspen was hoping orders would roll in at the beginning of 2022, in time for it to start producing commercial batches of the Aspenovax vaccine by the end of March.

But by then agencies had already secured enough vaccines from other sources to begin large-scale vaccination drives. Those efforts were hobbled by logistical and other issues that slowed vaccinations, leaving the continent with a glut of doses that is ongoing.

Recent studies found that more than two-thirds of Africans had already had a Covid infection before the Omicron wave, but reported death rates remain among the lowest in the world. That, combined with the lengthy wait for vaccines, has driven down demand and it remains low. Some public health officials advocate scaling back large-scale vaccination efforts and focusing instead on the most vulnerable groups.

As a result, the African Union and agencies like Covax have not placed new orders in recent months with other manufacturers either.

“Our disappointment remains that Aspen’s capacity has been known for quite some time and we would have liked to be scheduled in the procurement process,” said Mr. Nicolau.

Aspen’s vaccine “came very late in the process,” said Dr. Abdou Salam Gueye, director of emergency preparedness and response for the W.H.O.’s Africa region. The global health agency and its partners have shifted their focus to delivering vaccines to patients, rather than procuring additional vaccine doses, he added.

Unicef, which is the largest single vaccine buyer in the world, said the South African-made vaccines had yet to go through all the W.H.O. approvals.

“The Aspen products have not yet received an ‘Emergency Use Listing’ from W.H.O. and cannot be procured by UNICEF until that is in place,” said Gisela Henrique, Unicef’s deputy director of supply division.

Dr. John Nkengasong, the outgoing head of the African Union’s Centres for Disease Control and Prevention, recalled a 2021 summit where thousands participated in a Zoom call to pledge to build up Africa’s vaccine manufacturing.

Dr. Nkengasong, who said he has been in talks with Aspen as well as with African leaders to find a solution, described the lack of orders as “very worrying,” adding that it would discourage other African companies from developing the capacity to manufacture Covid-19 vaccines.

“If those companies are not supported, the whole pronouncement and commitment that we all made at the height of this pandemic would really not have been translated into facts,” he said.

Reporting was contributed by John Eligon from Johannesburg, Lauren McCarthy from New York and Stephanie Nolen from Halifax, Nova Scotia,