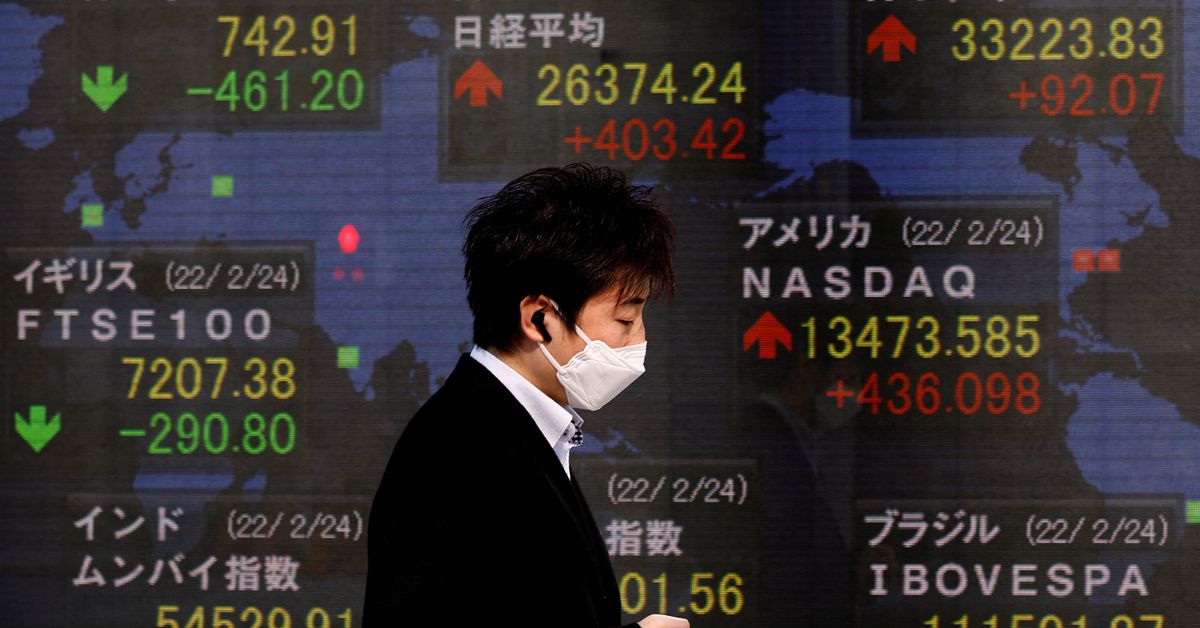 A man wearing a protective mask, amid the coronavirus disease (COVID-19) outbreak, walks past an electronic board displaying stock market data outside a brokerage in Tokyo, Japan, February 25, 2022. REUTERS/Kim Kyung-Hoon/

TOKYO, Aug 5 (Reuters) – Japanese companies are temporarily shutting offices or suspending production as they battle a record wave of COVID-19, disrupting businesses in a country that has until now weathered the pandemic better than most advanced economies.

Japan’s tally of COVID cases has surged past those of other countries as the full impact of the BA.4 and BA.5 variants dominating around the world hits home. Japan had more than 1.4 million new COVID cases over the past week, World Health Organization data showed.

Companies are scrambling to cope.

“We have divided the meal time into several time slots and have told workers to sit in one direction and not to talk at all,” Subaru Corp (7270.T) CFO Katsuyuki Mizuma told reporters recently, describing how the automaker was trying to fend off infections and work stoppages.

Newly diagnosed COVID cases reached an all-time high for Japan of almost 250,000 on Wednesday. Hospitalisations and deaths are on the rise too but not as drastically as in previous waves because of the prevalence of vaccinations and booster shots.

Japan has had an enviable record in its response to COVID, avoiding the disruptive lockdowns and big death tolls that have accompanied the pandemic elsewhere.

The country of 125.8 million people has had more than 32,000 deaths, a fraction of the tolls in the United States and Britain, for example.

The latest outbreak will likely show whether it can maintain its flexible response aimed at “living with corona” and limiting the economic impact, particularly if the disruption now being felt gets worse of lasts for an extended period.

“There is still a shortage of semiconductors and the spread of the coronavirus is currently increasing,” a Toyota spokesperson said last week.

Health authorities advise that those who test positive should quarantine for 10 days and their close contacts should isolate for at least five.

Toshihiro Nagahama, chief economist at the Dai-ichi Life Group, said production and retail would feel some pain as infected people and their close contacts stay at home.

“As infections and close contacts increase, that will certainly weigh on people’s confidence to go out for meals, shopping and the like,” he said.

The disruption has particularly important implications for a job market at its tightest in decades, especially for the small and medium-sized enterprises that make up the majority of Japan’s companies. read more

Yoshiaki Katsuda an occupational health expert at the Kansai University of Social Welfare, said big companies can hire temporary workers to replace those who have to take time off but they are still vulnerable to supply chain headaches.

“If smaller companies that supply products … have to shut down for a long period, then the production of bigger companies could be affected,” he said.

The wave of infections is snarling transport too.

The central government has devolved authority on infection controls to prefectural governments, letting them step up precautions as they see fit. Twelve prefectures have enacted the measures with a focus on curbing risks to the elderly.

Support for Prime Minister Fumio Kishida has sagged in recent polls as COVID surged, but a strong showing for the ruling Liberal Democratic Party in elections last month has given him some breathing room, said Tetsuya Inoue, a senior researcher at Nomura Research Institute.

“For the moment, Mr Kishida and his administration are prioritising the maintenance of economic activities rather than to return to very strict measures against COVID,” Inoue said.

Inoue said that whatever the drag on the domestic economy that the wave of infections is causing, the bigger problem for Japan was lockdowns in China and the knock-on effects that they have on supply chains.

Relief for Japan’s companies and the wider economy could be in sight. Health experts project this wave of infection to peak early this month.

“Given current trends, it is unlikely that infections will continue to expand over the long term, and there is little need to impose strict behavioural restrictions,” doctors at the Tokyo Foundation for Policy Research wrote in a recent paper.