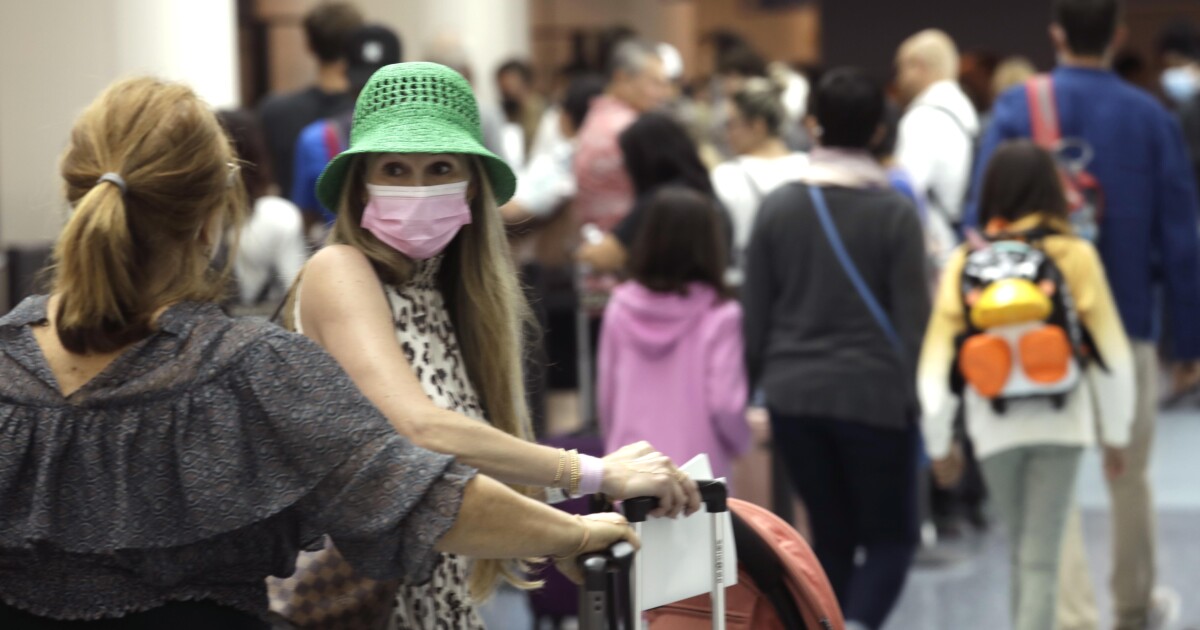 The mandate that international air travelers to the U.S. test negative within a day of boarding their flights expires Sunday at 12:01 a.m. Eastern time, according to a senior administration official. The official, speaking Friday on the condition of anonymity to preview the formal announcement, said the Centers for Disease Control and Prevention had determined the rule was no longer necessary but could reinstate it if a troubling new variant emerges.

The policy change is big news in Los Angeles, which has ranked among the top three U.S. destinations for international travelers, who typically stay longer and spend more than domestic visitors. Before the pandemic, a burgeoning middle class in China helped fuel a surge in Chinese tourists in Los Angeles, spending an average of about $6,900 per visit, according to the U.S. Travel Assn., a trade group for the country’s travel industry.

“Our City of Angels is ready to roll out the red carpet for travelers from around the world,” Adam Burke, president and chief executive of the Los Angeles Tourism and Convention Board, said in response to the news.

In 2019, Los Angeles County hosted 7.4 million international and 42.6 million domestic visitors, according to the board. International travelers spent $11.6 billion dollars that year, about 56% of all tourism spending even though they represented only about 14% of all visitors. In 2020, the number of visitors dropped to 27.7 million, with tourism spending plunging to $10 billion. Tourism experts estimate the county welcomed about 40 million visitors in 2021.

The Biden administration put the testing requirement in place last year as it moved away from restrictions that banned nonessential travel from several dozen countries — most of Europe, China, Brazil, South Africa, India and Iran. It came in conjunction with a requirement that foreign, nonimmigrant adults traveling to the United States be fully vaccinated, with only limited exceptions.

The initial mandate allowed those who were fully vaccinated to show proof of a negative test within three days of travel, and unvaccinated people had to present a test taken within one day of travel. In November, as the highly transmissible Omicron variant swept across the world, the Biden administration toughened the rules and required all travelers, regardless of vaccination status, to test within a day of travel to the U.S.

Airline and tourism groups have been pressing the administration for months to eliminate the testing requirement, saying it discouraged people from booking international trips. Many other countries have lifted their testing requirements for fully vaccinated and boosted travelers in a bid to increase tourism.

The move, however, comes amid a rise in COVID-19 cases and hospitalizations in Los Angeles County.

Response to the imminent policy change has been positive among the local tourism industry.

Danny Roman, who runs Bikes and Hikes L.A., a touring company for visitors to the city, struggled so much during the pandemic shutdown that he was forced to add a bicycle sales and repair shop to his tour business to make ends meet. He hopes the change in U.S. testing policy will bring back the kind of thriving businesses he had in 2019.

Before the pandemic, international visitors accounted for about 60% of his business.

“We are beyond excited,” he said. “We are hoping this kick-starts our summer season as we depend on Europeans, Australians and Canadians to drive home sales.”

“We are eager to welcome the millions of travelers who are ready to come to the U.S. for vacation, business and reunions with loved ones,” Nicholas E. Calio, president and chief executive of Airlines for America, a trade group for the nation’s airline industry, said in a statement Friday.

“Today marks another huge step forward for the recovery of inbound air travel and the return of international travel to the United States,” Roger Dow, president and chief executive of the U.S. Travel Assn. said in a statement.