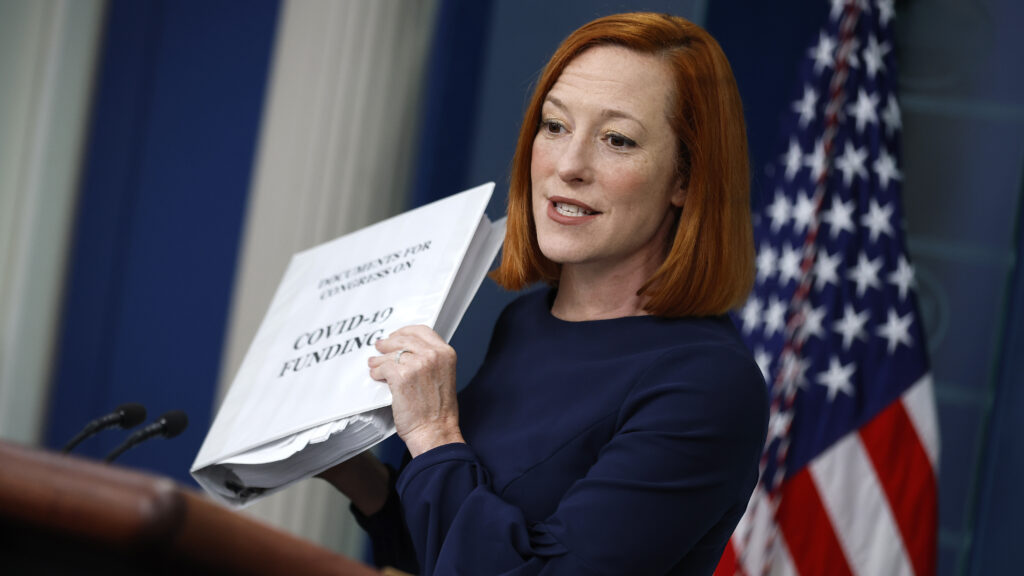 WASHINGTON — It was a striking visual for the television cameras. White House Press Secretary Jen Psaki took to the lectern, waving a thick, 385-page binder as evidence that contrary to Republicans’ accusations, President Biden had been transparent with Republicans about how his administration had spent billions of dollars to fight Covid-19.

“You can have access to this for a prop if you would like it as well,” Psaki offered to reporters. “We’ll make copies for you.”

But when STAT took the White House up on the offer, officials refused to make copies of the binder. In fact, it wouldn’t even let STAT take photographs of the contents. Instead, the administration gave this reporter one hour to look through the nearly 400 pages of budget tables and congressional correspondence. White House officials offered the review in a small conference room in the Eisenhower Executive Office Building across the street from the White House, under the supervision of a budget office employee.

STAT was the only news outlet that requested to see the documents.

The relatively brief review of the binders’ contents offers a window into what information the White House shared with which lawmakers during an explosive, drawn-out fight over Covid-19 relief funding — a political melee that led to the government delaying the purchase of Covid treatments, the expiration of funding to treat and test uninsured patients, and the abandonment of efforts to support the global vaccination effort.

The documents show that before three dozen Senate Republicans publicly blasted the White House for not being transparent, the GOP’s top member on the Senate health committee, Sen. Richard Burr (R-N.C.), had already requested and received three separate, detailed tranches of responses from the White House about how it had spent Covid-19 funding.

While the White House included documents in the binder that could be embarrassing for Republicans, documents that could have better illuminated the White House’s spending strategy were left out. There were none of the documents that would have explained how White House officials chose to move around money between accounts, which they did repeatedly. Those documents would indicate that the funding wasn’t spent exactly how Congress intended. The Biden administration was also supposed to send Congress plans for how to spend Covid-19 relief every two months, but those documents weren’t included either.

The White House did not formally comment about its restrictions on the binder, though an administration official offered that STAT could return to view the documents again at a separate time.

The controversy started in early March, when the White House was gearing up to ask Congress for an additional $23 billion in Covid-19 relief funding. Three dozen Republicans, led by Sen. Mitt Romney (R-Utah), accused the White House of not being transparent enough about all the funding Congress had already allocated to the pandemic. They asked for a “full accounting” of unspent funds, money spent on vaccines and testing, and about plans to make real-time data about spending public before they would support any new Covid response funding.

However, there’s no indication that most of the Republican lawmakers who signed the letter had ever before asked for any spending information from the White House. The exception was Burr. The Biden administration provided detailed budget information in response to inquiries from Burr about Covid-19 spending on Jan. 13, Jan. 28, and Feb. 8.

Despite the disclosures, Burr signed the critical letter anyway. Burr’s office did not respond to a request for comment about the documents.

Soon after Republicans accused the White House of lacking transparency, the administration provided documents to several lawmakers in rapid succession: Sen. Susan Collins (R-Maine) and Romney on March 7, and to Republicans on the Senate health committee on March 8.

The largest disclosure, of 271 pages, came in a March 18 letter to Burr. It included detailed information about the amounts contracted for vaccines and therapeutics.

One disagreement appears to have been over whether the Biden administration would disclose the individual prices paid for tests and vaccines. The Biden administration wrote to Burr that funding levels were provided in overall amounts instead “to maintain compliance with the Trade Secrets Act and to protect market moving information.”

Republican and Democratic leadership of budget committees in the House and Senate received information about funds remaining in July 2021, October 2021, and January 2022, the official said, and appropriators and the leadership of health committees got notice that balances were low in January and February.

Covid hasn’t given up all its secrets. Here are 6 mysteries experts hope to unravel

The documents also make it clear that the White House was running far lower on Covid-19 relief funds earlier this year than it disclosed, publicly.

The White House was already skimping on purchases for therapeutics from Pfizer because of budget constraints by January 4. Officials sent budget tables to lawmakers on relevant committees in Congress in mid- to late January showing pandemic response money was running low.

The line the White House chose in public — that officials stuck to for weeks — was that there was enough money to fight the immediate Omicron surge, and that more funding would be requested when it was needed. An example from Jan. 12: “We have the money that we need to fight Omicron. As the president has always said, we will do everything we need to do to beat this pandemic. And if we do need more money at some point we will request that money,” then-White House Covid-19 Response Coordinator Jeff Zients told reporters.

The formal, public request of $22.5 billion didn’t come until nearly two months later, which was late in a fraught process of negotiations over the government spending bill.

Exclusive analysis of biopharma, health policy, and the life sciences.

Even that official request sowed some confusion — three rank-and-file Democratic staff said they couldn’t make sense of why the White House’s ask was so much lower, when just a week before administration officials told lawmakers they needed $30 billion.

Since that bill imploded, the support for the Biden administration’s Covid response has whittled down further.

Now, a possible bipartisan Covid-19 relief package in the works is only $10 billion — and the government still owes Pfizer roughly $5 billion for therapeutics. Lawmakers have bickered over how to offset the costs of that package for weeks, and it’s now bogged down in controversy over immigration policy.

If it does pass, the bill will have new, more stringent transparency requirements. The White House would have to report to Congress in advance if they enter into a contract worth more than $50 million, and send lawmakers a report once a month with detailed information about spending along with an inventory of Covid-19 vaccines, therapeutics, and tests.