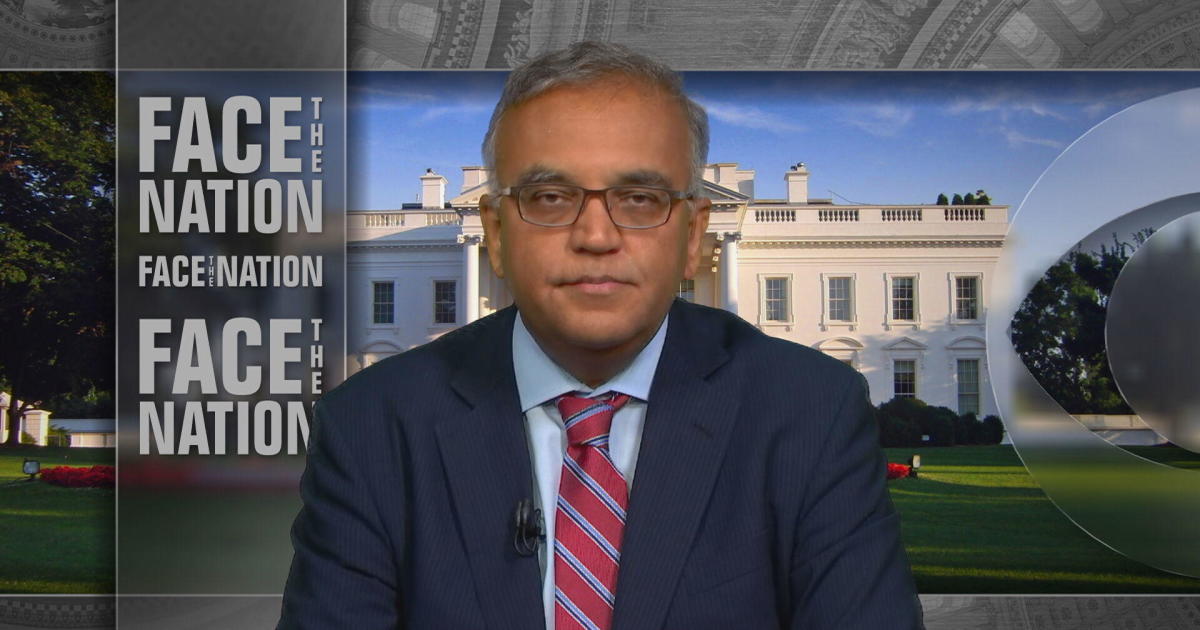 Washington — Dr. Ashish Jha, the White House COVID-19 response coordinator, confirmed Sunday that President Biden was infected with the highly transmissible BA.5 subvariant of the coronavirus but said the president is “doing just fine” as he continues to isolate.

“Thank goodness, our vaccines and therapeutics work well against it, which is why I think the president’s doing well,” Jha said in an interview with “Face the Nation.” “I checked in with his team late last night. He was feeling well. He had a good day yesterday. He’s got a viral syndrome, an upper respiratory infection, that is, and he’s doing just fine.”

While Jha said he has not received updates yet as of Sunday morning, Mr. Biden was “feeling much, much better” through Saturday night.

The White House announced last Thursday that Mr. Biden, who is 79, tested positive for COVID-19 after managing to avoid getting infected for more than two years since the start of the pandemic. Dr. Kevin O’Connor, the president’s physician, said Mr. Biden began taking Paxlovid, an antiviral treatment, on Thursday and was taking Tylenol.

O’Connor said in a letter Saturday that the president was experiencing a sore throat, runny nose, loose cough and body aches, though his pulse, blood pressure, respiratory rate and temperature were normal.

Mr. Biden, who is vaccinated and has received two booster shots, has been isolating at the White House.

Since testing positive for COVID-19, the White House has provided daily updates on the president’s health, and Jha said the administration believes it’s important for the American people to be kept apprised of Mr. Biden’s condition. If the president has “persistent symptoms” or if they interfere with his ability to carry out his duties, Jha said the White House would “disclose that early and often” with the public.

“But I suspect this is going to be a course of COVID that we’ve seen in many Americans who have been fully vaccinated, double boosted, getting treated with those tools in hand,” he said. “You know, the president has been doing well, and we’re going to expect that he’s going to continue to do so.”

The BA.5 subvariant has been fueling a rise in new COVID-19 cases in numerous states and makes up roughly 80% of infections, Jha said, though most public health officials and state and local leaders have stopped short of reimposing mask mandates.

Jha reiterated, though, that masks are an effective way to slow transmission and said it’s “very prudent” of Americans to wear masks indoors, particularly in crowded places with poor ventilation.

“I think that’s a very important and effective way of reducing transmission, protecting yourself as well,” he said.

In addition to continuing to fight the COVID-19 pandemic, the World Health Organization officially declared monkeypox a “public health emergency of international concern,” the highest level of alert. The Department of Health and Human Services has stopped short of declaring the monkeypox outbreak a public health emergency, though Jha said it’s something the Biden administration “might invoke.”

“Right now we have over 2,000 cases, but we have ramped up vaccinations, ramped up treatments, ramped up testing, and we’re going to continue to look at all sorts of policy options,” he said. “Right now, we think we can get our arms around this thing, but obviously, if we need further tools, we will invoke them as we need them.”

Jha said ensuring widespread availability of testing for monkeypox is crucial to containing the disease, and said the U.S. now has the capacity for 80,000 tests per week. There are also 300,000 vaccine doses, he said.

“The plan here is very straightforward. The plan is to eliminate this virus from the United States,” Jha said. “I think we can do that. We’ve got the vaccines, and we’ve got the diagnostic tests. And you’re gonna just see more and more action from the administration. What I will remind is the first case was about two months ago, there has been very substantial ramping up of response in the last two months with more coming with a very specific goal, which is to eliminate the virus from the United States.”