The Perfect Enemy | What we know and don’t know about the European Political Community
Skip to content
December 3, 2022
Read Time:6 Minute 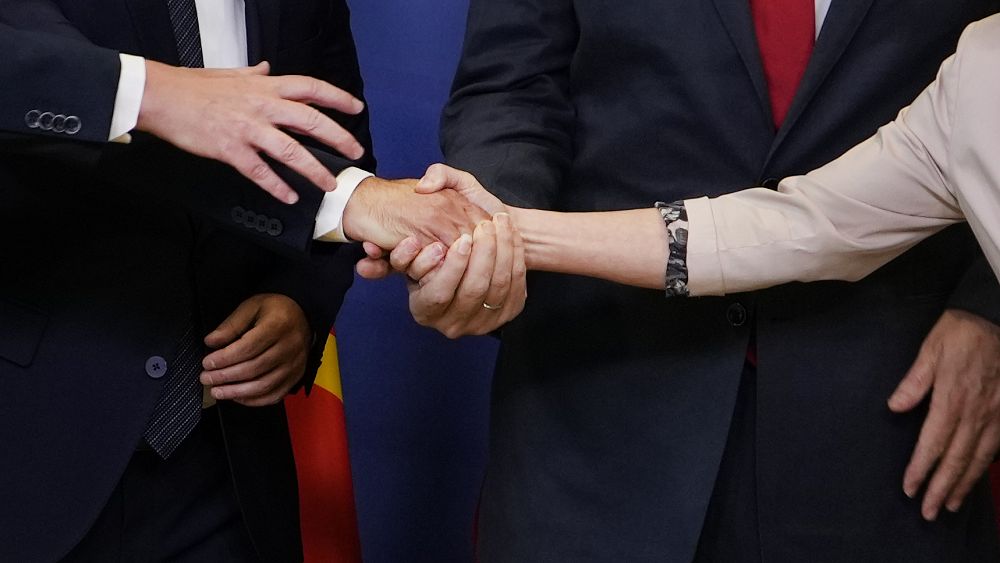 More than 40 European leaders are expected to gather in Prague on Thursday for the inaugural meeting of the European Political Community but much remains unclear over what this new organisation actually stands for and can achieve.

This first meeting is being held just five months after the community was first pitched by Emmanuel Macron as a response to Russia’s war in Ukraine and the complete geopolitical rethink it triggered across European capitals.

This new format was also meant to soothe the feathers of eastern EU candidate counties, ruffled by Ukraine, Moldova and Georgia’s fast-tracked applications for EU membership with the French president stressing that it was not to be an alternative to accession but rather allow for deeper cooperation with democratic countries across the continent.

For Steven Blockmans, director of research at the Centre for European Policy Studies (CEPS), the rapidity with which this meeting was organised suggests that it signals that there are “issues here which transcend the bilateral disputes and which concern the future of the European security order.”

It also shows “Russia and Belarus that the rest of Europe is basically uniting in defence of that European security order,” he added.

A new forum to discuss the future of the continent

Most of the commentary written since Macron’s Europe Day announcement has been fairly positive about the proposal.

Both the COVID-19 pandemic and Russia’s war in Ukraine have led to accusations that the EU has been too complacent about its own dependencies and about the influence of foreign actors such as Russia and China in its own backyard.

This new organisation would therefore be a “welcome addition to the international organisations and other inter-governmental conferences that exist,” Blockmans said.

Most European countries already belong to one or several organisations including the EU, the NATO military alliance, the Council of Europe, which aims to uphold human rights and rule of law in its member countries, and the Organisation for Security and Co-operation in Europe (OSCE) whose mandate includes issues such as arms control, freedom of the press, and free and fair elections.

But the latter two have been ineffective at reigning in Russia.

Moscow left the Council of Europe hours before a vote for its expulsion while the OSCE, whose decisions are taken on a unanimity basis, “has been hijacked for the last couple of years by Russia and its ally Belarus, in addressing issues of dispute settlement of conflict resolution,” according to Blockmans.

The European Political Community or EPC, as envisioned by Macron and European Council President Charles Michel in recent speeches, would instead offer space for political and strategic discussions about the future of the continent.

“It really has the potential to build a new forum for strategic exchange and policy-making on a pan-continental scale, which is very much what the geopolitical situation requires at the moment,” Daniela Schwarzer, executive director for Europe and Eurasia at Open Society Foundations, told Euronews.

“We know Europe didn’t invest enough in its own neighbourhood for a long time,” she went on. “So if this European Political Community becomes a forum and a place for policymaking, that actually shows the EU’s neighbours that it’s interesting to partner more closely with the EU, that will create more stability in the EU’s neighbourhood.”

Still, little light has been shed since Macron’s 9 May address on the shape and scope the political community will have going forward.

One of the few things that have been released is the guest list of invited participants featuring 44 names.

The 27 EU countries have, unsurprisingly, been invited as well as third countries currently in the various stages of EU accession — Albania, Moldova, the Republic of North Macedonia, Montenegro, Serbia, Turkey and Ukraine — or that have aspirations of joining the bloc: Georgia and Kosovo.

Close EU allies Switzerland, Norway, and Iceland also made the cut, as did former EU member Britain and the leaders of Armenia and Azerbaijan. Finally, the presidents of the European Council and European Commission were also invited.

The European Council, which co-organised this first meeting with the Czech Republic, said in the invitation letter that this meeting aims to provide a platform for “political coordination” by putting leaders “on an equal footing”.

This is in order to foster cooperation on areas of common interests and thus strengthen “the security, stability and prosperity of Europe as a whole”.

Leaders will start by meeting in a plenary session in the early afternoon before breaking up for roundtable discussions that will cover topics including peace and security, energy and climate, the economic situation, migration and mobility.

They will then have the opportunity to hold bilateral meetings before reconvening for a closing plenary session held over dinner.

What we don’t know

Pretty much everything else is up for debate.

The European Council has already said, for instance, that there will be no joint statement released at the end of the meeting to outline if leaders reach a consensus on the topics broached or on the future of the organisation itself.

“The best outcome of the first meeting would be, I think, to agree on a sort of minimal terms of reference under which condition they would meet again because there is a real need to redefine the EU’s relationships with its neighbours in a fresh way,” Schwarzer said.

How it will be structured

The risk is that this meeting could be a one-hit wonder without a proper structure in place such as a secretariat that would do the administrative work and organise the subsequent meetings.

The EU Council is of the opinion that EPC leaders should meet twice a year. The compromise scenario would be that it is modelled on the G20 with summits organised on a rotating basis by each participating country with the host alternating between an EU member state and a third country.

How decisions will be made

There is also a question of budget and whether or not there should be a common pot of money to pay for the different projects that may be undertaken or whether countries should just pitch in depending on their interests.

And that leads to how decisions are made: Should they be taken as a group of more than 40 or should so-called “coalitions of the willing” be allowed to proceed with their own projects?

Much will also depend on the type of voting required for decisions to be taken: unanimity or qualified majority.

This is currently the subject of much soul-searching in the EU where decisions on foreign policy including sanctions as well as on defence, membership, and budget require the backing of every single member state. Critics of unanimity voting say this has made the bloc slow to adapt and respond to crises and several leaders have now called for a revision of the treaties to scrap this rule.

“I think it shouldn’t have the ambition to organise everything in groups of over 40 countries,” Schwarzer said.

The criteria for inclusion

But even which countries should be included and on what basis is unclear.

EU candidate countries, for instance, are expected to espouse a similar line on foreign policy, especially when it comes to sanctions. Yet Serbia, which has been negotiating EU membership since 2014, has so far refused to impose any sanctions on Moscow over its full-scale invasion of Ukraine.

For Schwarzer “a commitment to the fundamental values enshrined in the EU treaties, the Charter of Human Rights, of the Council of Europe, and the participation in the sanctions policy vis a vis Russia should be a prerequisite.”

Meanwhile, Blockmans argued that the list of invited participants shows that “the initial references by Macron to bring democratic nations of Europe together around the table has also been left behind otherwise, one would not see the leaders of Azerbaijan, potentially even Turkey, around the table” and that the focus of the EPC is shifting from a democratic alliance to a geopolitical alliance.

“And, of course, geopolitics are not necessarily defined along the lines of respect for fundamental freedoms and democracy, but rather in terms of power and the ability to exert power,” he stressed.