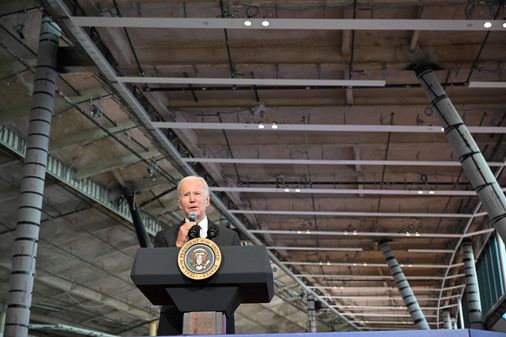 President Biden on Monday touted his bipartisan infrastructure law during remarks at Logan International Airport – which is getting $50 million for Terminal E upgrades under the bill – ahead of his speech planned later in the day in Dorchester on his Cancer Moonshot Initiative.

“This airport … is part of a system that moves goods and services for key industries in the area like medical supplies, technology products, and seafood,” Biden said at Logan. ” … We’re creating a modern terminal worthy of America’s city on the hill.”

He added, “We’ll have a first-class airport here in very short order.”

The bipartisan infrastructure law funnels a total of $62 million to Logan Airport, including $50 million for the international terminal and $12 million to improve roadways around the airport. The upgrades will create 5,900 jobs, officials said.

The Logan Airport construction is the largest of the 85 airport projects funded by the first billion dollars of the infrastructure bill, said Mitch Landrieu, a senior advisor to the president and White House Infrastructure Coordinator.

“In 2019, 42 million people flew through this airport,” Biden said at Logan. “Before the pandemic it was the 16th largest airport in the United States. It’s more than an airport. It’s an economic engine. In 2019, $17 billion worth of exports and imports flowed through here. The airport supports 162,000 jobs across the region. … It’s critical to our economy and to your economy. But it needs a significant upgrade to accommodate the passengers flying in and out from all over the world.”

Biden said the Logan work will include more ticket counters, ramps, rails, elevators, wheelchair-accessible shuttles and buses, a new HVAC system, and electric-powered gates to increase energy efficiency, among many other upgrades.

“Today we start to see a different way that we can make investments to support a critical piece of infrastructure in our airport that make it healthy, clean, and green, and ensure it benefits our communities,” Wu said during her remarks at the airport.

Baker, a Republican, highlighted the importance of the federal funding, including its impact on climate resiliency in the state.

“It will dramatically change the way we live, work, and in some cases, play, here in Massachusetts,” he said.

Biden’s later speech on the Cancer Moonshot Initiative at the John F. Kennedy Presidential Library will come 60 years to the day of President John F. Kennedy’s 1962 moonshot address at Rice University in Houston.

“I’m heading from here to the Kennedy Library to talk about the president’s moon launch speech, because I’m launching a similar initiative on cancer,” Biden said. “American people, because of our failure to think big, in my view, have begun to wonder, ‘can we really do anything?’”

Americans, Biden said, must “remember who the hell we are.”

He said the investments in infrastructure and in the Inflation Reduction Act will spur job growth.

“I can’t think of any time we’ve ever given the American people an even shot, [and] they haven’t stepped up to the ball,” Biden said. “I can’t think of one single time when Americans, given an opportunity, they haven’t taken advantage of it. So folks, together I really believe that we’re building a better America.”

But the current state of play has China thinking the US is on its last legs, Biden said, noting that not one American airport ranks among the world’s top 25.

“What [in] the hell’s the matter with us?” Biden said. ” … We wonder why folks in China and others think we’re a spent economy.”

This isn’t the first time Biden has talked up his cancer fighting initiative in Boston.

In October 2016, Biden delivered remarks on the effort at the Edward M. Kennedy Institute for the U.S. Senate next door to the JFK library.

Presidential efforts to reduce cancer deaths and comparisons to the space race began when President Richard M. Nixon said in a December 1971 address that “the same kind of concentrated effort that split the atom and took man to the moon should be turned toward conquering this dread disease.”

During his address at the Edward Kennedy Institute, Biden reflected that Nixon’s effort achieved little at first, but leaps in technology, much of them achieved in Boston, had changed the outlook.

“And with this moonshot I believe we have a clear strategy on how to move ahead,” Biden said at the time.

The cancer initiative is personal for Biden, who lost his son Beau Biden to brain cancer in 2015.

Terminal E first opened in 1974, when Logan Airport served 1.4 million international passengers. In 2019, the airport served more than four times that amount of passengers through the same number of gates.

The president, a Democrat, traveled to Massachusetts last month to talk about climate change at a shuttered coal-fired power plant in Somerset.

Material from prior Globe stories was used in this report.