Washington Gov. Jay Inslee announced Thursday that the state of emergency sparked by the COVID-19 pandemic will end Oct. 31, nearly three years after the Democratic governor first issued the order.

“I’m confident now that we have reached a significant milestone in the Covid effort,” Inslee said at a news conference at the Capitol. “We are now in a position to be able to continue our efforts against Covid in multiple ways without the necessity of an emergency order.”

A vast majority of the 85 orders issued – including most mask requirements, restrictions on commerce and restaurants – had already been previously lifted. An additional 13 health care related orders are set to end Oct. 27, including one that offered flexibility for locations pharmacies could store vaccines. Ten remaining orders, including the underlying emergency order and vaccination requirements for health care and education workers, will remain in place until the emergency order is lifted Oct. 31. 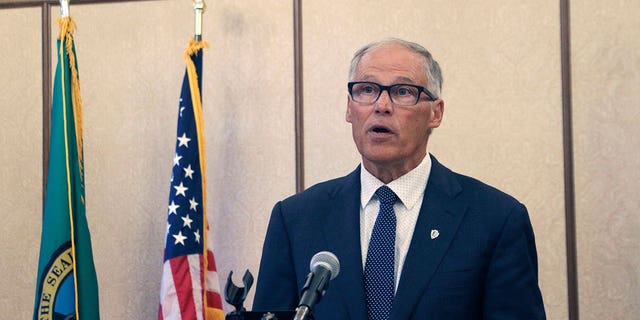 Inslee noted that employers can continue to require vaccination as a condition of employment if they choose, and Inslee had previously announced such requirements would remain an employment requirement for most state agencies.

Masking requirements will remain in place at health care and long-term care settings after the state of emergency ends, under an order that was updated by the state Department of Health last month. That order also will continue to require masking at Correctional and jail facilities when the county in which the facility is located has a medium or high level of COVID-19 transmission.

Inslee also said he is looking at options to ensure there are protections for workers who choose to wear a mask in their workplace.

Republicans, the minority party in both the state House and Senate, had decried the length of time Inslee held on to the broad powers provided under state law, and pushed this year to limit the amount of time a declaration could stay in place without legislative approval. A Senate measure, sponsored by a Democrat, was introduced during the 60-day legislative session earlier this year and would have authorized legislative leaders to terminate an emergency after 90 days if the Legislature is not in session. Republicans argued it was a watered-down bill that wouldn’t have done anything and it died in the House.

House Republican Leader J.T. Wilcox said that while he was glad to see the governor’s announcement, “it should have happened a long time ago.”

“What I hope can happen now is, can the Legislature look at emergency powers reform in a less politicized way and proceed in a way that will strengthen the legislative branch in future emergencies,” he said.

There have been more than 14,100 deaths in the state since the start of the pandemic, and nearly 1.8 million cases of COVID-19 as of this week.

More than 76% of the Washington population age 6 months and older has received at least one dose of vaccine, and nearly 70% is fully vaccinated. About 58% of those age 5 and older who are eligible for boosters have received one, according to the Department of Health.

Cases and hospitalizations have declined significantly since a major omicron-fueled peak in January. But health officials are still urging people to get the new COVID-19 booster that was recently endorsed by the CDC. The new booster is a bivalent vaccine, with half the original vaccine and half protection against the BA.4 and BA.5 omicron versions now causing nearly all COVID-19 infections.

Inslee said that he and his wife, Trudi, both received the new booster Thursday afternoon.