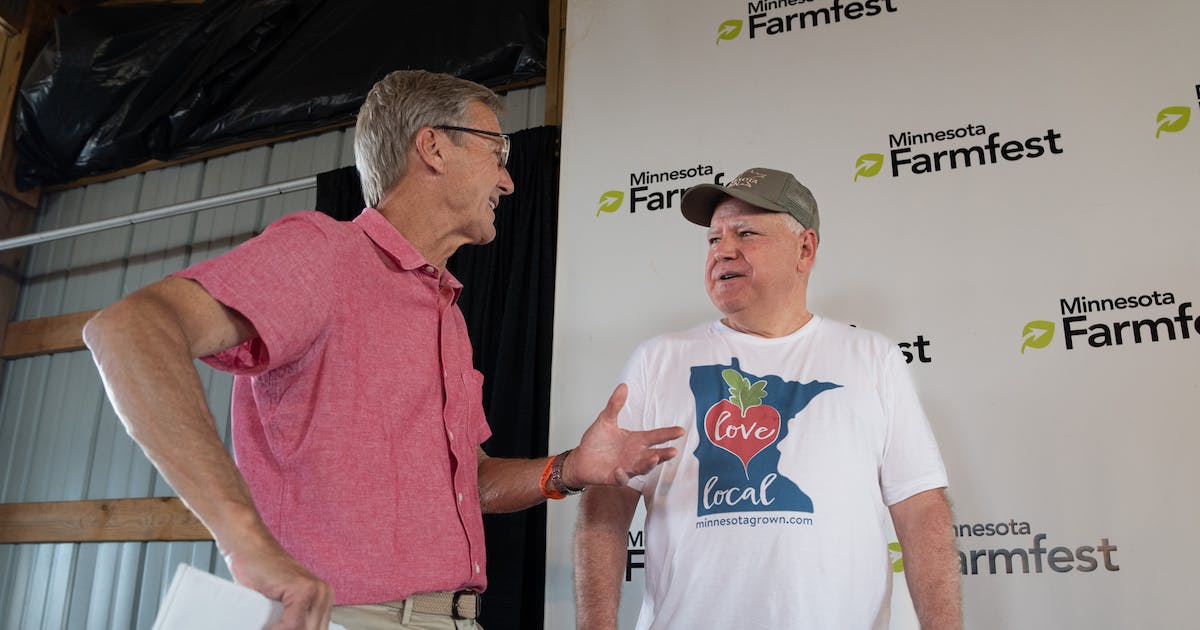 DFL Gov. Tim Walz and Republican opponent Scott Jensen touted their rural roots and tussled over the economy, the COVID-19 pandemic and the future of the state’s workforce in their first debate in the race to be Minnesota’s next governor.

The candidates went head-to-head at the annual agriculture exposition Farmfest, debating for more than an hour in front of a standing-room only crowd. While questions focused on the candidates’ plans to help farmers and rural areas thrive, the conversation repeatedly veered back to COVID-19, with the candidates trading sharp remarks over the other’s response to the pandemic.

“Let farmers farm, let miners mine, let teachers teach and let government get the hell out of the way,” said Jensen, who criticized Walz for shutting down classrooms and businesses during the height of the COVID-19 pandemic and his response to riots that broke out in Minneapolis after George Floyd’s killing.

Walz, who is seeking a second term, shot back at Jensen for spreading “false information” about the effectiveness of vaccines during the pandemic. Walz said it’s easy to criticize decisions after the fact, but he had to take action during unprecedented challenges in state history.

“Having served 24 years in the National Guard, that’s a lot more experience than watching ‘Top Gun Maverick’ and second guessing our men and women putting themselves at risk,” said Walz.

Debating in farm country in the west central part of the state, both candidates made note of their connections to rural Minnesota. Jensen grew up in Sleepy Eye, not far from where the farm show is held. Throughout the debate, the former state senator leaned on his personal experiences as a family physician in Chaska.

Walz, who said it’s his 17th appearance at Farmfest, represented the largely rural First District in southern Minnesota in Congress for 12 years. He said he was a member of the Future Farmers of America, but joked that “my jacket doesn’t fit” anymore.

In his first race for governor four years ago, Walz pulled in some support from areas outside the metro with his “One Minnesota” message. He’s renewing that mantra in his campaign for re-election, but his response to the pandemic has raised his profile and hurt his image in some rural parts of the state.

Jensen said Walz’s “One Minnesota” slogan has become the “antonym of what we’ve seen.” He repeatedly railed against Walz for the state of the economy and said the government incentivized people to not work and “sit on the couch and watch TV” during the pandemic.

Walz fired back and said he would never call Minnesotans “lazy,” citing the healthcare workers who had to respond to thousands of sick patients at the height of the pandemic. “Instead of spreading false information, be a part of the solution,” said Walz.

Jensen, who is not vaccinated, rose in prominence in the Republican Party for questioning COVID-19 death certificates early in the pandemic. After announcing his campaign for governor last year, he focused his message on criticizing lockdown policies and questioning the effectiveness of vaccines.

In addition to the pandemic, the economy and the state’s workforce shortages were dominant themes in the debate.

Walz earned cheers from the crowd when he said the Legislature should come back in a special session and pass a $4 billion tax cut package that was left on the table at the end of the last legislative session. The bill included the elimination of state taxes on social security income. He criticized Jensen for encouraging Republican legislators to walk away from that deal.

“Scott asked Republicans to step away so that it would look like it did not get done,” Walz said. “That’s what’s broken about governance.”

The governor frequently mentioned the state’s low 1.8% unemployment rate — the lowest ever of any state in the nation — but Jensen said that’s not being felt by most Minnesotans.

“The fact of the matter is, if you’ve got the biggest raise you’ve had in three years at 5% and you’re falling behind because inflation is 9.1%, then frankly, the 1.8% [unemployment rate] doesn’t really matter,” Jensen said to applause. “That’s a false metric.”

Both candidates cited broadband, infrastructure and child care as necessities to help rural areas thrive, but Walz said the state also needs to boost funding for schools so smaller communities don’t have to rely on property taxes to help classrooms. Jensen rolled out a 10-point plan for rural economic expansion at Farmfest and said he’d appoint more members of his cabinet from outside the seven-county metro area.

The debate touched on environmental policies, with Walz calling for permanent drought relief for farmers to keep the issue from getting caught up in the political arena. Jensen criticized Walz for his push for clean car standards, which will require auto dealers to get more zero-emission vehicles onto sales lots.

Walz and Jensen worked together on some policies when they were both at the Capitol, which came up during the debate. But it’s the first time the two candidates have shared a political stage since Jensen became a candidate for governor.

Jensen is pushing for more frequent debates in the race, but there are no others scheduled at this point.