The Perfect Enemy | Walker pulls slight lead over Warnock according to polls ahead of Senate race
Skip to content
December 10, 2022
Read Time:7 Minute

The U.S. Senate race between incumbent Sen. Rev. Raphael Warnock (D-Ga.) and his Republican challenger, former NFL great Herschel Walker, has intensified in recent weeks. The 2022 midterm elections come at a time of polarized partisanship and could determine which party gains Senate majority, making the race between Warnock and Walker a primer of future Democratic legislative power that could forecast the 2024 presidential election.

Walker currently leads Warnock by 0.1 percentage points, with Walker polling at 46.6%, while Warnock has 46.5%. Warnock was formerly in the lead, but the margin closed in recent days. Early voting opened on Oct. 17 and ends on Nov. 4, with Election Day on Nov. 8.

In the May Democratic primaries, Warnock defeated his challenger, Tamara Johnson-Shealey, with 96% of votes. Emory University Associate Professor of Political Science Andra Gillespie said she expected Warnock’s popularity among Democrats.

“Raphael Warnock has some incumbency advantage,” Gillespie said. “He’s had an ability to be in the job for a year and a half and can talk about policy issues and things that he advocated.” 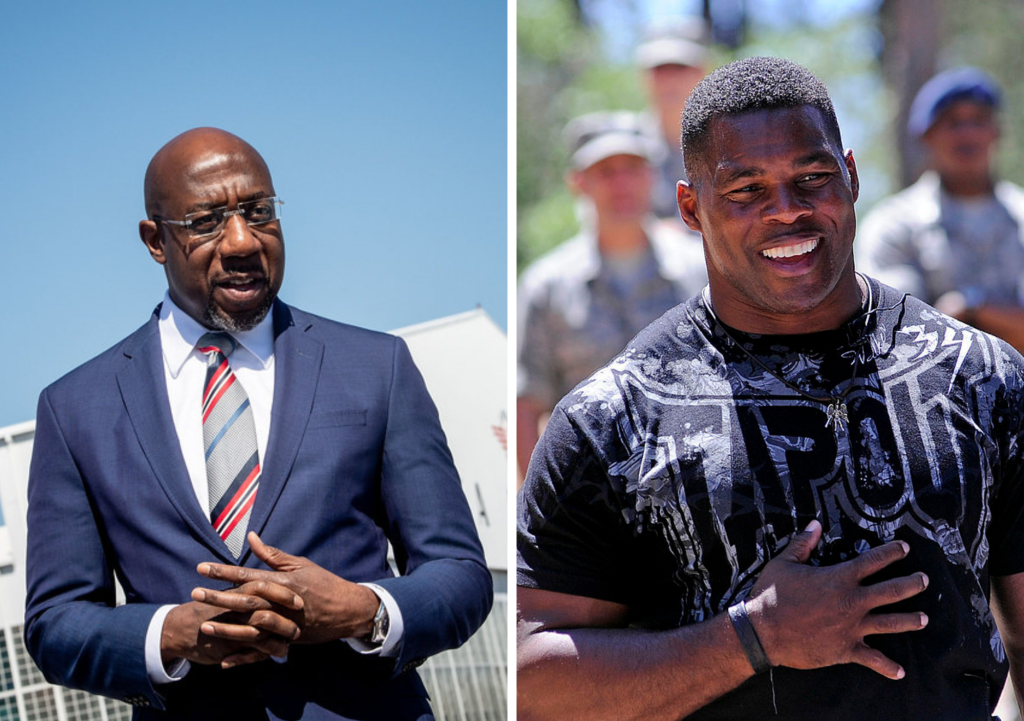 However, Walker entered the race on a different note. Near the beginning of the race, many Americans viewed Walker as an unserious celebrity candidate, drawing comparisons to figures like Caitlyn Jenner, who lost to California Gov. Gavin Newsom in the state’s 2021 recall election.

Warnock and Walker squared off in a debate on Oct. 14. Walker accrued low expectations but surprised many people when he held his own. He offered a rebuttal to a clip of Warnock saying “God is giving us a choice” at a rally, stating that “But also within the Bible, God said choose life. Just like Adam and Eve had a choice, but chose death.”

Both candidates seemed to play it safe by referencing their party’s typical legislative views when asked about abortion, inflation, healthcare and minimum wage.

Gillespie said voters will likely not be dissuaded to vote for Walker by the debate.

“Raphael Warnock did not have a standout performance,” Gillespie said. “It wasn’t like he played verbal jujitsu with him at all. If you kind of like Walker’s very simple way of explaining things, and you happen to agree with his worldview, you may be in a position where you’re either still really conflicted or you might feel more comfortable voting for him.”

Anti-Democratic views and negative sentiments toward U.S. President Joe Biden have grown since his inauguration in January 2021. Factors including economic recovery post COVID-19, foreign policy and his age have left many Americans unsure of who to support, as 75% of Democratic voters want to see a new presidential nominee in 2024. Biden’s approval rating is currently sitting at 42.1%, down from 53% at the start of his term. Around midterms, the last five president’s approval ratings during midterm elections have averaged at 46.2%.

Voters today are primarily worried about the economy — a September Gallup poll reported that 38% of Americans consider “economic problems” to be the most important problem facing the United States today. This view is shared with Georgia voters. According to the Atlanta Journal Constitution, 87% of Republicans and 44% of Democrats said the economy was the one issue plaguing their lives. And with inflation at 8.20%, many Americans are worried about an impending recession. As anti-Biden sentiment grows, Republicans have branded themselves as the party against the president.

Being part of the Democratic party in 2022 has ultimately been Warnock’s biggest weakness, Gillespie noted. The Democratic Party has been closely aligned with Biden’s legislative agenda since January, so belonging to the party has caused Warnock to take some of the blame aimed at Democrats. Warnock’s voting record further perpetuates this sentiment— he has voted with Biden 96.4% of the time.

“The national GOP strategy has been to try to tie all Democrats to Joe Biden, right or wrong, and capitalize on the fact that his approval ratings are underwater,” Gillespie said.

Warnock’s campaign has refrained from media attention; yet, numerous allegations and controversies mar Herschel Walker’s media presence, which he often denies. These controversies include paying for two abortions — which he vehemently opposes — not acknowledging his children and faking being a police officer. Walker has tried to sway away from these controversies by mentioning his quelled dissociative identity disorder.

Though these controversies have become widely known, members of the Emory community, including Jake Golden (26C), don’t forecast a drastic voting shift.

“People who voted Republican will most likely vote for Herschel Walker, regardless of the past,” Golden said.

Gillespie agreed, saying most people are “baked into” who they are going to vote for, especially when the race is set to be decided by a tight margin.

“They may be rationalizing it by saying, ‘Well, it happened a long time ago, he’s forgiven,” Gillespie said. “‘I don’t believe the allegations, because there’s some people who don’t.’ And there’s some people who are like, ‘I don’t care. I want Republicans to take over the Senate and this is a pathway for that to happen,’ and so they are willing to use their vote instrumentally in that way.”

Warnock’s campaign has focused on preventing Republicans from taking over the Senate, which currently has a Democratic majority with 50 Democratic senators and Vice President Kamala Harris, who serves as a tiebreaker. His commercials have highlighted Walker’s violent past and alleged hypocrisy, whereas Walker’s campaign has been more focused on branding him as Georgia’s exemplary Christian political outsider. Walker’s ads have focused on supporting the police, promoting smaller government and “fixing Biden’s border mess.”

Members of the Emory community have taken initiative to get the campus involved with the Senate race. Nine organizations on campus, including Fair Fight U, Asian Pacific Islander Desi American Activists (APIDAA) and the National Association for the Advancement of Colored People, recently collaborated to form Emory Students Vote (ESV), the University’s first non-partisan, student-run voting coalition.

“Hopefully, through the creation of the Emory Students Vote coalition, we can be able to push for an Election Day of Action, in which we encourage faculty to be more flexible regarding attendance policies, as well as assigning work on those days to ensure that students will turn out to vote,” APIDAA co-President Anhhuy Do (24C) told the Wheel last month.

ESV has also advocated for an Election Day “on,” meaning classes wouldn’t be held under the expectation that students would use the time to go vote.

“We think that the most cogent way to kind of address Herschel Walker’s campaign and to bolster Raphael Warnock is to just inform people about what the issues are,” Young Democrats of Emory Co-Communications Director Pranay Mamileti (26C) said. “Walker has been very clearly anti-abortion, anti-Medicaid funding in the state and a lot of issues that Emory students feel very strongly about.”

To promote voter turnout and awareness, Young Democrats of Emory has tabled on Asbury Circle and Cox Bridge to mobilize voters. The group has also posted on social media encouraging students to vote early.

“We sent postcards to voters telling them when early voting starts, where they can submit their early vote ballots and when they can vote generally,” Kravath said. “We did a phone banking event calling Newton County voters — mainly 18 to 30-year-olds — in order to get them out to vote, inform them of voting dates, locations.”

Kravath also noted that it would be beneficial if there were more dissenting voices at Oxford, which he said seems less politically involved than the Atlanta campus.

Six members of Emory College Republicans did not respond to interview requests. The club has promoted open discussion about different issues like abortion, hosting an event on Oct. 20 at the Callaway Memorial Center.

“Even though I don’t think it will revitalize the current political aura, I think it can help build a political community on the campus,” Kravath said. “Discussing it is a very big part of college, growing your values and further, understanding viewpoints around you.”

Managing Editor Gabriella Lewis (23C) is the acting vice president of Fair Fight and had no role in writing or editing this article.