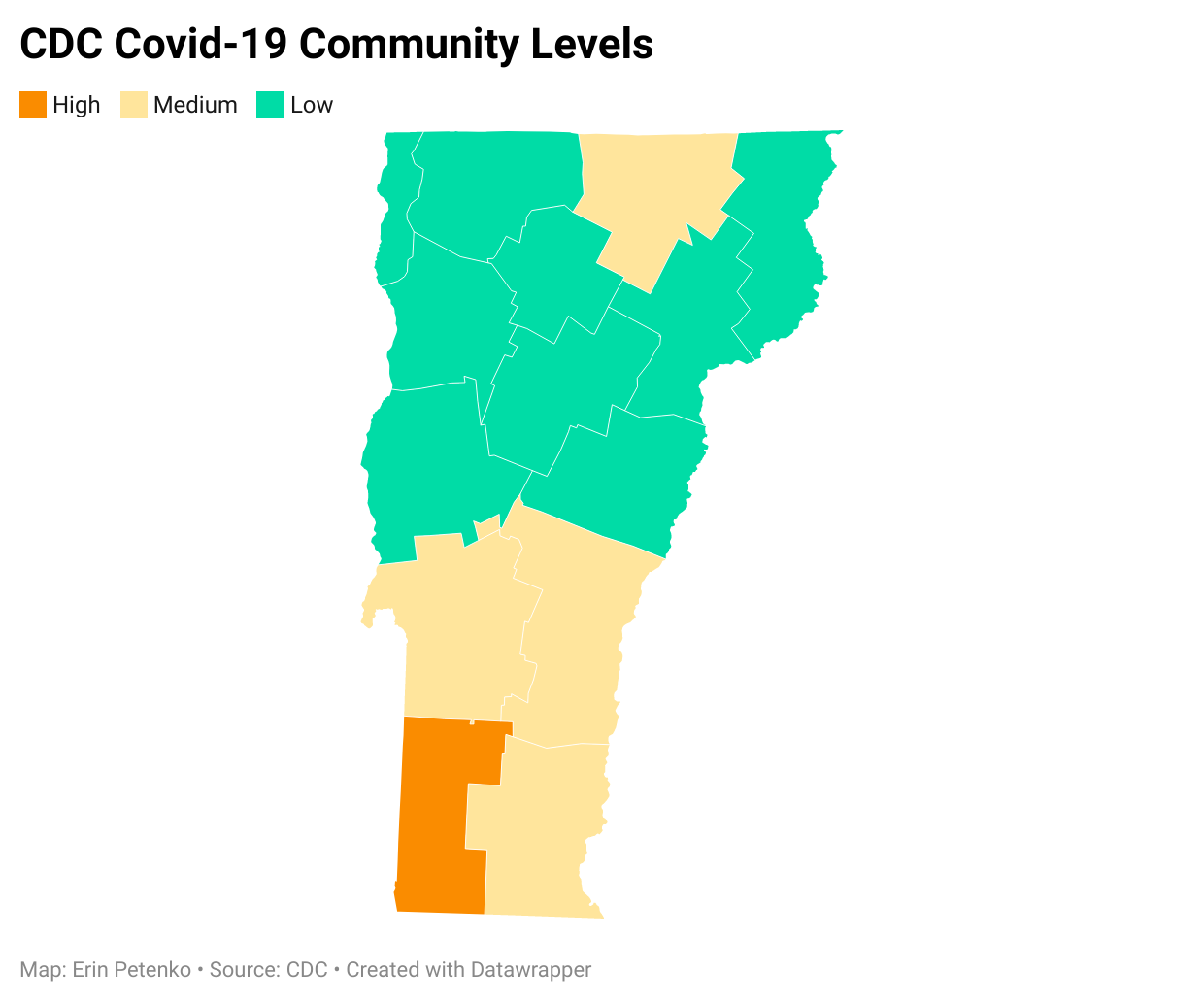 Vermont has “low” Covid-19 community levels, according to the latest weekly surveillance report from the state Department of Health.

The report, based on data from May 29 to June 4, reflects the falling Covid case counts statewide and the lower number of new hospital admissions for the disease, according to the department.

The rating comes after the U.S. Centers for Disease Control and Prevention downgraded several Vermont counties to “low” community levels last Thursday. Only one county, Bennington, continues to report high levels in the CDC data.

Vermont is not alone in its improved outlook for the disease. Every state in New England has reported falling Covid cases in the past two weeks, as has New York state, according to the latest data from the New York Times.

New England was the first region in the nation to report rising Covid cases from the BA.2 subvariant, but it has now fallen below the Western region of the United States, particularly California and Hawaii, the Times reported.

There are some caveats to the data, among them that almost every state relies on PCR testing to track cases, while at-home antigen tests often aren’t reported to the government.

Experts have also raised concerns about the metrics behind the CDC’s level categories, saying that they may give a “misleading” portrait of people’s individual risk.

For low-level counties, the agency’s only recommendations are that people stay up to date on recommended vaccinations, including booster shots, and that people get tested if they have symptoms of Covid.

The Vermont health department does not provide any guidance that changes based on community levels of Covid. It states on its website that individuals can decide to take precautions like wearing a mask based on their levels of risk.

An average of 137 Covid cases per day have been reported in the past week, a 20% drop from the week before, according to the health department.

Covid case counts are reliant on PCR testing data in Vermont, which officials have noted provides only a partial measure of transmission. For the past week, about 9.5% of PCR tests have come back positive for the disease, a decline from 11.5% one week ago and over 15% at the height of the BA.2 surge in mid-May.

The state reported that 33 people are hospitalized in Vermont with the virus, including five in intensive care, and reported similar numbers for June 3 and June 6. That compares to 75 hospitalizations at the peak of the surge.

Three additional deaths have occurred since the department updated its data last week, bringing the total to 673. That includes 32 deaths in May and one death in June.

The number of Covid deaths is based on death certificates that list Covid as a cause or probable cause of death, according to the health department. Because of the time it takes to investigate deaths and prepare death certificates, deaths can sometimes be added retroactively, raising the total for previous weeks and months.

Wastewater testing locations in Essex Junction, Jay and Burlington all reported declining levels of the virus in sewage samples, according to the weekly report.

The health department also reports some data on the demographics of new cases. Every age group reported a decline in cases this week compared to the week before, with the exception of people over the age of 80.

However, the health department does not track whether fully vaccinated people are up-to-date on their vaccines, including any recommended booster doses.