The Perfect Enemy | Trying to Stop Long COVID Before It Even Starts - The Atlantic
Skip to content
January 29, 2023
Read Time:9 Minute 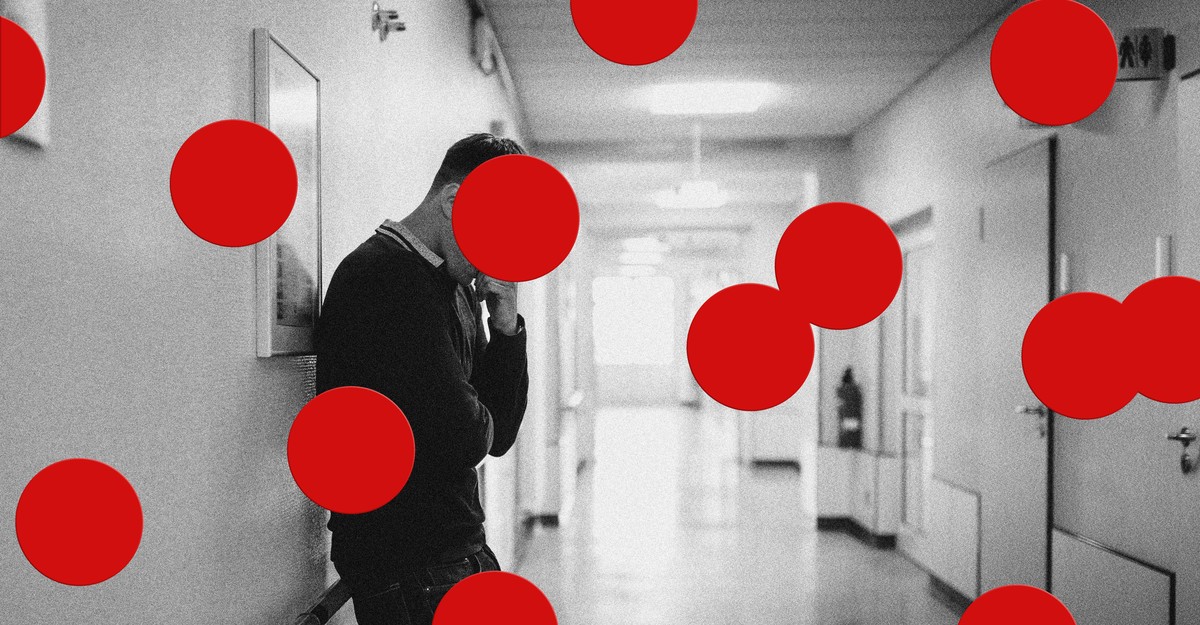 Three years into the global fight against SARS-CoV-2, the arsenal to combat long COVID remains depressingly bare. Being vaccinated seems to reduce people’s chances of developing the condition, but the only surefire option for avoiding long COVID is to avoid catching the coronavirus at all—a proposition that feels ever more improbable. For anyone who is newly infected, “we don’t have any interventions that are known to work,” says Akiko Iwasaki, an immunologist and long-COVID researcher at Yale.

Some researchers are hopeful that the forecast might shift soon. A pair of recent preprint studies, both now under review for publication in scientific journals, hint that two long-COVID-preventing pills might already be on our pharmacy shelves: the antiviral Paxlovid and metformin, an affordable drug commonly used for treating type 2 diabetes. When taken early in infection, each seems to at least modestly trim the chance of developing long COVID—by 42 percent, in the case of metformin. Neither set of results is a slam dunk. The Paxlovid findings did not come out of a clinical trial, and were focused on patients at high risk of developing severe, acute COVID; the metformin data did come out of a clinical trial, but the study was small. When I called more than half a dozen infectious-disease experts to discuss them, all used hopeful, but guarded, language: The results are “promising,” “intriguing”; they “warrant further investigation.”

At this point, though, any advance at all feels momentous. Long COVID remains the pandemic’s biggest unknown: Researchers still can’t even agree on its prevalence or the features that define it. What is clear is that millions of people in the United States alone, and countless more worldwide, have experienced some form of it, and more are expected to join them. “We’ve already seen early data, and we’ll continue to see data, that that will emphasize the impact that long COVID has on our society, on quality of life, on productivity, on our health system and medical expenditures,” says Susanna Naggie, an infectious-disease physician and COVID-drug researcher at Duke University. “This needs to be a high priority,” she told me. Researchers have to trim long COVID incidence as much as possible, as soon as possible, with whatever safe, effective options they can.

By now, news of the inertia around preventive long-COVID therapies may not come as much of a shock. Interventions that stop disease from developing are, on the whole, a neglected group; big, blinded, placebo-controlled clinical trials—the industry gold standard—usually look to investigate potential treatments, rather than drugs that might keep future illness at bay. It’s a bias that makes research easier and faster; it’s a core part of the American medical culture’s reactive approach to health.

For long COVID, the terrain is even rougher. Researchers are best able to address prevention when they understand a disease’s triggers, the source of its symptoms, and who’s most at risk. That intel provides a road map, pointing them toward specific bodily systems and interventions. The potential causes of COVID, though, remain murky, says Adrian Hernandez, a cardiologist and clinical researcher at Duke. Years of research have shown that the condition is quite likely to comprise a cluster of diverse syndromes with different triggers and prognoses, more like a category (e.g., “cancer”) than a singular disease. If that’s the case, then a single preventive treatment shouldn’t be expected to cut its rates for everyone. Without a universal way to define and diagnose the condition, researchers can’t easily design trials, either. Endpoints such as hospitalization and death tend to be binary and countable. Long COVID operates in shades of gray.

Still, some scientists might be making headway with vetted antiviral drugs, already known to slash the risk of developing severe COVID-19. A subset of long-COVID cases could be caused by bits of virus that linger in the body, prompting the immune system to wage an extended war; a drug that clears the microbe more quickly might lower the chances that any part of the invader sticks around. Paxlovid, which interferes with SARS-CoV-2’s ability to copy itself inside of our cells, fits that bill. “The idea here is really nipping it in the bud,” says Ziyad Al-Aly, a clinical epidemiologist and long-COVID researcher at Washington University in St. Louis, who led the recent Paxlovid work.

Paxlovid has yet to hit the scientific jackpot: proof from a big clinical trial that shows it can prevent long COVID in newly infected people. But Al-Aly’s study, which pored over the electronic medical records of more than 56,000 high-risk patients, offers some early optimism. People who took the pills, he and his colleagues found, were 26 percent less likely to report lingering symptoms three months after their symptoms began than those who didn’t.

The pills’ main benefit remains the prevention of severe, acute disease. (In the recent study, Paxlovid-takers were also 30 percent less likely to be hospitalized and 48 percent less likely to die.) Al-Aly expects that the drug’s effectiveness at preventing long COVID—if it’s confirmed in other populations—will be “modest, not huge.” Though the two functions could yet be linked: Some long-COVID cases may result from severe infections that damage tissues so badly that the body struggles to recover. And should Paxlovid’s potential pan out, it could help build the case for testing other SARS-CoV-2 antivirals. Al-Aly and his colleagues are currently working on a similar study into molnupiravir. “The early results are encouraging,” he told me, though “not as robust as Paxlovid.” (Another study, run by other researchers, that followed hospitalized COVID patients found those who took remdesivir were less likely to get long COVID, but a later randomized clinical trial didn’t bear that out.)

A clinical trial testing Paxlovid’s preventive potency against long COVID is still needed. Kit Longley, a spokesperson for Pfizer, told me in an email that the company doesn’t currently have one planned, though it is “continuing to monitor data from our clinical studies and real-world evidence.” (The company is collaborating with a research group at Stanford to study Paxlovid in new clinical contexts, but they’re looking at whether the pills might treat long COVID that’s already developed. The RECOVER trial, a large NIH-funded study on long COVID, is also focusing its current studies on treatment.) But given the meager uptake rates for Paxlovid even among those in high-risk groups, Al-Aly thinks his new data could already serve a useful purpose: providing people with extra motivation to take the drug.

The case for adding metformin to the anti-COVID tool kit might be a bit muddier. The drug isn’t the most intuitive medication to deploy against a respiratory virus, and despite its widespread use among diabetics, its exact effects on the body remain nebulous, says Stacey Schultz-Cherry, a virologist at St. Jude Children’s Research Hospital. But there are many reasons to believe it might be useful. Some research has shown that metformin can mess with the manufacture of viral proteins inside of human cells, Bramante told me, which may impede the ability of SARS-CoV-2 and other pathogens to reproduce. The drug also appears to rev up the disease-dueling powers of certain immune cells, and to stave off inflammation. Studies have shown that metformin can improve responses to certain vaccinations in humans and rodents, and researchers have found that people taking the drug seem less likely to get seriously sick from influenza. Even the diabetes-coronavirus connection may not be so tenuous: Metabolic disease is a risk factor for severe COVID; infection itself can put blood-sugar levels on the fritz. It’s certainly plausible that having a metabolically altered body, Schultz-Cherry told me, could make infections worse.

But the evidence that metformin helps prevent long COVID remains sparse. Carolyn Bramante, the scientist who led the metformin study, told me that when her team first set out in 2020 to investigate the drug’s effects on SARS-CoV-2 infections in a randomized, clinical trial, long COVID wasn’t really on their radar. Like many others in their field, they were hoping to repurpose established medicines to keep infected people out of the hospital; early studies of metformin—as well as the two other drugs in their trial, the antidepressant fluvoxamine and the antiparasitic ivermectin—hinted that they’d work. Ironically, two years later, their story flipped around. A large analysis, published last summer, showed that none of the three drugs were stellar at preventing severe COVID in the short term—a disappointing result (though Bramante contends that their data still indicate that metformin does some good). Then, when Bramante and her colleagues examined their data again, they found that study participants that had taken metformin for two weeks around the start of their illness were 42 percent less likely to have a long-COVID diagnosis from their doctor nearly a year down the road. David Boulware, an infectious-disease physician who helped lead the work, considers that degree of reduction pretty decent: “Is it 100 percent? No,” he told me. “But it’s better than zero.”

Metformin may well prove to prevent long COVID but not acute, severe COVID (or vice versa). Plenty of people who never spend time in the hospital can still end up developing chronic symptoms. And Iwasaki points out that the demographics of long-haulers and people who get severe COVID don’t really overlap; the latter skew older and male. In the future, early-infection regimens may be multipronged: antivirals, partnered with metabolic drugs, in the hopes of keeping symptoms both mild and short-lived.

But researchers are still a long way off from delivering that reality. It’s not yet clear, for instance, whether the drugs work additively when combined, Boulware told me. Nor is it a given that they’ll work across different demographics—age, vaccination status, risk factors, and more. Bramante and Boulware’s study cast a decently wide net: Although everyone enrolled in the trial was overweight or obese, many were young and healthy; a few were even pregnant. The study was not enormous, though—about 1,000 people. It also relied on patients’ individual doctors to deliver long-COVID diagnoses, likely leading to some inconsistencies, so other studies that follow up in the future could find different results. For now, this isn’t enough to “mean we should run out and use metformin,” Schultz-Cherry, who has been battling long COVID herself, told me.

Other medications could still fill the long-COVID gaps. Hernandez, the Duke cardiologist, is hopeful that one of his ongoing clinical trials, ACTIV-6, might provide answers soon. He and his team are testing whether any of several drugs—including ivermectin, fluvoxamine, the steroid fluticasone, and, as a new addition, the anti-inflammatory montelukast—might cut down on severe, short-term COVID. But Hernandez and his colleagues, Naggie among them, appended a check-in at the 90-day mark, when they’ll be asking their patients whether they’re experiencing a dozen or so symptoms that could hint at a chronic syndrome.

That check-in questionnaire won’t capture the full list of long-COVID symptoms, now more than 200 strong. Still, the three-month benchmark could give them a sense of where to keep looking, and for how long. Hernandez, Naggie, and their colleagues are considering whether to extend their follow-up period to six months, maybe farther. The need for long-COVID prevention, after all, will only grow as the total infection count does. “We’re not going to get rid of long COVID anytime soon,” Iwasaki told me. “The more we can prevent onset, the better off we are.”