The Perfect Enemy | Thrombosis and thrombocytopenia after vaccination against and infection with SARS-CoV-2 in Catalonia, Spain
Skip to content
December 1, 2022
Read Time:7 Minute 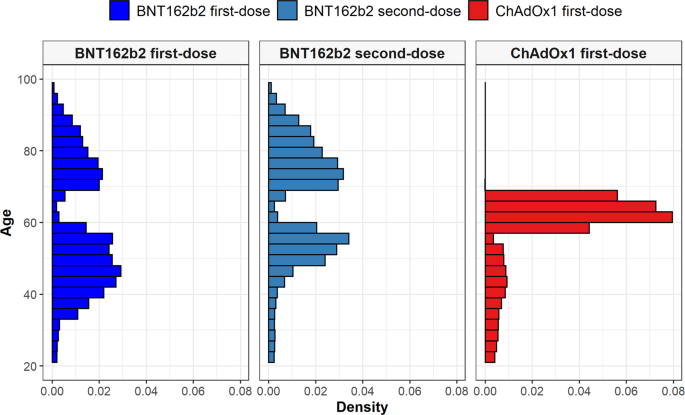 In this study including 2,613,774 people vaccinated against SARS-CoV-2 in Catalonia, Spain, risks of thrombosis and thrombosis with thrombocytopenia after vaccination against COVID-19 were generally similar to background risks for the general population. We observed a potential safety signal for pulmonary embolism after a first dose of BNT162b2, with 31 more events than expected among 2 million vaccine recipients (SIR: 1.25 [1.07–1.46]). In addition, more cases of thrombocytopenia were seen than were expected following both first and second doses of BNT162b2 and first-dose of ChAdOx1. Rates of pulmonary embolism with concomitant thrombocytopenia were also increased among first-dose BNT162b recipients. In comparison, rates of VTE, ATE, and thrombocytopenia among COVID-19 cases were far higher than background rates. For instance, risks of VTE, ATE, and thrombocytopenia were 10-, 4- and 5-fold higher for COVID-19 cases. It is worth noting that differences exist in the socio-demographics and clinical characteristics of recipients of both vaccines compared to each other and compared to the general population. Confounding by indication may therefore, at least in part, explain the observed safety signals.

To date, population-based studies reporting thromboembolic events among SARS-CoV-2 vaccine recipients are scarce. A cohort study from Denmark and Norway which included 281,264 people aged between 18 and 65 years vaccinated with ChAdOx1 reported a 2-fold increase in VTE (SIR: 1.97 [1.50–2.54]) and a 3-fold increase in thrombocytopenia (SIR: 3.02 [1.76–4.83]) within 28 days of vaccination11. VTE rates were largely driven by cerebral venous sinus thrombosis (CVST) events, and were higher among younger age groups (18-44 years SIR: 2.99 [1.94–4.42]). Further, in line with our results, Pottegård et al. did not observe increased rates of ATE. Differences between ours and Pottegård’s results might be partially explained by the characteristics of ChAdOx1 vaccine recipients, who were mostly aged 60–69 years in our study.

In a nested case-control study including hospital data from Scotland, increased rates of idiopathic thrombocytopenic purpura (ITP), ATE and haemorrhagic events were observed among 1.7 million people with a first-dose of ChAdOx112. These findings were subsequently confirmed for ITP in a post hoc self-controlled case series (SCCS) analysis, but not for ATE or haemorrhagic events. In contrast to our results, the authors did not find increased rates of VTE among 821,052 people vaccinated with a first-dose of BNT162b2. Discrepancies between their and our results could be related to the study design, as well as to different sample sizes. As recently raised by Schuemie et al., case-control studies are prone to substantial bias when using retrospective databases and therefore must be interpreted with caution14. Further, our study included a larger cohort of BNT162b recipients but fewer and older ChAdOx1 vaccinees.

In a cohort study conducted by our group using primary care data from the UK, we also found increased risks of pulmonary embolism (SIR: 1.21 [1.07–1.36]) among 1.6 million BNT162b first-dose recipients16. Risks of pulmonary embolism were also seen to be increased among 1.8 million ChAdOx1 recipients. Rates of thrombocytopenia were also higher than expected for ChAdOx1, with similar SIR to those in Catalonia (SIR 1.25 [1.19–1.31]), but not for BNT162b recipients. However, rates of immune thrombocytopenia were higher than expected for both vaccines, with SIRs of 2.01 [1.27–3.19] for ChAdOx1 and 1.74 [1.05–2.89] for BNT162b2. Likewise, the differences between the two studies might be related to differences in study populations, with the UK study including younger and three-times as many ChAdOx1 recipients, but fewer BNT162b vaccinees. Differences could also be related to lack of hospital data in the UK study.

The mechanisms underlying a potential association between SARS-CoV-2 vaccines and thromboembolic events are currently under investigation. Shortly after the first signal alerts for the ChAdOx1 vaccine, case reports were published describing a potentially new immune disorder named vaccine-induced immune thrombotic thrombocytopenia (VITT) among ChadOx1 recipients17,18. According to the author’s descriptions, this disorder manifests with atypical thrombotic events (e.g. CVST, SVT) associated with thrombocytopenia 5 to 15 days following vaccination and could be mediated by platelet-activating autoantibodies against platelet factor 4 (PF4). Regarding SARS-CoV-2 mRNA vaccines, some authors have suggested that the inflammatory response following vaccination might increase macrophage-mediated clearance and/or diminish platelet production, thus leading to thrombocytopenia13. Such mechanisms have been previously postulated in relation to ITP following viral infections (including SARS-CoV-2)19, as well as following vaccination against other virus (e.g., varicella-zoster, measles-mumps-rubella)20,21. We did find increased risks of pulmonary embolism with thrombocytopenia among BNT162b2 recipients and increased rates of thrombocytopenia among BNT162b2 and ChadOx1 recipients. However, risks of thrombocytopenia and TTS were far higher among COVID-19 cases. Further research is needed to confirm our observations in other large population-based cohorts and to establish its pathogenesis.

The main strength of our study is its large sample size and representativeness, which allowed us to assess the incidence of rare adverse events in a real-world setting. In addition, to our knowledge, this is the largest study to-date reporting thromboembolic events following BNT162b2 second-dose. Our study was underpinned by a well-established primary care database that has previously been used for various post-authorisation safety studies22,23, linked to hospital diagnoses, and was designed in collaboration with the study funder, the EMA. Finally, for the sake of transparency and reproducibility, we have made our protocol, analytical code and full result set publicly available.

However, our study also has several limitations. First, vaccinated cohorts differed substantially from the general population and from one another. Our data mirrored the different, and changing, nationwide guidelines for the provision of BNT162b2 and ChAdOx1 in Spain. Although the distribution of comorbidities and medication was broadly similar across cohorts when stratifying by age categories, vaccine recipients were generally in slightly worse health than the general population. Therefore, even though we calculated SIRs to allow comparisons between cohorts, we cannot exclude that residual confounding by indication might have influenced our results. In addition, the majority of ChAdOx1 vaccine recipients were older than 60 years in our study, with prior evidence suggesting a stronger association between this vaccine and VTE among individuals younger than 50 years11,15. This could have prevented us from observing an association between ChAdOx1 and VTE. Secondly, thromboembolic events were identified using routinely collected data, and therefore the lack of formal adjudication of outcomes might have introduced measurement error. Events might also be underestimated in all cohorts, especially rare events with complex diagnoses, such as immune thrombocytopenia or CVST, which we were unable to identify. Although underestimation of events was likely non-differential across cohorts for events before March 2021, we cannot exclude that detection bias following the EMA’s signal alert report might have led to differential measurement error between the vaccinated and comparator cohorts from March onwards. However, our results were consistent in analysis stratified by time period for the first-dose BNT162b2 and ChadOx1 cohorts. Thirdly, individuals with a thromboembolic event after a first-dose were by design excluded from an analysis of the same event after a second-dose and this exclusion could be considered as leading to depletion of susceptibles for the second-dose cohort.

In summary, in this study of over two million people vaccinated against SARS-CoV-2 in Catalonia, Spain, the BNT162b2 and ChAdOx1 vaccines have been seen to have similar safety profiles. Safety signals for pulmonary embolism following BNT162b vaccination, as well as for thrombocytopenia following BNT162b2 and ChAdOx1 vaccination have been identified. Our results must be interpreted with caution considering the risk of residual confounding by indication. Regardless of the vaccine used, the increase in rates of thrombosis among persons with COVID-19 is far higher than any potential safety signal seen among persons vaccinated.