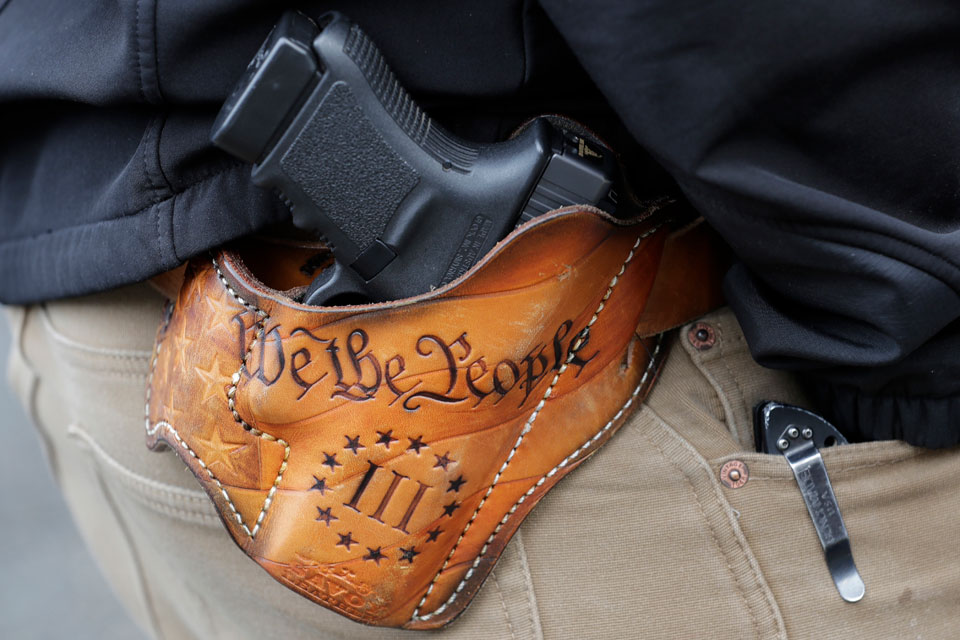 An attendee at a gun rally carries his gun in a holster that reads ‘We the People’ from the Preamble to the Constitution, Jan. 18, 2019, at the Capitol in Olympia, Wash. The United States’ founding document, with its focus on property rights and private interests, is bad for public health. | Ted S. Warren / AP

Public health is about curative, rehabilitative, and especially preventative healthcare for everybody, no exclusions. Failed public health was on display during the coronavirus pandemic. “The United States has the highest rate of COVID-19 deaths per capita” among 11 high-income countries, according to one infectious disease specialist.

Similarly, local authorities allowed dangerous levels of lead to persist in the drinking water of Flint, Mich., and other cities. Lead damages the brain of young children and recently was shown to have contributed to lowered IQs in 170 million Americans who are now adults.

The constitutions of only a few governments speak of people’s right to health or healthcare. Without offering specifics, the U.S. Constitution mentions a duty to “promote the general welfare.” The Constitution provides for political freedoms, but concentrates on devices aimed at diffusing political power. Examples are checks and balances, federalism, and separation of powers.

Its framers were fearful of political factions and their jostling for political power. In Federalist No. 10 (1787), James Madison explains: “A landed interest, a manufacturing interest, a mercantile interest, a moneyed interest, with many lesser interests, grow up of necessity in civilized nations, and divide … into different classes, actuated by different sentiments and views. The regulation of these various and interfering interests forms the principal task of modern legislation.”

The “common and durable source of factions has been the various and unequal distribution of property,” he adds. “Those who hold and those who are without property have ever formed distinct interests in society.”

Delegates to the Constitutional Convention (1787) sought to protect wealth and private property; they made suitable arrangements for governing. Public health was not on their agenda, not least because the scientific basis for preventing sickness, injuries, and deaths did not yet exist. Subsequently the U.S. government’s commitment to “promote the general welfare” remained weak. A tradition of healthcare as private enterprise has contributed to smothering public health.

Widespread disregard for public health and for teaching about prevention has contributed to sectors of the people embracing irregular views. Anti-vaccine bias is one of them.

Similarly, agitators dealing with gunfire killings put forth skewed notions of constitutional law. By any rational standards, the killings represent a public health problem, just as do injuries and deaths from accidents, automobile accidents included.

In the same vein, abortion opponents obsess about prevention in the name of preserving life. Their position would be commendable from the public-health point of view, if their passion did not disappear once a baby was born.

A general weakening of child-health advocacy and ultimately of preventative programs exemplifies the current plight of public health endeavors in the United States. Serving to illustrate is the high U.S. incidence of preventable childhood deaths.

In comparison with young people in 16 other high-income countries, younger Americans experience the “highest age-specific mortality rates for every age group under age 25,” according to the Population Reference Bureau (PRB). Infant mortality in the United States ranks as the highest by far among 11 high-income nations; The U.S. infant mortality rate is greater than that of 49 other countries.

That’s important, because the more U.S. parents are afflicted by poverty, the more likely their babies will die. The National Center for Biological Information notes that, “Higher infant mortality among low socioeconomic groups has been recognized as a societal problem in the US for 140 years.”

Epidemiologists cite the association of prematurity with infant death and the role of poverty in contributing to premature birth. But, according to one analyst, poverty also impinges upon full-term babies. These babies born to low-income parents die at a rate 1.4 to 1.8 times higher than do the babies of higher income families.

Babies are more likely to survive if their caretakers have material resources. The fact of governments or societies being well-resourced does not matter. That’s evident in a study showing that the U.S. “gross domestic product health expenditure,” which is the highest among 14 Western nations, exerted no effect on reducing childhood deaths. However, the U.S. income-inequality gap, greater than that of any of those 14 nations, was “highly significant.”

Similarly, the United States registers the highest gross national income per capita among the 38 member-nations of the Organization for Economic Co-operation and Development. Even so, the U.S. infant mortality rate exceeds that of all but three of those states.

The United States has a money-distribution problem. Not enough ends up where it might “promote the general welfare.” Where does the money go?

Oxfam reports that, “global food giant” Cargill company, based in Minnetonka, Minn., and owned, for the most part, by the world’s 11th richest family, has provided members of that family with $42.9 billion, up $14.4 billion since 2020; that the Walton family, owning half of Walmart’s shares, has gained $238 billion—up $8.8 billion since 2020; that Moderna company converted $10 billion in government funding for a COVID-19 vaccine into $12 billion in profits; that vaccine manufacturer Pfizer company last year paid $8.7 billion in shareholder dividends.

Wealth of the world’s billionaires grew “more in the first 24 months of COVID-19 than in 23 years combined.” Their total wealth is “equivalent to 13.9 percent of global GDP.”

The Constitution’s authors were in the dark when they were trying to discipline ruling-class factions. They could not know that European and North American capitalists would be plundering a new industrial and colonial world to accumulate wealth and enlist governments in their service.

U.S. governments would take on an increasingly prominent role in that project. To distribute wealth for the common good was not in the cards.

For one thing, the Constitution imposed rules aimed at blocking full democracy. These include two-thirds majority requirements, indirect elections of presidents (and, for a while, senators), the disproportionate electoral power of small states, voting limitations, and a powerful judicial branch. The framers of course made accommodations for slavery.

Some framers bemoaned the “danger of the leveling spirit” or saw an “excess of democracy.” For delegate Rufus King, “the unnatural Genius of Equality [was] the arch Enemy of the moral world.”

Architects of the Constitution used the ploy of divide and rule to control entities of their new government. They could not know how, later on, defenders of capitalism would use that tool to great effect while seeking to break apart the unity of people in resistance. Those in charge now create divisions through tension over guns, abortion, and equality for African-descended people.

Such is the setting for our fight for children’s lives, for universal healthcare, and more. The time is right for unity, yes, and for radical solutions.

As with all op-eds published by People’s World, this article reflects the opinions of its author.