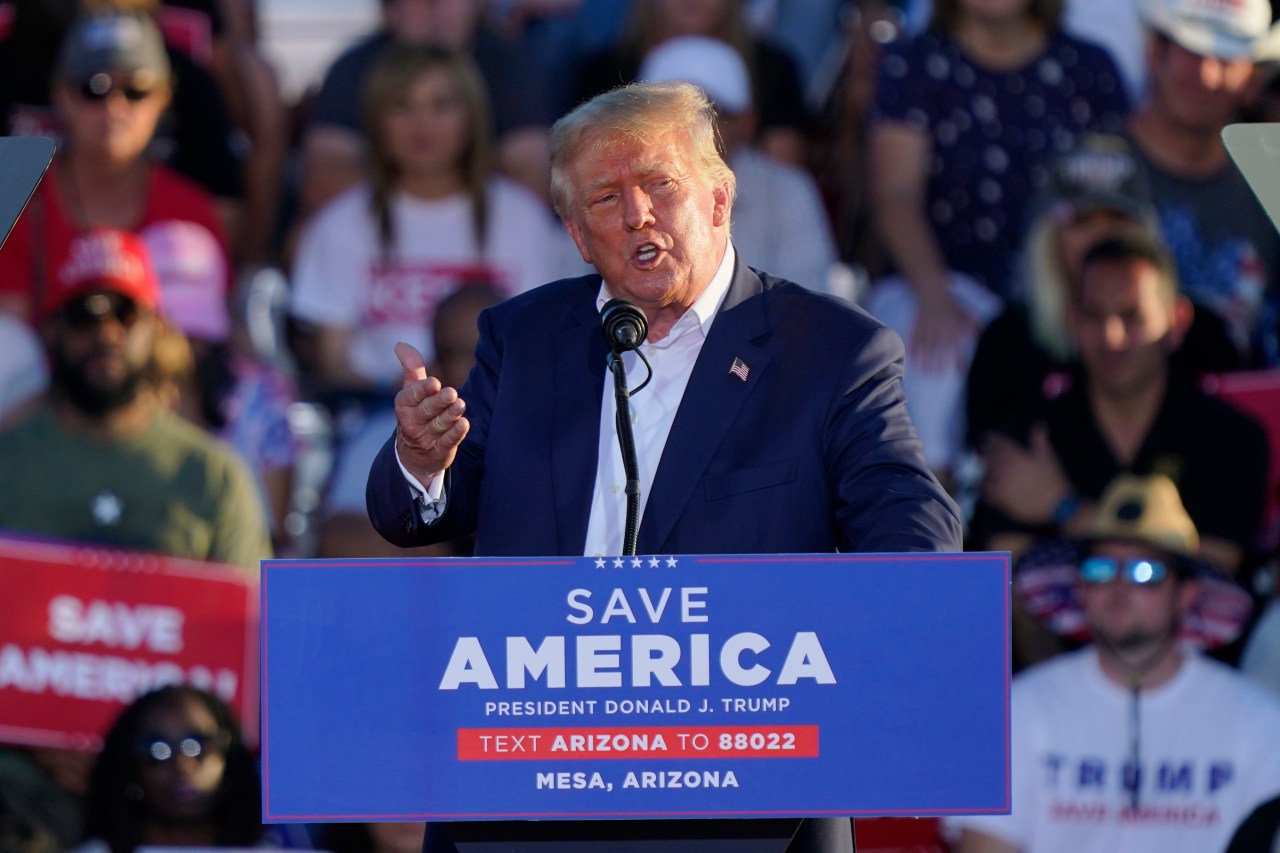 Thank you for signing up!

Former President Trump has sent his clearest signal yet that he may announce his 2024 presidential run soon after the midterms.

How soon are we talking?: Axios’s Jonathan Swan reports that Trump’s team is eyeing Nov. 14 for the potential announcement. I.e.: Six days after the midterms.

Personal tidbit: The Hill’s Brett Samuels points out that Trump’s daughter Tiffany is scheduled to get married at the Mar-a-Lago estate on Nov. 12.

And in case you didn’t already have 2024 on the mind: One prominent political scientist who has called presidential winners since 1984 tells The Hill’s NotedDC newsletter that the White House is President Biden’s to lose.

It’s Friday! This is your last weekend of your TVs being inundated with campaign ads for a while. So, enjoy! I’m Cate Martel with a quick recap of the morning and what’s coming up. Did someone forward this newsletter to you? Sign up here.

What happened?: “An email went out to the company’s employees late Thursday notifying employees of plans to cut jobs, informing them that by 9 a.m. Pacific time Friday, workers would receive an email with the subject line: ‘Your Role at Twitter.’ Those keeping their jobs would be notified on their company email. Those losing them would be told via their personal email.”

No one is safe, apparently: “Even workers who Musk had pulled into small teams to accelerate the development of new products over the past six days were let go, based on their access to internal systems being revoked. Another employee who spoke under the same condition said they knew of four people who had been pulled into such a team who lost their jobs on Thursday. The employee lost theirs too.”

SMALL ANECDOTE — HOW SOME EMPLOYEES ARE TAKING THE NEWS:

NBC News’s Ben Collins tweeted: “Talking to a couple of Twitter employees just now who learned they don’t work there anymore when their email stopped working. I have never talked to people more excited to get laid off in my entire life.”

Rolling Stone’s Nikki McCann Ramírez pointed out: “just so were all clear, Musk is firing half of Twitter’s staff, including huge swaths of their content moderation capability, four days before opening up identity-confirmation-free verification to the whole website which will happen…the day before a national election.”

What economists had predicted: A gain of roughly 190,000 jobs added last month

Keep in mind: These are the final job numbers before the midterms.

🗳 On the campaign trail

The nonpartisan Cook Political Report shifted its forecast for Senate control this morning toward the GOP.

From Jessica Taylor, the Senate and governors editor for the Cook Political Report: “Taylor noted that Democrats could still see a scenario where they maintain their narrow majority at 50-50 in the Senate, but she said that they believed it’s possible Republicans could pick up as many as three seats on election night.”

CNN’s Jake Tapper tweeted, “Just asked a Democratic pollster what he’s seeing out there and this is what he sent back.” Screenshot

^ Speaking of Jake Tapper: He will no longer host his prime-time television show after the midterm elections. He will return to hosting “The Lead” at 4 p.m.

“Centrist Sen. Joe Manchin (D-W.Va.) on Thursday called for a broad bipartisan deal to protect the solvency of Social Security, Medicare and Medicaid, popular programs that face serious funding issues over the next few decades.”

Manchin told Fortune’s Alan Murray at a CEO conference: “You’re going to get your financial house in order. We cannot live with this crippling debt.”

The federal government is expected to shift costs for COVID-19 vaccines, tests and treatments onto the American public in the coming months.

The problem: “Experts say most Americans are not aware that this will happen and will be in for a major case of sticker shock. They warn without additional protections or funding, the transition to commercialized treatments and preventive services will lead to health barriers.”

What to expect: “Instead of free access to tests and treatments like Paxlovid, insurance companies and manufacturers will set the price. The days of free, easily accessible COVID-19 tests will also likely end. Private insurance may not cover over-the-counter tests anymore, and patients may need a prescription first for a PCR test.”

What about vaccines?: “Vaccines will still be free to people with private insurance, though the cost will likely be reflected in premiums. Even with insurance, patients will likely see costs if they go to an out-of-network provider.”

^ But that leaves out uninsured or underinsured Americans.

Why is this happening?: The end of the U.S. government’s public health emergency is a big reason. The Biden administration extended it for another 90 days in October, but that will probably be the last extension. Biden has been urging Congress to appropriate money to continue funding vaccines and treatments, but that doesn’t seem to be going anywhere.

This is an adorable mug:

I love the show, but I just … don’t understand the appeal:

NBC’s “Today” tweeted, “You can book a one-night stay at a replica set of ‘The Office’ for just $20.05.  Reservations open November 16.” Photos and details

The House and Senate are out. President Biden is in San Diego and Chicago. On Friday. Vice President Harris is in Washington, D.C.

If you’re hoping to get Taylor Swift tickets:

And to remind you that it’s not all fun and games being a puppy, here’s a tough day for a dog-in-training.

Pandemic Year 3: Who’s Got the Power?