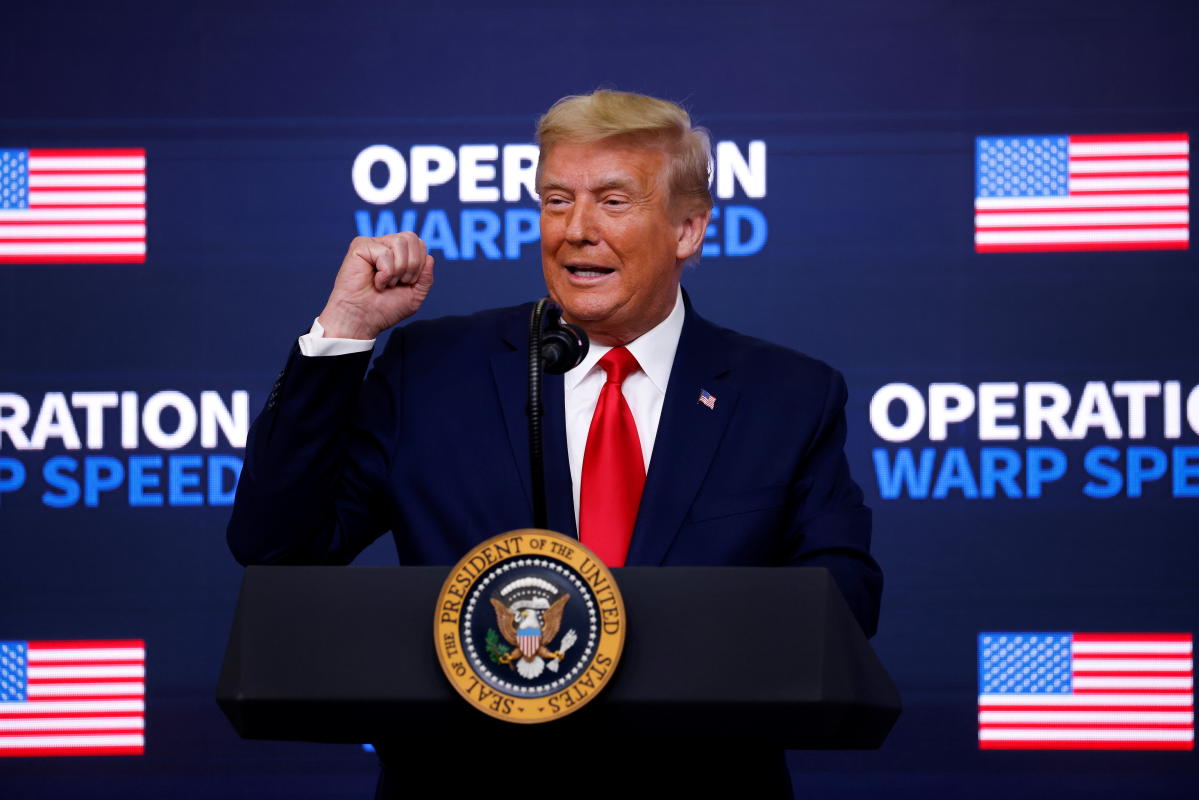 Operation Warp Speed, the Trump-era program that poured billions of dollars into developing COVID shots, seemed to signal a new dawn of American vaccine making, demonstrating how decades of scientific grunt work could be turned into lifesaving medicine in a matter of months.

But as a third pandemic winter begins in the United States, its vaccine-making effort has lost steam. Efforts to test and produce next-generation COVID vaccines are bogged down by bureaucratic problems and funding shortfalls. Foreign rivals have raced ahead in approving long-awaited nasal-spray vaccines, including one invented in St. Louis, creating a scenario in which Americans would have to travel abroad for the latest in American vaccine technology.

The Biden administration has launched an 11th-hour effort to restore the country’s edge. In a bid to resurrect Operation Warp Speed, President Joe Biden asked the lame-duck session of Congress this week for $5 billion for next-generation vaccines and therapeutics, as part of a broader $9.25 billion pandemic spending request. But Republicans, having blocked COVID spending packages since the spring amid complaints about how the White House spent earlier allocations, have shown no signs of dropping their resistance.

Sign up for The Morning newsletter from the New York Times

As a result, even with the pandemic still taking a heavy toll, prospects have dimmed for the two most coveted kinds of next-generation vaccines: nasal sprays that can block more infections, and universal coronavirus shots that can defend against a wider array of ever-evolving variants.

In the coming months, scientists project that COVID could kill tens of thousands of Americans. The cost of infections keeps piling up, too: Long COVID sufferers are battling persistent health problems. And millions are missing work because they catch the virus, exacerbating labor shortages.

No next-generation vaccines are as close at hand, or as likely to reduce the spread of the virus, as those that can be inhaled or sprayed into the nose.

By generating immunity in people’s airways, where the coronavirus first lands, those vaccines can potentially help extinguish infections before they begin. Immunity delivered by a shot in the arm, on the other hand, takes longer to attack the invading virus, giving people good protection against serious disease but not to the infections that spread the virus and let it evolve.

China, India, Russia and Iran have all approved vaccines delivered through the nose or the mouth, even though they have not released much data about how the products work.

In the United States, nasal sprays have been held back by the same funding constraints and logistical hassles that, before the pandemic, often made developing vaccines a decadelong ordeal. The delay could not only weaken the country’s defenses against a more lethal coronavirus variant but also hurt preparations for a future pandemic, depriving the world of an oven-ready nasal vaccine platform that could be adapted to a new virus.

“It went back to the pre-pandemic speed of vaccine development,” said Florian Krammer, a virus expert at the Icahn School of Medicine at Mount Sinai. His team’s nasal vaccine has undergone its most advanced testing in Mexico; collaborating with a pharmaceutical company there offered the fastest path to clinical trial funding. In the United States, he said, “The funding situation is pretty dire.”

The problems are not only financial. The best next-generation vaccine studies often depend on using existing mRNA shots, such as the COVID vaccines made by Pfizer and Moderna. In some cases, that is because researchers want to compare nasal sprays to injectable vaccines. In others, it is because scientists need to know how well nasal vaccines boost immunity after an earlier mRNA shot.

But scientists aiming to develop nasal vaccines as boosters have discovered that they are barred from using leftover Pfizer or Moderna doses in their studies, despite tens of millions of unused doses having been thrown away.

Purchase agreements with the federal government prevent doses of the two vaccines from being used for research purposes without the companies’ approval, scientists said. Those types of provisions are generally intended to protect companies from the risks of a poorly run experiment hurting their product, although they can also help insulate firms from head-to-head studies that may flatter a competitor.

Because the government controls the supply of Pfizer and Moderna shots, nasal-vaccine makers cannot independently purchase them. Instead, scientists have had to pay outside manufacturers to make imitations.

Among the researchers in that position is Akiko Iwasaki, an immunologist at Yale University, whose experimental nasal vaccine is intended to boost immunity in those previously injected with mRNA shots. Her team’s vaccine appears to reduce viral transmission in hamsters, a promising sign. But Iwasaki has not been able to get Pfizer or Moderna shots for studies on monkeys, creating less reliable conditions for measuring how animals receiving mRNA shots respond to nasal boosters.

“There are so many millions of doses being thrown down the drain, and all we’re asking for is a couple of vials to be able to do some animal research,” Iwasaki said. “That’s kind of held us back.”

Scientists within the federal government have struggled to surmount the same legal barriers, despite extensive taxpayer support for mRNA vaccines. For much of the past year, federal officials negotiated with Moderna for permission to use its vaccine for research studies that were not expressly approved by Moderna or done in collaboration with the company, said Karin Bok, the acting deputy director of the Vaccine Research Center at the National Institute of Allergy and Infectious Diseases.

Only about a month ago did government scientists get those doses, Bok said. They are still unable to use Pfizer’s vaccine in the same way, she added.

“That’s a big gap that we need to think about how to overcome for the next pandemic,” Bok said. For now, she said, nasal vaccine makers and other researchers would probably be unable to secure licensed mRNA shots until doses become available on the private market next year.

Pfizer said in a statement that it was not providing its vaccine to independent research groups, but that it had worked with governments that wanted to resell or give away doses for clinical trials. Moderna said that it evaluated research requests on a case-by-case basis and collaborated with government scientists and several academic laboratories on studies of its vaccines.

There are no guarantees about how effective a nasal vaccine would be or how long its protections would last. It is not entirely clear how best to formulate the vaccines or deliver them to people’s airways. Safety concerns stem from the nasal cavity’s closeness to the brain and the lungs. And there is no standard test for measuring immune responses in the airways, as there is for gauging the systemic immunity that is the goal of injectable vaccines.

The only approved nasal vaccine in the United States is FluMist, for preventing influenza, and its use is restricted to younger and healthier people.

Last month, a nasal version of the Oxford-AstraZeneca vaccine failed in a trial, an outcome that investigators said could have resulted from too much of the spray being swallowed and broken down in the stomach.

“It’s a fundamentally more difficult venture than a shot in the arm, which we’ve been doing for over 100 years,” said Dr. Benjamin Goldman-Israelow of Yale, who is working with Iwasaki on the team’s nasal vaccine.

The chances of any one candidate failing have discouraged America’s largest vaccine makers from investing. While government funding protected pharmaceutical companies in 2020 from the risks of pouring money into tricky vaccine research, those assurances have evaporated.

Foreign vaccine makers have shown more interest, in part because nasal vaccines are expected to be easier than mRNA shots to store and use in poorer nations. Eventually, people may even be able to self-administer them at home.

Two years ago, India’s Bharat Biotech, a leading vaccine manufacturer, jumped on a promising early study of a nasal vaccine designed at Washington University in St. Louis and negotiated to make and test doses. India recently approved the vaccine based on data that Bharat has presented to American government scientists, but not released publicly.

The vaccine has progressed more slowly in the United States. Only last month did a smaller American company, Ocugen, secure the rights to it.

The team behind the vaccine “made multiple overtures to almost all of the major vaccine players and there wasn’t any buy-in,” said Dr. David T. Curiel, a researcher at Washington University in St. Louis who invented the vaccine with a colleague, Dr. Michael Diamond. Curiel said that the White House had long been calling for vaccine development funding. But, he said, “The Orwellian aspect has been trying to find specifically where those funds are.”

Government scientists have been pushing to speed up the process. Dr. Robert Seder, of the Vaccine Research Center, recently launched a study in nonhuman primates that will compare different nasal booster formulations to each other and to injectable boosters. It will also test spraying the new vaccines into the nose or having them inhaled through a mouthpiece.

One candidate is a modified version of Moderna’s shot. The company said it was collaborating with government scientists and studying how to deliver mRNA medicines to the lungs.

But federal health officials said that they, too, have seen funding requests languish, leaving much of the onus on academic researchers and their startup companies. Roughly half a dozen American groups are testing nasal vaccines in people.

“We don’t have the resources of a Pfizer or BioNTech,” said Dr. Bruce Turner, the CEO of Xanadu Bio, which he co-founded with Iwasaki at Yale. “We don’t have Operation Warp Speed.”

The leading American nasal vaccine candidates have been built on decades of government funding for the underlying research. What is missing, scientists said, is money for pushing those vaccines out of university laboratories and into real-world studies now that they are urgently needed.

“We’re at the last mile,” said Biao He, a professor at the University of Georgia. His company, CyanVac, based in Athens, Georgia, began an early-stage human study of a nasal vaccine 15 months ago that is only now nearing completion. The costs of speeding up testing, he said, paled in comparison to the risks of waiting.

“When so many people’s lives are at stake,” he said, “can’t we do something about it?”