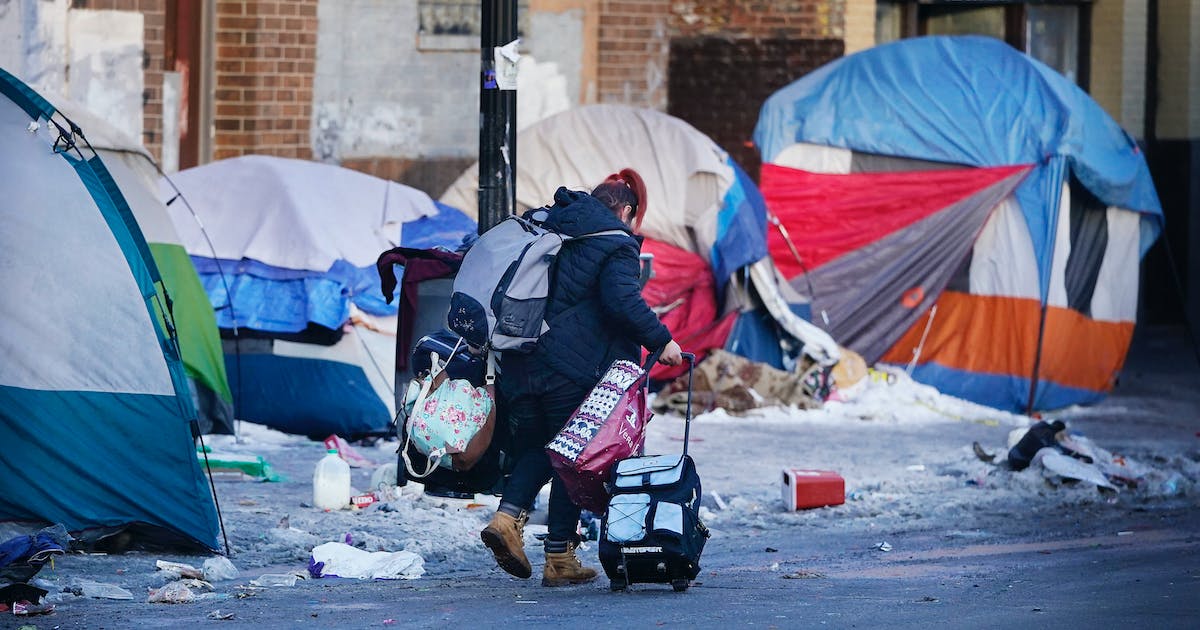 Freddy Toran has been on a mission to persuade people living on the streets to get vaccinated against COVID-19 ever since his 82-year-old father abruptly died from the virus two years ago.

It’s been a tough sell. Toran, 59, a longtime homeless advocate and volunteer at a Minneapolis shelter, said he sometimes has to pull out his smartphone and show a video of his father’s dying moments — when he was struggling to breathe in a nursing home — before a person experiencing homelessness will commit to the potentially lifesaving shots.

“It’s really hard to think about vaccines when you have no transportation and you’re too busy worrying about where you have to sleep that night,” said Toran, an organizer with Freedom from the Streets, a Twin Cities advocacy group led by homeless people. “But this [virus] is real — as real as it gets.”

His experience underscores the persistent challenge of getting vaccines to hard-to-reach populations.

An expansive new study found that rates of vaccination among Minnesotans who are homeless or in jail are drastically lower than in the general population, suggesting they are not getting equal access to the shots despite aggressive outreach. About 34% of homeless Minnesotans were fully vaccinated at the end of 2021, compared with 64% of other Minnesotans. The disparities worsened as booster shots were rolled out last year. Statewide, the general population has received a booster shot at four times the rate of homeless and jail populations, according to the study.

The findings, published last week in the journal Health Affairs, raise fresh questions about the state’s strategy for distributing shots, and suggest that more targeted approaches are necessary to reach marginalized groups. Early last year, Gov. Tim Walz’s administration opened community vaccination sites across the state and offered a host of incentives — including $100 gift cards and free state park passes — to encourage more Minnesotans to get the shots. Community health providers and volunteer physicians organized vaccination drives in churches, schools and even breweries.

Meanwhile, Hennepin County Health Care for the Homeless continues to offer vaccinations at shelter and outreach sites throughout Minneapolis, as well as at homeless encampments through its outreach teams.

Even with these efforts, vaccination rates lagged significantly for Minnesotans who are homeless or in jails — highly transient populations that face transportation and other barriers to getting to vaccination sites. The approximately 8,000 Minnesotans who sleep outside or in emergency shelters are considered particularly vulnerable to the virus because they have high rates of chronic health problems and spend so much time in public. The cramped conditions of many shelters, where people sleep on bunks just feet apart, can make it difficult to avoid airborne pathogens.

The slow pace of booster shots among these groups is particularly worrisome, say the study’s authors, because the extra vaccine doses have been found to be instrumental in preventing infections and keeping people out of the hospital. Minnesotans experiencing homelessness and incarceration took much longer to start getting booster shots than others. The booster uptake rate for these populations did not increase until last November — 11 weeks after the general population. By the end of 2021, fewer than 10% of people in these groups had received a booster shot, compared with 32% of the state’s overall population, the study found.

“This [study] shows we still have a ways to go in terms of moving the needle, especially for populations that are the most unstable,” said Dr. Katherine Diaz Vickery, a family medicine doctor and executive director of Hennepin County’s Health Care for the Homeless program, and one of the study’s primary authors. “People experiencing homelessness and people in jail need access to trusted health care providers who can offer them support, choices and time to decide what vaccines are best to protect them from the severe consequences of COVID-19.”

Minnesotans experiencing homelessness have suffered disproportionately from the pandemic, even as state and local outreach efforts have slowed the virus’ spread. About 18% of homeless Minnesotans who contracted the virus have been hospitalized, compared with 4.5% of the general population, according to data from the Minnesota Department of Health.

Brian Gooley, 58, has been bouncing from hotels to friends’ couches to the streets in the Twin Cities ever since he was evicted from his apartment 12 years ago. Even after the vaccines became widely available, Gooley avoided health clinics and community vaccination sites because he was afraid of contracting the virus, he said. He knew shots were available in the large downtown homeless shelters, but was fearful of venturing there because of the wave of street violence.

“Not being in an individual space is terrifying to me with this virus still going around,” said Gooley, who eventually got vaccinated at a Walgreens.

The study’s authors — including researchers at the University of Minnesota, Hennepin Healthcare and several of the state’s largest private health systems — stopped short of making policy recommendations. Broadly speaking, they said the data “highlight the urgency of targeted outreach” to populations in congregate settings, particularly amid the spread of new COVID-19 variants. They suggest that new approaches, such as offering vaccines to the newly jailed, may be necessary to overcome barriers to access.

Toran, who was homeless for 11 years, said the state should create a team of “vaccine ambassadors,” who would go inside shelters and drop-in centers to educate people about benefits of the shots. Ideally, he said, these ambassadors would already work with the homeless and have relationships with them. It may take three or four conversations — and a financial incentive — to persuade a hesitant person to get the jabs, he said.

“It’s all about building trust,” Toran said, “because there’s still too much misinformation going around.”