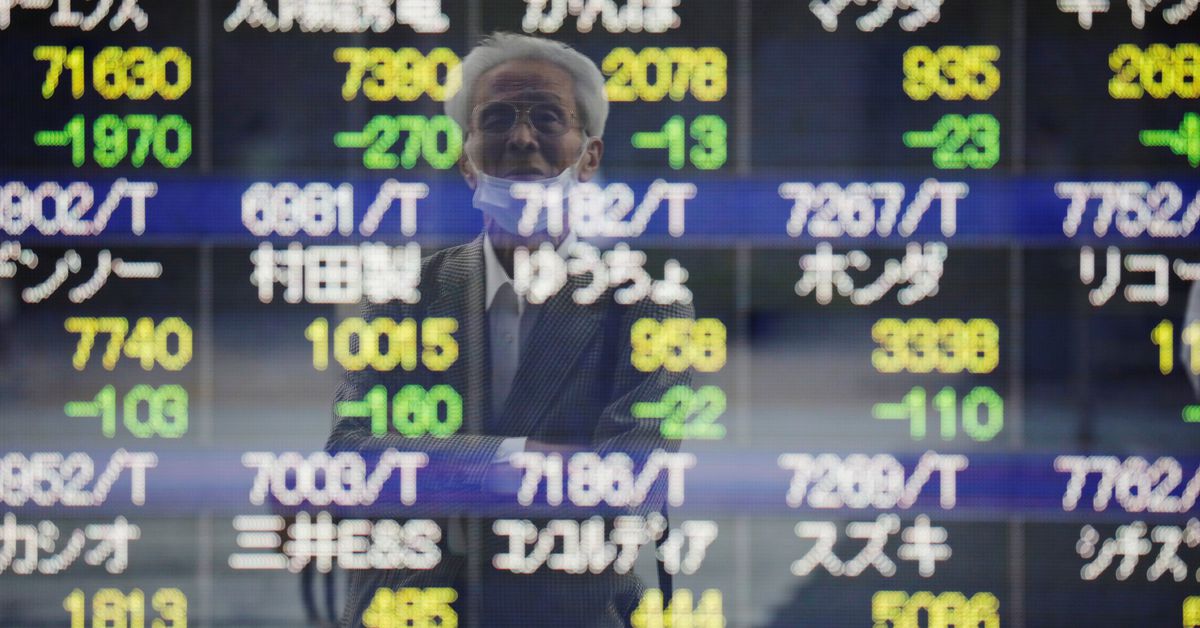 A man wearing a protective mask, amid the COVID-19 outbreak, is reflected on an electronic board displaying stock prices outside a brokerage in Tokyo, Japan, September 21, 2021. REUTERS/Kim Kyung-Hoon

HONG KONG, June 21 (Reuters) – Stocks rose and the safe-haven dollar edged down on Tuesday as investors paused for breath after a steep selloff, but concerns remain about aggressive central bank interest rate hikes and risks of a global recession.

MSCI’s broadest index of Asia-Pacific shares outside Japan (.MIAPJ0000PUS) rose 1.3%, edging up from a more than five-week low hit and set for its best day in around two weeks. Japan’s benchmark Nikkei average (.N225) gained 2.22%.

Gains were broadbased, but Chinese tech names were among the leaders with Hong Kong-listed firms (.HSTECH) up 1.9%.

European shares were also set to extend the previous day’s gains with EUROSTOXX 50 futures up 0.6% and FTSE futures gaining 0.5%.

Nonetheless, some investors see the current bounce as short-lived.

“I think the green that we’re seeing this morning is not necessarily a function that people are moving back in towards risk assets,” said Kerry Craig, global market strategist at JPMorgan Asset Management.

“It’s just the normal behavior on the very large selloff to get some reprieve and breathing space come through because fundamentally, nothing has changed on the macro front last week.”

Central banks around the world are looking to raise interest rates aggressively to curb rising inflation, a sentiment underscored on Tuesday by Reserve Bank of Australia (RBA) Governor Philip Lowe, who pointed in a speech to further rate hikes. read more

“As we chart our way back to 2 to 3% inflation, Australians should be prepared for more interest rate increases,” Lowe warned. “The level of interest rates is still very low for an economy with low unemployment and that is experiencing high inflation.”

Continuing the central bank theme, two Federal Reserve policy makers are due to speak later in the day, as are two speakers from the Bank of England, with traders watching their remarks closely for clues about the interest rate trajectory.

In currency markets, the dollar index , which tracks the greenback against a basket of its peers, edged down a little in line with the improved risk sentiment to 104.37, as the dollar lost a modicum of ground on the euro

“However, the risk rally should prove to be short-lived as major central banks maintained their hawkish tone,” said Ken Cheung, chief Asian FX strategist at Mizuho in a note.

Last week’s peak of 3.495% was the 10-year yield’s highest since 2011 and came the same day the Fed raised interest rates by a massive 75 basis points.

The United States is in talks with Canada and other allies globally to further restrict Moscow’s energy revenue by imposing a price cap on Russian oil without causing spillover effects to low-income countries, Treasury Secretary Janet Yellen said on Monday. read more

Bitcoin was at $20,629 having failed to break strongly above or below the psychologically significant $20,000 level in recent days. read more