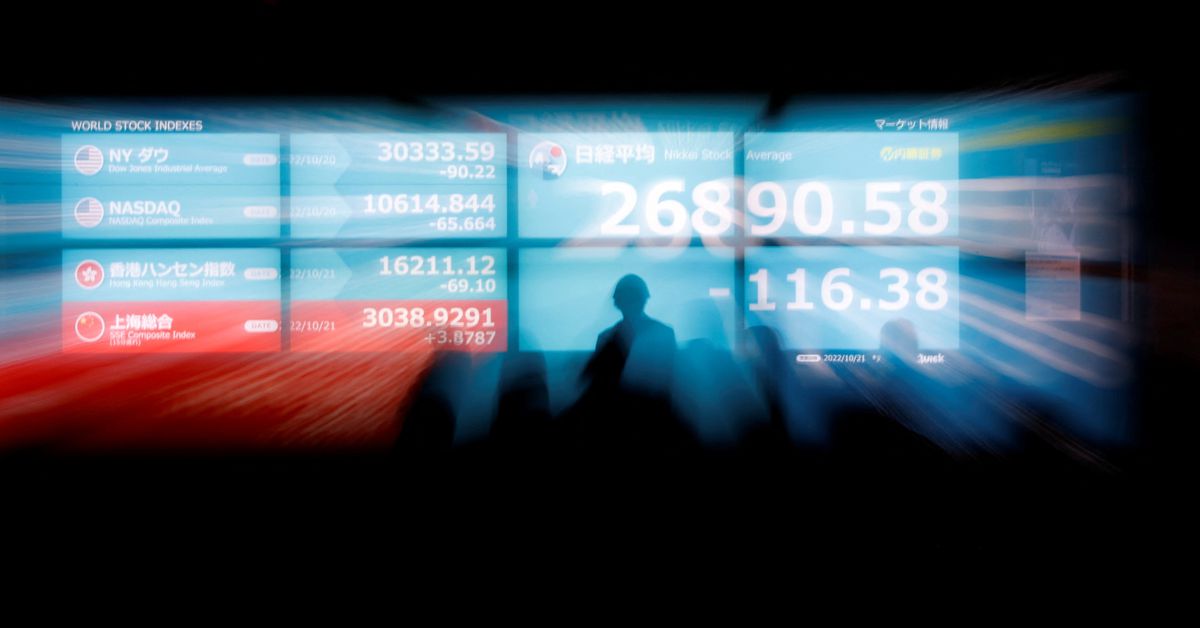 LONDON/SINGAPORE, Nov 4 (Reuters) – Global stocks rose on Friday for the first time in three days ahead of key U.S. jobs data, as investors took heart from reports China may relax its COVID rules, boosting major currencies against the dollar and prompting a 2% rally in oil.

The MSCI index of global shares (.MIWD00000PUS) rose 0.3% on the day, breaking two straight days of losses, but still headed for a near-3% weekly loss, after more big rate hikes from the Federal Reserve and the Bank of England.

China is working on a plan to end a system that banned individual flights for bringing in passengers infected with the COVID-19 virus, Bloomberg News reported on Friday, citing people familiar with the matter.

On Friday, China reported its highest daily count of new local COVID-19 cases in six months and a foreign ministry spokesman said he was not aware of the report, but equities still surged, pushing Shanghai’s CSI 300 (.CSI300) up by over 3%. The Hang Seng (.HSI) rose 5.4%, bringing gains for the week to 8.75%, its strongest weekly performance in a decade.

“That rumour that we heard earlier in the week about possible experiments with moving away from zero COVID, I’m guessing is still driving things forward, which is a pretty flimsy pretext for the stocks to be rallying,” ING regional head of research Robert Carnell said.

“We don’t think we’re going to see any meaningful change in policy until at least after the two sessions meeting in March. So that’s a long way away between now and then,” he added.

China-sensitive stocks, such as mining companies and luxury goods makers, rallied in Europe, lifting the STOXX 600 (.STOXX) by nearly 1% to a seven-week high. U.S. index futures , rose between 0.6-0.8%, suggesting an upbeat start on Wall Street, where the S&P 500 (.SPX) is heading for its largest weekly decline since late September.

With risk appetite running higher than usual, the dollar fell against a basket of major currencies, dropping 0.4% , which in turn boosted the likes of the euro, oil and gold prices.

But those gains were muted given the month’s most-watched data point – U.S. employment – was due later.

Economists expect 200,000 workers to have been added to U.S. non-farm payrolls in October. This would mark the slowest pace of growth so far in 2022, but most metrics suggest the labour market remains robust.

This has been one of the factors that has enabled the Fed to relentlessly raise interest rates to tame inflation. Wage inflation is expected to have posted another increase last month, albeit at a slower pace.

“This is obviously a double-edge sword, in so far as it offers some comfort to the FOMC in its inflation battle, but on the other hand puts a bigger squeeze on household incomes,” ADM Investor Services chief global economist Marc Ostwald said.

Markets were rattled earlier in the week by Fed Chair Jerome Powell, who said it was “very premature” to think about slowing the pace of monetary tightening and that interest rates would likely peak higher and later than investors currently expect.

“Chair Powell removes the punchbowl yet again, in response to a tiny bit of partying,” Citi analysts said, referring to the past few days’ rise in equities over hopes of a change in tone from the central bank.

In currencies, sterling rose 0.75% against the dollar to $1.12430, paring some of Thursday’s 2%-drop after the Bank of England said the economy as facing a two-year recession even as it raised rates by the most since 1989.

In commodities, oil bounced, fuelled by hopes for a relaxation of zero-COVID rules in China, which is home to some of the world’s biggest energy consumers.