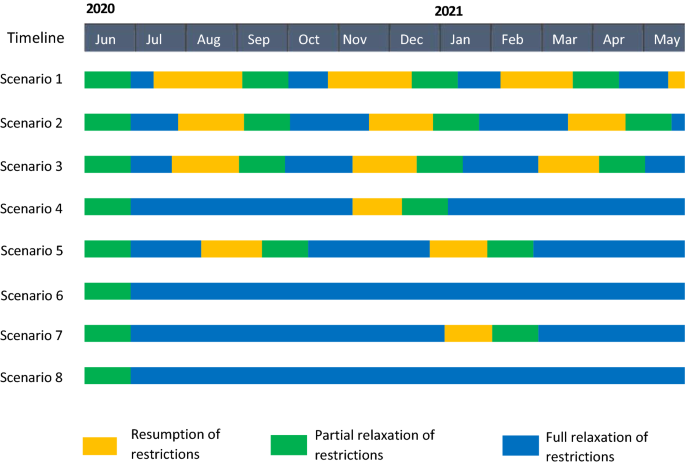 We adapted an existing stochastic, discrete-time model of community transmission of SARS-CoV-211,12 by adding a lagged transmission of community-acquired infections to household members and a compartment to represent quarantine of those who have received testing or contact tracing. We measured outcomes of infections, hospitalizations, and deaths as well as duration, frequency, and recurrence of stay-at-home restrictions by May 31, 2021. The revised model structure has been presented elsewhere12. Briefly, the model represents individuals who are susceptible (S), exposed (E), infectious (I), quarantined (Q), or removed/recovered (R).

The model structures are described as following:

In addition, we assumed a secondary attack rate of 25% for within-household transmission after March 17, 2020 when stay-at-home policies were instated19. The model accounted for age-specific and comorbidity-adjusted infection-fatality ratio (IFR). We calculated the age-specific IFR adjusting for the increased severity for hospitalizations and deaths among those with underlying comorbidities by age groups (10–19; 20–29; 30–39; 40–49; 50–59; 60–69; 70–79; 80 + years). IFR was inferred from the case-fatality ratio in South Korea by mid-March 2020 (1.01%). Given that the testing and contact tracing were widely conducted in Korea, we assumed that CFR would provide a reasonable approximation for IFR. By early March, ~ 95% of the contacts of the confirmed index cases related to the main outbreak cluster in Daegu, Korea, which accounted for > 79% all confirmed cases in Korea, were traced and tested20. Therefore, we assumed the IFR would be slightly lower by 5%, resulting in the overall IFR estimate of 0.94. Then, we estimated the IFR in NYC adjusting for the age and comorbidities distribution in NYC. The model was implemented in Python 3.7 and outputs were analyzed and graphed using R 3.6.1.

The model used NYC’s distribution of age and chronic condition, obtained from New York Behavioral Risk Factor Surveillance System Data in 201721 and 2013–2014 New York City Health and Nutrition Examination Survey (NYC HANES)22, and census23 to estimate the impact of the epidemic on COVID-19 hospitalization and mortality. We assumed that the average time from infection to symptom onset to be 5.1 days24, and from symptom onset to hospitalization to be 11 days25. Based on the information provided by the NYC Department of Health and Mental Hygiene (DOHMH) during the early epidemic by April 2020, the average lengths of stay at hospitals among non-intensive care unit (ICU) admitted patients were assumed to be 11 days. Critically ill patients were assumed to be first admitted to non-ICU hospital beds for three days, then transferred to the ICU for 21 days before returning to non-ICU hospital beds for another 14 days. Given the absence of effective interventions in the early epidemic, we assumed that 28.8% of the hospitalized would die, with an average length of ICU stay of 2 days before death25. In addition, the model was conducted in the context of no available vaccinations, given the timeline of vaccine development. Table 2 shows the list of parameters with uncertainty ranges. In sensitivity analysis, we varied the key parameters across the uncertainty ranges and measured the cumulative deaths (Figure S1).

The model was calibrated to the publicly available data on daily new hospitalizations for COVID-19 and confirmed and probable data COVID-19 attributable deaths from the NYC DOHMH and the internal data on daily number of patients with COVID-19 in ICUs from the NYS Department of Health’s Hospital Emergency Response Data System (HERDS). The data for HERDS data was self-reported by hospitals. An effective reproduction number (Re) was adjusted to minimize the sum of squared residuals between these data and their corresponding model outputs. The daily hospitalization data in mid-April was updated later with more certainty, and this update increased reported hospitalizations by 30% in the two months following the initial report. Therefore, when calibrating the model, we raised the upper 95% confidence interval to allow for up to 30% under-reporting of daily new hospitalizations and number of patients with COVID-19 in ICUs. New daily cases of COVID-19 were not used as a target for calibration due to changing testing eligibility and accessibility throughout the period of analysis. However, the calibration was constrained to ensure that new infections in the simulation must exceed the number of new cases identified through testing.

We estimated the initial reproduction number (R0) at the beginning of the epidemic in NYC and the Re after the pandemic peak of March–April 2020. The estimated Re under subsequent relaxation of stay-at-home restrictions was obtained by propagating the uncertainty in the initial R0 while maintaining fixed benchmarks for possible levels of mask-wearing and social distancing. On June 1, 2020, NYC launched a new contact-tracing program, NYC Test & Trace Corps, hiring 3,000 contact tracers and set a target of carrying out 50,000 daily tests16,17,37. Based on these data, we assumed that a citywide random daily testing of 50,000 and contact tracing program with 3000 tracers from June 1, 2020 to May 31, 2021. We assumed that each tracer could successfully trace two contacts of an index case per day, and that contacts were quarantined for an average of four days after being infectious (i.e., half of the average infectious period of eight days). All methods were performed in accordance with the relevant guidelines and regulations.

Model scenarios for adherence to social distancing and mask-wearing

We simulated model scenarios in which relaxation of stay-at-home restrictions occurred with different degrees of individual adherence to social distancing and mask-wearing. At one extreme, we simulated a return to pre-pandemic activity with no social distancing or mask-wearing. Social distancing was represented as keeping 6 feet of distance from others. We applied the effect of inter-person spacing on SARS-CoV-2 transmission from a meta-analysis of close contact events8 where the risk of transmission from an infected individual was reduced by 2.02 times per additional 1 m distance. Social distancing scenarios assumed that 50% of population would maintain 6 feet of distance with all contacts outside the household. We further assumed four different levels of adherence to mask-wearing. Two recent meta-analyses estimated that wearing any face masks including surgical masks, 12–16 layer cotton masks, or N95 respirators reduces transmission by 65–85%7,8. We conservatively used the lower estimate of 65% as a benchmark for mask efficacy. This was further modified by the estimated proportion of individuals wearing masks outside the home, estimated at between 65% and 89% in surveys in NYC and elsewhere38,39,40,41. Given that the impact of mask-wearing would greatly vary by population coverage and adherence, we varied the percentage of adherence to wearing any mask correctly at 50%, 70%, and 90% to represent low, moderate, and high adherence38,39,40,41.

This study used publicly available data and was exempt from ethical review by the Institutional Review Boards of both New York University Grossman School of Medicine and NYC DOHMH.