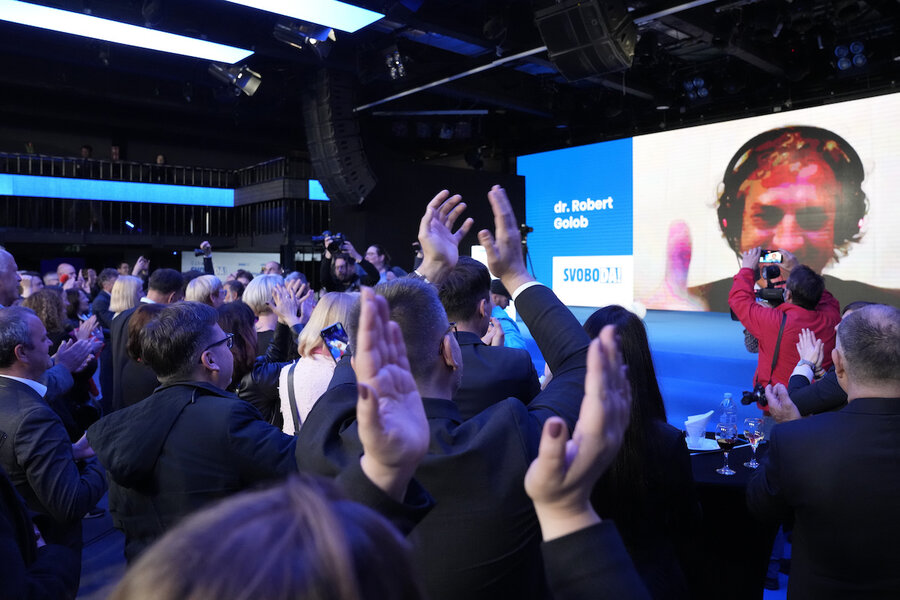 An opposition liberal party convincingly won Sunday’s parliamentary election in Slovenia, according to early official results, in a major defeat for populist Prime Minister Janez Janša, who was accused of pushing the small European Union country to the right while in office.

The Freedom Movement won nearly 34% of the votes, compared with around 24% for the governing conservative Slovenian Democratic Party, state election authorities said after counting over 97% of the ballots.

Trailing behind the top two contenders were the New Slovenia party with 7%, followed by the Social Democrats with more than 6% and the Left party with 4%.

The results mean that the Freedom Movement, a newcomer in the election, appears set to form the next government in a coalition with smaller leftist groups. The party leader addressed supporters via a video message from his home because he has COVID-19.

“Tonight people dance,” Robert Golob told the cheering crowd at the party headquarters. “Tomorrow is a new day and serious work lies ahead.”

Mr. Janša, an ally of right-wing Prime Minister Viktor Orbán of Hungary, congratulated the “relative winner” of the election in a speech.

“The results are as they are,” Mr. Janša said, praising his government’s work. “Many challenges lie ahead for the new government, whatever it may look like, but the foundations are solid.”

A veteran politician, Mr. Janša became prime minister a little over two years ago after the previous liberal premier resigned. An admirer of former United States President Donald Trump, Mr. Janša had pushed the country toward right-wing populism since taking over at the start of the COVID-19 pandemic. During the 2020 U.S. presidential election, Mr. Janša congratulated Mr. Trump on his “victory” long before the official results were published. Melania Trump, the former first lady, is a native of Slovenia.

Reflecting strong interest in Sunday’s election, turnout was higher than usual – around 67% of Slovenia’s 1.7 million voters cast their ballot, compared with 52% in the previous election in 2018.

Mr. Golob, a U.S.-educated former business executive, came out as a frontrunner shortly after entering the political scene. The Freedom Movement party has advocated a green energy transition and sustainable development over Mr. Janša’s nation-centered narrative.

Liberals had described Sunday’s election as a referendum on Slovenia’s future. They argued that Mr. Janša, if reelected, would push the traditionally moderate nation further away from “core” EU democratic values and toward other populist regimes.

Opinion polls ahead of the vote had predicted that the leading parties would be locked in a tight race.

Mr. Janša’s Slovenian Democratic Party won the most votes in an election four years ago, but couldn’t initially find partners for a coalition government. He took over after lawmakers from centrist and left-leaning groups switched sides following the resignation in 2020 of liberal Prime Minister Marjan Šarec.

Mr. Janša, once in power, faced accusations of sliding toward authoritarian rule in the style of Mr. Orbán, drawing EU scrutiny amid reports that he pressured opponents and public media, and installed loyalists in key positions for control over state institutions.

Get stories that
empower and uplift daily.

The Freedom House democracy watchdog recently said that “while political rights and civil liberties are generally respected [in Slovenia], the current right-wing government has continued attempts to undermine the rule of law and democratic institutions, including the media and judiciary.”