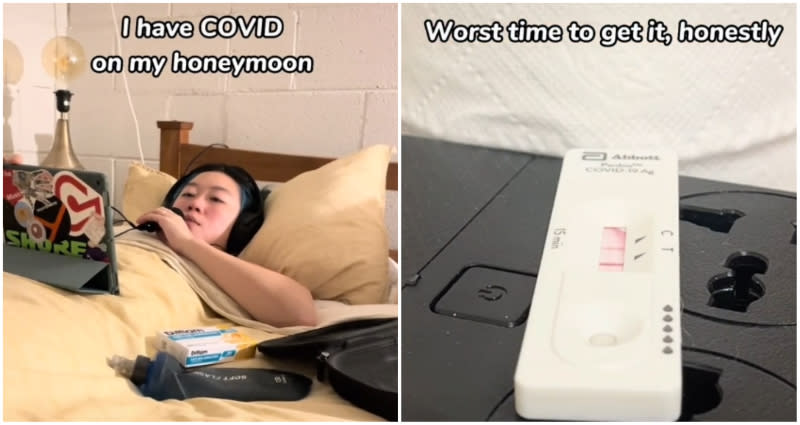 A Singaporean woman who contracted COVID-19 during her honeymoon uploaded a video to TikTok on Monday of her performing a song she wrote while in quarantine about her unfortunate situation.

Amanda Ong, also known as @musicianmandy, is seen lying in bed while singing a song that she wrote while in quarantine about her untimely diagnosis. In the lyrics, Ong explains that she is suffering from “mild symptoms” and describes her honeymoon as the “worst time to get it, honestly.”

Due to her mild symptoms, Ong states in her song that her husband “keeps forgetting he can be around other people but without me.”

More from NextShark: Joji enters top 10 of Billboard Hot 100 chart for first time with viral ‘Glimpse of Us’

In the video, Ong shows glimpses of her positive COVID-19 test and the voice recording for her song as well as screenshots of various messages she received from people who had all tested positive two weeks prior. She asks, “What were the odds?” while pointing out that she managed to dodge “26 other positives” two weeks ago.

Although she is in quarantine, Ong expressed gratitude for not feeling “physically crappy.”

TikTok users praised Ong for making light of her situation and turning it into a catchy song.

“And the positive of it (no pun intended) is that the world gets a bop,” one user commented.

“This song is amazing, hope you feel better soon tho!” another user wrote.

Ong wrote in the comment section that she loves how “the situation gave me a song” and explains that her husband caught the virus “right after the wedding along with the 25 other guests.”

More from NextShark: Nintendo’s Masayuki Uemura, creator of the NES and SNES, dies at 78