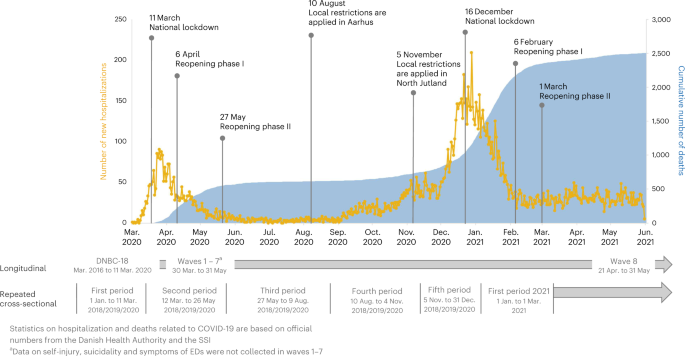 In this study with tandem use of longitudinal and repeated cross-sectional data, we observed that during the lockdowns, including a more prolonged second lockdown during the winter season, there was no increase in self-injury, suicide ideation or symptoms of EDs. If anything, our longitudinal data indicate a post-lockdown reduction in self-injury and suicide ideation among both men and women and smaller reductions for symptoms of EDs in women. Further, we found no indication that the severity of self-injury, suicide ideation and symptoms of EDs worsened during lockdown. For suicide attempt in men, we found weak indication of an increase in the longitudinal data while no change was observed for women or for either men or women in the repeated cross-sectional data.

Thus, our findings overall do not support that the aggravation in mental health documented in several countries after lockdown have yet resulted in young adults having a higher risk of self-injury, suicidality and ED symptoms. As outlined in the introduction, findings from previous studies are inconsistent. The mixed findings in the literature may result from methodological differences. Cross-sectional studies using health register data all found a decline in self-injury- and suicidal behaviour-related hospital contact during lockdown7,8,9,10,11. This reduction might in part be due to bias caused by the general reduction in healthcare use and it is important to note that self-injury and suicidality with hospital contact only covers the most severe cases. However, cross-sectional studies using self-reported data, including this study, also found either a reduction or no change in self-injury and suicide ideation and attempts during lockdown12,13. In contrast, a longitudinal study in China with self-reported data suggested an increase in both self-injury and suicide ideation and attempts during lockdown14. The longitudinal study only included 4 months of lockdown, had a small population (n = 1,241) and participants were aged 9–16 years, which could, together with differences in the lockdowns, explain why the findings differ from ours even though the methodology is very similar. We were not able to include suicides from the cause-of-death register to explore the potential increase in suicide among especially young women as suggested by preliminary unvalidated Danish data and current international literature15,16,17,18. Regarding EDs, previous studies used data on new ED diagnosis or hospital admissions, which increased during lockdown contrary to our findings19,20,21. Because there was a general reduction in healthcare use due to lockdown, this increase may even be understated but differences in healthcare systems and thereby the registers may also affect comparability between studies. In this study, we measured the prevalence of ED symptoms while register studies measure the incidence of new diagnoses. Further, these health register measures of EDs cover more severe cases compared to our self-reported symptoms of EDs. However, our sensitivity analyses, which included symptoms that fulfilled our definition of threshold EDs (weekly symptoms), likewise indicated no signal of an increase after lockdown (Extended Data Figs. 1c and 2c).

In general, the previous literature has varied with regard to follow-up time, origins from different countries, the course of the pandemic, the public health precautions, for example, the extent of lockdown; thus, the impact on self-injury, suicidality and EDs may be different. Further, even small age differences in study populations focusing on young adults may explain the inconsistent result. Importantly, our population mainly consisted of young adults studying and still living at their parental home and our findings cannot necessarily be generalized to either younger nor older populations, who are more on their own and therefore could be more vulnerable to the collateral damages of lockdown.

Possible reasons for the decrease in self-injury, suicide ideation and symptoms of EDs in the longitudinal data is that the social distancing actually has been beneficial for some young adults23. Being closer to their families, having more time and fewer obligations to activities such as sports, part-time jobs and parties, that is, generally a reduction in the pressure of living up to the social norms for young adults could have impacted mental health in a positive direction. Further, it is possible that the impact of lockdown has been positive in some groups while negative in other groups, which equalizes the impact. A similar DNBC study found slight interim deterioration in mental health in young adults without pre-existing depressive symptoms after lockdown while no differences were observed in young adults with pre-existing depressive symptoms1. Furthermore, the initial decline mental health quickly attenuated and may have been a shock effect that did not manifest as self-injury, suicidality and symptoms of EDs.

A strength of this study is the use of self-reported data that capture more subtle cases than register data and still provide relevant information for screening and prevention purposes24,25. Further, our study populations are from a large cohort consisting of relatively healthy and well-functioning young adults.

The results using longitudinal and repeated cross-sectional data were not completely consistent, although both suggested that the proportion of young adults with self-injury, suicide ideation and symptoms of EDs did not increase during lockdown. Different strengths and limitations in the study design could have resulted in the different results: (1) because the longitudinal data include a specific COVID-19 related survey, participants may have overstated or understated their answers in accordance with their feelings of lockdown making the comparison with the pre-lockdown measure biased. This is less of a concern in the repeated cross-sectional data only using the DNBC-18 because it was an ongoing survey that did not mention the COVID-19 pandemic in any way; (2) when using longitudinal data there is a risk of differential attrition because young adults with mental health problems are less likely to participate in follow-ups26. This may have resulted in bias as the observed decline in self-injury, suicide ideation and symptoms of EDs in wave 8 may be explained by loss to follow-up rather than the lockdown; however, we used sampling weight to limit this bias. Further, the indication of an increase in suicide attempts among men indicates that people with severe mental health problems also participated. The repeated cross-sectional data are only vulnerable to differential attrition if the participation in DNBC-18 systematically changed over year of birth. There were no notable differences in characteristics of participants completing the DNBC-18 in each year from 2018 to 2021 (Supplementary Table 1); (3) a major strength of the longitudinal data is that we analysed the same young adults pre- and post-lockdown and thereby all time-invariant factors are adjusted for. In the repeated cross-sectional data, we compared groups of young adults based on birth year and the results may reflect factors related to birth year rather than lockdown. However, the level of self-injury, suicidality and symptoms of EDs were stable during the entire pre-lockdown period and thus it is unlikely that a sudden change would have happened in the absence of lockdown; (4) a strength in comparing different young adults aged 18 years pre- and post-lockdown is that the age is adjusted for. In the longitudinal data, the pre-lockdown measures were collected at age 18 while the post-lockdown measures were collected at age 19–23. Thus, the time interval between pre- and post-measure varied; as many major events, such as graduating from high school, moving away from parents and starting to shape the future happens in this age range, the results may be biased. However, sensitivity analyses showed similar results when restricting the time interval to 2 years, indicating that the varying time interval and thereby age cannot explain the entire observed decrease in self-injury, suicide ideation and symptoms of EDs during lockdown (Extended Data Fig. 5). The sensitivity analyses showed no change in the proportion of suicide attempts among men after lockdown, which could be explained by data insensitivity as the frequency was very low; (5) the measures of self-injury and suicidality were defined as being within the last year. Thus, in the longitudinal set-up the measures were restricted to an entire year of lockdown and thereby adjusted for seasonal differences even though the pre-lockdown data were collected at different times of the year. In the repeated cross-sectional data, the post-lockdown measures will somewhat overlap the pre-lockdown period until the last lockdown period that covers an entire year of lockdown. However, analyses where self-injury and suicide ideation were restricted to being within 4 weeks instead of 1 year did not change the results (Extended Data Fig. 6). Symptoms of EDs were defined as being within the last month. Seasonal differences in ED symptoms could bias the results in the longitudinal data because the pre- and post-lockdown data were mainly collected at different calendar periods. However, the repeated cross-sections did not reveal any clear seasonality because the predefined lockdown-relevant periods represent different periods of the year; (6) the self-reported measures of self-injury, suicidality and symptoms of EDs are prone to misclassification. For self-injury and suicidality, this is not a great concern because the possible misclassification is assumed to be the same before and during lockdown. The participants replying ‘do not know’ to these measures may be misclassified as not having the behaviour. Our sensitivity analyses excluding these participants did not change the results. For symptoms of EDs, the before and during lockdown measures may not be completely comparable because the lockdown led to more meals being prepared and eaten at home and limited the exercise opportunities (closed fitness centres and sports activities), which is measured in our ED items. However, from the beginning of the pandemic the Danish health authorities had campaigns on the importance of continuing physical activity outdoor. Because our study population is older than the peak age of incident EDs, it may not be possible to generalize these results to younger age groups27. Further, because we measured prevalence rather than incidence in an age group with low incidence, our study population may not have been large enough to detect a possible increase. Self-reported symptoms of EDs are distinct from clinical diagnoses, which is why our frequency of EDs is higher than in studies using clinical diagnosis. Estimates indicate that only approximately 30% of people affected with EDs (fulfilling threshold diagnostic criteria) seek treatment; it may even be as low as 20% among adolescents25,28. Since substantial cross-over between threshold and subthreshold variants of EDs exists, it is a strength that we could distinct severity, that is, weekly versus monthly frequency of symptoms29.

In conclusion, this study suggests that during the lockdown, there was no increase in the proportion of young adults with self-injury, suicide ideation or symptoms of EDs. Findings from longitudinal analyses even indicate that the proportion of self-injury and suicide ideation decreased slightly post-lockdowns in both men and women, while a minor decrease in symptoms of EDs were observed only in women. An indication of increase in suicide attempts was observed only among men in the longitudinal data, while no indication of sex-specific changes was supported in the repeated cross-sectional analyses.