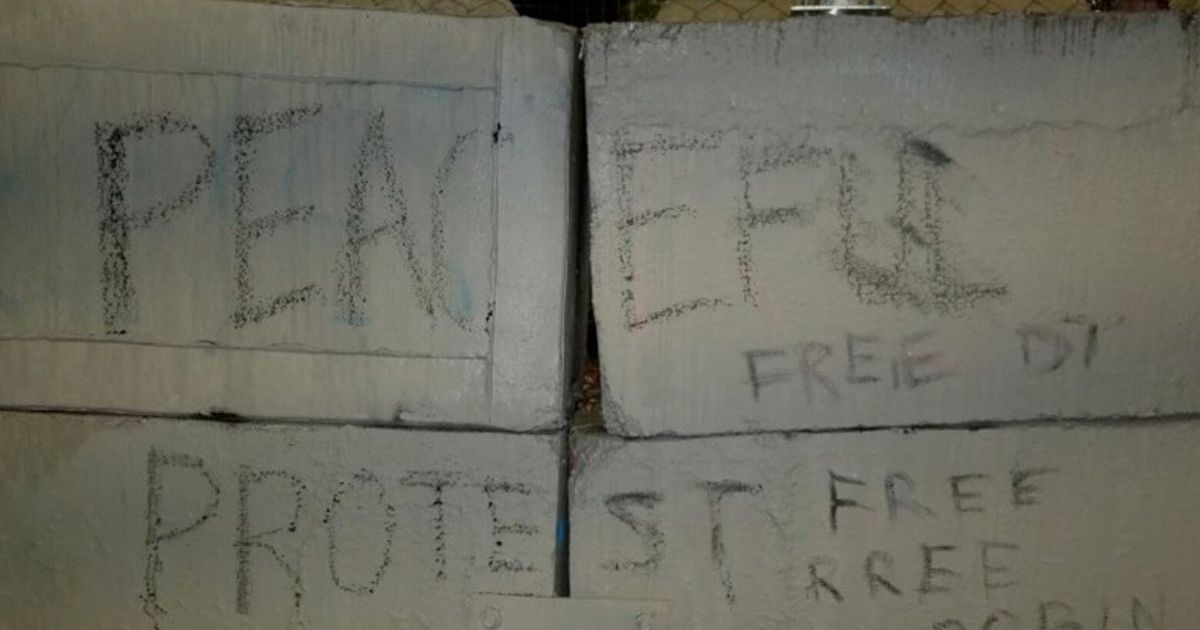 Seattle police arrested and jailed four people who used chalk and charcoal to write political statements in front of the department’s East Precinct in 2021, overriding King County Jail policies against booking nonviolent offenders at the height of the COVID-19 pandemic, according to a federal lawsuit.

The civil-rights complaint alleges officers violated the young protesters’ constitutional rights and challenges the legality of Seattle’s ordinance outlawing graffiti, alleging police selectively enforce the statute and often tolerate “politically neutral and pro-government chalking” while citing or arresting those whose views they don’t agree with.

The lawsuit alleges officers arrested and booked into jail Derek Tucson, a Seattle man, for writing the words “peaceful protest” the evening of Jan. 1, 2021, on barriers constructed outside the SPD’s East Precinct on Capitol Hill, which had been a focal point of Black Lives Matter protests after the May 2020 murder of George Floyd by Minneapolis officers.

The barriers, the lawsuit noted, had been placed on a public sidewalk outside the precinct.

“When several bystanders … responded by writing similar messages in charcoal and children’s sidewalk chalk, defendants arrested them too.”

Robin Snyder, Monsieree de Castro and Erik Moya-Delgado were also booked into the King County Jail on suspicion of violating the city’s graffiti ordinance. They’re named as plaintiffs in the lawsuit, which alleges at least a dozen officers were involved in the arrests.

However, the lawsuit says that policy was subject to some exceptions at the request of local law enforcement officials and an executive in the office of then-Mayor Jenny Durkan.

The complaint alleges an unidentified “executive leadership” official in Durkan’s office used their position to issue an “override” of the jail policy for people arrested during political protests, and an SPD assistant chief applied that standard to those who wrote on the barricade.

The four defendants were released Jan. 2, 2021, according to the lawsuit, filed by attorneys Braden Pence and Nathaniel Flack from the Seattle civil-rights firm MacDonald Hoague & Bayless, as well as Seattle lawyer Neil Fox.

Pence said none of the four were ever prosecuted for the graffiti.

The lawsuit includes photographs of a series of examples, including a large sidewalk-chalk message proclaiming “We (heart) SPD” and “Defend SPD,” where no enforcement action was taken. One photo appears to show a bicycle officer drawing on a public sidewalk.

“Such viewpoint discrimination … the Constitution does not allow,” the lawsuit says.

The lawsuit challenges the constitutionality of the city’s ordinance that criminalizes “property destruction,” which provides police with the power to arrest anyone who “writes, paints, or draws” on any building, structure or property they don’t own — even if they have the owner’s permission.

That permission would become relevant only when the city attorney screens the case for possible prosecution, or at trial, when it could be presented as an “affirmative defense,” the lawsuit says.

That allows Seattle officers to arrest someone regardless of whether they had permission, and lets lawyers and judges sort it out later, according to the lawsuit and Pence.

By contrast, the lawsuit claims, the state law defining property destruction states the statute doesn’t apply to someone who has the property owner’s permission.

“The plain language of the ordinance would allow defendants to arrest and prosecute children for chalking a rainbow on the sidewalk in front of their home,” the lawsuit says.