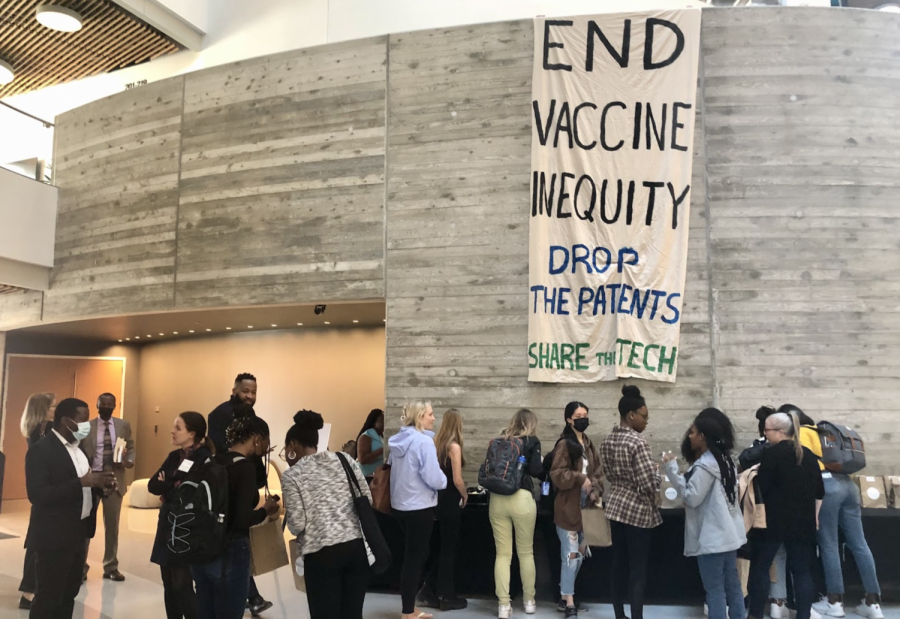 Scientists, politicians and activists gathered for a virtual town hall April 21 organized by People’s Action to discuss how medical companies like Moderna are posing challenges to achieving global vaccination against COVID-19.

“Share Science, End COVID: What We Need To Do Now To End The Pandemic” included guest speakers such as Rep. Ayanna Pressley of Massachusetts’ 7th District, Achal Prabhala of Access IBSA, an organization that advocates for medical accessibility for people in India, Brazil and South Africa and Ady Barkan, the co-director of Be A Hero.

“I’ve been concerned with the way wealthy nations like the U.S. have hoarded COVID vaccines, and the way big pharma is controlling our access to medicines is deeply unfair,” said Gwen D’Arcangelis, a member of Justice is Global who is involved with the campaign End the Pandemic Everywhere, in her introduction to the event.

The experts on the panel further explained the global inequality of vaccine distribution, emphasizing that major pharmaceutical companies are not distributing vaccines or vaccine technology to areas with lower vaccination rates.

“We are here together because of Moderna’s refusal to let go of its monopoly on a vaccine that the public helped to develop,” Barkan said. “American taxpayers funded [almost] 100% of Moderna’s coronavirus vaccine project, while scientific innovations from around the world laid the foundation for the vaccine. Instead of continuing to work together to end the pandemic, Moderna has chosen to turn its back on the world. Despite safe and effective vaccines like Moderna’s, thousands of people are still dying every day because these protections have not been made accessible to all.”

Ben Levenson, the deputy director of Justice is Global, told The News he believes that Moderna is attempting to protect the future of their company by keeping its mRNA technology private, thereby preventing other companies from using the technology for other research for free.

“There’s an opportunity for [Moderna] to support access for millions of people — billions of people, honestly … and they’re choosing not to. It’s a choice, and it’s a choice that is not even actually about profit, it’s about monopoly control,” Levenson said. “Moderna could make billions more dollars if they chose to license their technology to companies in the global south, and they’re choosing not to because, they have said, they don’t want to support their competitors.”

At the beginning of March, Moderna announced that it would be creating an mRNA vaccine production facility in Kenya that could produce up to 500 million doses of mRNA vaccines each year, including COVID-19 vaccines, starting in 2023. The company also later announced an update to its 2020 pledge not to enforce its COVID-19 vaccine patent during the course of the pandemic. The nonenforcement now only applies to 92 low- and middle-income countries included in the Gavi COVAX Advance Market Commitment, or AMC, that have been identified as having barriers to accessing the vaccine.

The patent can now be applied to many middle-income countries excluded by the AMC, referred to as “non-AMC countries.” For these non-AMC countries, Moderna indicated that it will license its technology “on commercially reasonable terms.” The company’s pledge only includes the COVID-19 vaccine, so even the countries that are not subject to the COVID-19 patent will still be prohibited from using patented mRNA technology to develop other vaccines against other diseases.

At the event, Prabhala explained that the mRNA vaccines produced by Moderna and Pfizer are more effective at preventing COVID-19 transmission in more contagious variants, but this technology has been predominantly limited to the United States, despite the fact that hundreds of companies in other countries have the ability to produce them.

“The problem is that mRNA vaccines are this incredibly new technology, which sometimes leads people to believe that they are the most complex technology, that they are the hardest to make,” he said. “Instead, a more helpful way to think about them is like an MP3 file as compared to them actually manufacturing a vinyl record. You can imagine how quick and easy it is to make an MP3 file, and how difficult it is to make a record, and that’s roughly what the difference is between what I would call pre-pandemic vaccines, our older technology of biological vaccines, and mRNA vaccines, which eliminate the most complex and puzzling and difficult aspects of creating vaccines as we traditionally know them.”

Traditional biological vaccines, which Prabhala compared to vinyl records, work by introducing a small amount of dead or weakened virus or bacteria into the body, which triggers an immune response and allows the immune system to create tools to rapidly recognize and fight off the pathogen, without causing illness. This type of vaccine is the only kind available in many countries, including India.

mRNA vaccines, which Prabhala compared to MP3 files, work by introducing a piece of messenger RNA, or mRNA, that codes for a viral or bacterial protein. When the body translates the mRNA into the foreign protein, the body recognizes it as a pathogen and the immune system follows the same process as in traditional vaccines. The only FDA-approved mRNA vaccines are those for COVID-19, though they have been studied for use for the flu, Zika virus and other diseases.

mRNA vaccines are faster, easier and cheaper to produce than traditional vaccines, leading to a strong push against pharmaceutical companies Moderna and Pfizer to share the technology with companies around the world.

In a statement read by D’Arcangelis at the event, Sen. Elizabeth Warren emphasized that the $2.5 billion in government funds and help from government scientists from the National Institutes of Health were vital in helping these companies to develop the mRNA vaccine, citing these as reasons why the pharmaceutical monopoly on the technology is unethical.

“If pharmaceutical companies like Moderna and Pfizer won’t put people above profit, we must take action,” Warren wrote in her statement to the Justice is Global team. “That’s why I’ve urged the Biden administration to immediately invoke the Defense Production Act to ensure the transfer of mRNA vaccine technology and broker an international agreement to waive vaccine and other COVID-related intellectual property restrictions. These actions are vital to prevent the emergence of another deadly variant.”

This town hall comes following an April 13 speech at Northeastern’s Interdisciplinary Science and Engineering Complex, or ISEC, by Moderna’s senior vice president of commercial vaccines, Patrick Bergstedt, about the manufacturing facility in Kenya. At this event, students from Boston University hung a banner in the ISEC atrium reading “End Vaccine Inequity / Drop the Patents / Share the Tech.”

According to a press release from a Northeastern student, the two students from Boston University were issued trespassing notices by the Northeastern Police Department, which bans them from entering any Northeastern property in the future. The press release indicates that both students plan to appeal the notices.

“We were there for no more than 10 minutes,” said Alexia Nizhny, a senior at Boston University who was issued a trespassing notice, in the press release. “There was no shouting, no outrage, no disruption. Getting banned from Northeastern for peacefully holding up a banner just shows that the school cares more about its ties to Big Pharma than the millions of people who don’t have access to the vaccine because of patents.”

The town hall also comes in advance of a rally planned as part of the End the Pandemic Everywhere campaign on April 28, the day of Moderna’s annual shareholder’s meeting, where attendees plan to protest outside company headquarters in Cambridge. Levenson, one of the organizers, said he hopes this protest will be “game-changing action,” influencing shareholders and company leaders to reconsider their current plans.

Justice is Global has organized protests against several pharmaceuticals in the past, including Astrazeneca and Johnson & Johnson. Leaders of the End the Pandemic Everywhere campaign have chosen to focus their current efforts on Moderna for several reasons, predominantly the aid they received from government grants and scientists.

“In our view, that is our vaccine. That’s America’s vaccine, it’s not Moderna’s vaccine, it’s the one that I paid for,” Levenson said. “That gives us leverage to challenge Moderna and say ‘hey, we need a return on our investment … we put money into this, we should have a say over what happens with our investment.’”

Levenson added that other pharmaceutical companies, such as the mRNA competitor Pfizer, are more established and less likely to be affected by such protests. Moderna was founded just 10 years before the pandemic in 2010, and although it had already been researching the use of mRNA vaccines against viruses in the coronavirus family, none of the company’s vaccines had made it to market prior to 2021.

“Before the pandemic, [Moderna] basically didn’t exist. They were a small research firm that had no vaccines that had gone through clinical trials, so overnight, because of this public money, they became this multibillion-dollar company,” he said. “Compared to Pfizer, which has been around for decades, which has loads of other drugs, is much more savvy in terms of political strategies, and they didn’t take any public money to support their vaccine, partly because they knew that would make them vulnerable.”

Speakers at the April 21 event encouraged listeners to engage with the End the Pandemic Everywhere campaign and use their status as American taxpayers to make change through future rallies and events.

“If we don’t vaccinate the world, the variants will not stop. … Our health, our safety, are in danger, and primarily due to corporate greed. What’s it going to take for us to recognize that we are one human family? That our future and our destinies are inextricably linked to our global neighbors?” Pressley said. “If we fail to address the massive disparity in vaccine access, we will only be harming ourselves as more variants continue to emerge. … If we fail to do so, we sacrifice our humanity, because there is no moral justification for amassing billions of dollars at the cost of millions of lives — millions of preventable deaths. I thank you all for giving a damn.”

Sonel Cutler contributed to the reporting of this article.