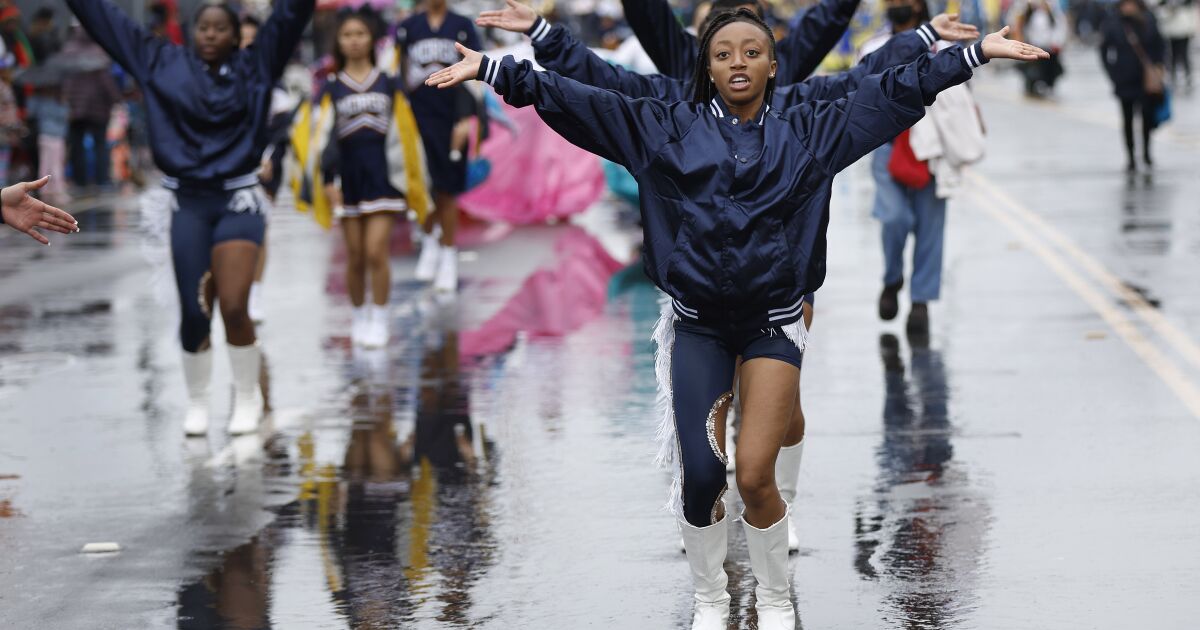 Dance teams, marching bands and scores of other groups paraded in the rain in downtown San Diego Sunday to honor the legacy of Dr. Martin Luther King Jr.

“We’re out here in the rain because it’s important to us,” National City resident Liliana Armenta said, as she stood in the downpour alongside her 12-year-old daughter during the 41st annual Martin Luther King Jr. Parade.

It marked a return after the event was canceled in 2021 and last year because of the COVID-19 pandemic.

Armenta, 48, was one of several parents who said they viewed the parade as an opportunity to teach their children about the principles King stood for, including unity and racial equality.

“I would want people to always remember what Martin Luther King did for all of us, and just to keep him alive through our actions,” Armenta said.

Organizers say the parade is one of the largest of its kind in the U.S. The event is organized by a group King belonged to: the Zeta Sigma Lambda Chapter of Alpha Phi Alpha Fraternity Inc., the oldest African American fraternity.

In addition to dance teams and marching bands, the parade — which traveled down Harbor Avenue near the County Administration Center and the Embarcadero — included a variety of groups, such as Morse High School’s Junior Reserve Officers’ Training Corps and House of Ukraine.

A San Diego State University float had a portrait of King as its centerpiece, along with the phrase “Dreaming of Equality.”

Nakiyah Phillips tried to keep the energy up, cheering as she walked alongside her 16-year-old daughter’s hip hop and majorette dance team, Diamond Dolls.

“We’re out here today to celebrate Martin Luther King (Jr.) Day, get the girls out and enjoy the community and have a beautiful day in this beautiful, rainy weather,” Phillips said. “The girls are just pushing through with their tenacity, and getting out here and having fun no matter rain, shine or cold weather.”

Several organizations that participated in the parade aim to honor King’s legacy through their work. Among them is Black Deported Veterans of America, a San Diego-based organization that was founded last year and supports veterans who face deportation or were recently deported. The group works with veterans from all over the world, including countries in Africa and the Caribbean. The organization advocates on their behalf, connects them with lawyers and supports them in other ways.

“The country has deported them for one reason or another, but we say that after the person has served their country, has served well, they should be granted citizenship, period,” said member Yusef Miller, a veteran who served 24 years in the Navy, including stints in Iraq and Afghanistan.

“They fought for the principles of this country that Martin Luther King stood for, and now that they’ve served the country, they don’t get to enjoy the same things they fought for,” Miller added.