After American football player Damar Hamlin suffered a cardiac arrest during an NFL game in January 2023, claims that nearly 800 athletes collapsed in one year due to the Covid-19 vaccine recirculated online. This is unproven; the allegation rests on an unsourced segment from a far-right cable news channel, and public health agencies have found no link between athlete injuries or deaths and vaccination.

“More than 769 athletes have collapsed on the field during a game from March 2021 to March 2022,” says an article published in April 2022 by the anti-vaccine organization Children’s Health Defense (CHD), which later linked the incidents to Covid-19 shots. 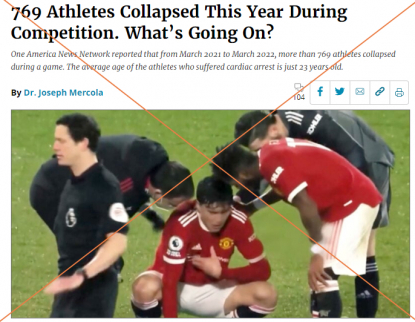 The article — authored by anti-vaccine advocate Joseph Mercola, who AFP previously fact-checked — recirculated in January 2023 when another blog picked it up, amassing hundreds of shares on Twitter.

The posts came after the collapse of Hamlin, a 24-year-old safety for the Buffalo Bills, during a game against the Cincinnati Bengals. He was hospitalized in critical condition, leading some to speculate whether the Covid-19 vaccine was to blame.

But the claims from CHD — a website that AFP has repeatedly fact-checked — and others are unproven.

The articles shared online rely on two main sources: “athlete cardiac arrests” compiled by the website GoodSciencing.com and an April 2022 segment from One America News Network (OANN) anchor Pearson Sharp, who claimed 769 athletes had collapsed between March 2021 and 2022.

AFP has previously fact-checked claims that cite GoodSciencing.com, which maintains a running list of news articles about people of various ages and occupations who reportedly collapsed or died due to a variety of medical conditions. The website does not prove that hundreds of athletes have suffered sudden cardiac deaths as a result of Covid-19 vaccination.

While Sharp did not cite the source for his findings in the OANN report, he did mention the names of two “star tennis players” who had to drop out of the Miami Open in 2022: Spain’s Paula Badosa and Italy’s Jannik Sinner. The former announced in March of that year that she had to retire because she “had been struggling with illness,” while the latter withdrew from a tournament because of foot injuries.

“These are just two of more than 769 athletes who have collapsed during a game on the field over the last year from March of 2021 to March of this year (2022),” Sharp said in the segment. “This is not a coincidence.”

AFP contacted OANN for evidence supporting the 769 figure, but a response was not forthcoming.

After publication, Sharp said in a January 13 email that the “deaths and injuries are taken directly from headlines collected over the past year.” As evidence, he cited a long list of blog posts and articles — including some that are not “athletes or sports-related.”

Among them are reports on the deaths of US martial artist Victoria Lee and NBA player Caleb Swanigan. Lee’s cause of death in December 2022 was not publicly disclosed, while Swanigan died of natural causes in June of that year, according to a coroner’s report.

The list does not prove a recent spike in sudden deaths due to the Covid-19 vaccine.

Alan Kwan, a cardiologist at Cedars-Sinai Medical Center in Los Angeles, told AFP on January 10 that the OANN report “does not come off as credible at all” — adding that the lack of sources makes it difficult to properly investigate the numbers.

“There is a risk of myocarditis with Covid-19 vaccination, which is highest in young males but still not particularly high,” Kwan said.

With about 325,000 adult cases annually, sudden cardiac death is “the largest cause of natural death in the United States,” according to the Cleveland Clinic. The condition is responsible for half of all heart disease deaths, the academic medical center says, and most frequently affects adult men in their mid-30s and 40s.

The US Centers for Disease Control and Prevention (CDC) is monitoring some rare “adverse events of interest” reported after Covid-19 vaccination — including heart conditions that can lead to sudden cardiac death, such as myocarditis. But such ailments are far more common following Covid-19 infection.

“If you are concerned about myocarditis, it would make statistical sense to encourage vaccination,” Kwan said.

The CDC told AFP in a January 10 email that the agency and the US Food and Drug Administration “are conducting the most comprehensive vaccine safety surveillance for Covid-19 vaccines in recent history, using multiple complementary surveillance systems.”

The CDC and the FDA have identified nine deaths as “causally associated” with Johnson & Johnson’s Covid-19 vaccine, which has been linked to a rare blood clotting condition. The CDC recommends Pfizer or Moderna’s shots over Johnson & Johnson’s.

The agency told AFP it “recommends that everyone who is eligible should get vaccinated.”

More of AFP’s reporting on vaccine misinformation is available here.