A video circulating on social media around the world shows American physician Betsy Eads falsely claiming that Malaysia executed a doctor for “killing a patient” with a Covid-19 vaccine. Malaysia imposed a moratorium on executions when the government announced it would abolish the death penalty in 2018, years before Covid-19 vaccine rollouts. A rights group and a lawyer said that no execution had taken place in Malaysia since 2018.

It claims a Malaysian doctor was “sentenced to death” for “intentional homicide by injecting cv19 bioweapons”.

“It has come to my attention that in Malaysia, the first physician was put to death under the Nuremberg Code for giving the bioweapon vaccine and killing a patient,” she says. 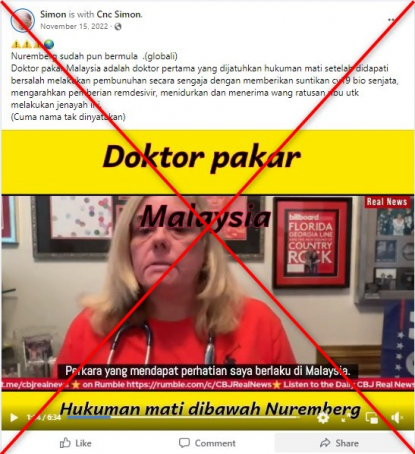 The Nuremberg Code is a set of ethical principles for human experimentation, such as voluntary consent and avoiding unnecessary suffering.

The code was established following the Nuremberg trials of Nazi war criminals, including doctors prosecuted for their roles in conducting medical experiments on concentration camp inmates.

AFP has debunked a wave of misinformation about the Nuremberg Code, including false claims that vaccines violate the principles of the code.

The video attracted more than 8,000 views in similar posts on Telegram, TikTok and Russian platform VK, and circulated on Facebook in various countries, including Australia, South Africa, the United States and the United Kingdom.

Malaysia announced it would abolish the death penalty in October 2018, when it placed a moratorium on executions.

In June 2022, the government said it had agreed to abolish the mandatory death penalty, imposable for 11 offences including murder, kidnapping, possession of firearms and drug trafficking.

Malaysia’s Law Minister Azalina Othman Said announced in December that the government would table a bill on abolishing the mandatory death penalty in February 2023.

“The moratorium is still maintained for death penalty offenders until all amendments to the bill are implemented,” she said in a statement.

A representative for Amnesty International told AFP that while Malaysian courts continue to hand down death sentences, no executions had taken place since the 2018 moratorium was announced.

Dobby Chew, Malaysian human rights lawyer and executive coordinator of the Anti-Death Penalty Asia Network, also told AFP that there had not been any executions in the country since 2018.

The last reported execution was in 2018, Chew said, referring to a report from Malaysian human rights organisation SUARAM.

Malaysian authorities did not publicly name the person who was executed.

According to the Malaysian Federal Court’s website, death sentences issued in 2022 related to cases that started years before the country rolled out its Covid-19 vaccination programme in February 2021.

As of January 16, 2023, Malaysia had administered more than 72.6 million doses of Covid-19 vaccines, with around 84 per cent of the population receiving at least two jabs.

There were no fatalities “directly linked to the vaccine administered”, the National Pharmaceutical Regulatory Agency (NPRA) said in its latest report giving information from September 20, 2022.

AFP found no credible reports that Malaysia executed a doctor for killing a patient with a Covid-19 vaccine.

Health authorities say that Covid-19 vaccines are safe and effective and that the benefits of vaccination far outweigh the risks.