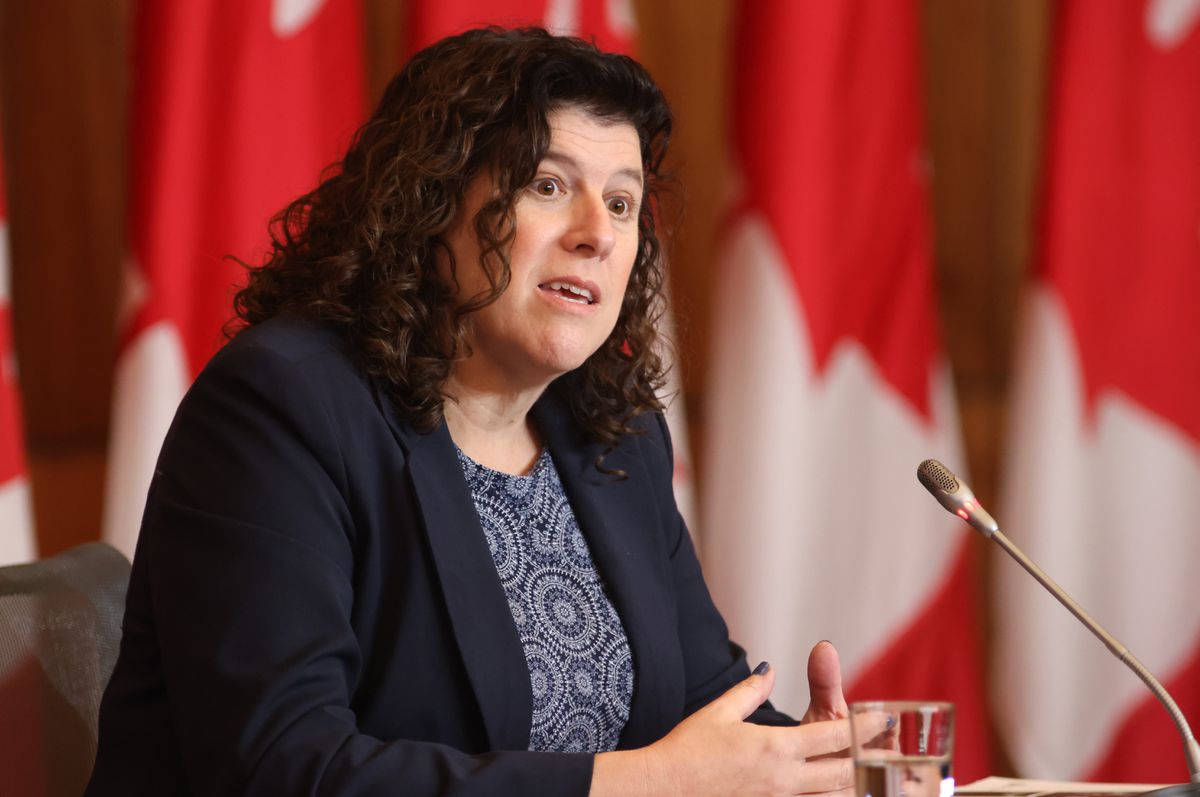 Canada’s Auditor-General has released reports assessing the government’s performance dealing with topics that include Canada’s ability to detect threats to the Arctic as well as the management of chronic homelessness.

Karen Hogan, the Auditor-General, released the assessments on Tuesday. You can find them here.

“When I look at the four performance audit reports we’ve released today, I see a common thread, where government organizations are often slow to effectively use the means at their disposal to provide the best possible outcomes for all people,” Ms. Hogan told a news conference in Ottawa.

“As these audits show, outcomes are always far-reaching. Sometimes, it’s our most vulnerable populations who are disproportionately affected by the failure of government organizations to actively manage issues.”

She was also released special examinations on several Crown corporations: The Jacques Cartier and Champlain Bridges Inc., the Canadian Broadcasting Corporation, and the Windsor-Detroit Bridge Authority.

Senior parliamentary reporter Steven Chase reports here on the Auditor General’s report that the Canadian government lacks a complete picture of who is entering or traversing Arctic waters and the Nanisivik naval facility set up to help with surveillance can only operate four weeks each year.

There’s also a story here on the Auditor-General’s conclusion that the federal government doesn’t know if its initiatives aimed at reducing chronic homelessness are actually working.

And there’s a story here on the Auditor-General saying that the federal government has not given First Nations communities the support they need to respond to emergencies such as wildfires and floods, despite warning about this almost a decade ago.

Please check The Globe and Mail for additional information on the reports, and reaction to them.

This is the daily Politics Briefing newsletter, written by Ian Bailey. It is available exclusively to our digital subscribers. If you’re reading this on the web, subscribers can sign up for the Politics newsletter and more than 20 others on our newsletter signup page. Have any feedback? Let us know what you think.

HOCKEY CANADA FELL SHORT ON DEALING WITH SEXUAL-ASSAULT PROBLEMS: FORMER CEO – Hockey Canada has not gone far enough in the past to address problems related to sexual assault, including conduct by players and a culture of silence within the sport, former chief executive officer Bob Nicholson told parliamentary hearings in Ottawa on Tuesday. Story here.

FIRST COURT APPEARANCE OF HYDRO-QUEBEC EMPLOYEE ACCUSED OF ESPIONAGE – A Montreal-area Hydro-Québec employee charged with economic espionage has made a first court appearance since he was accused of sending trade secrets to China. Story here.

BANK OF CANADA FACING FIRST FINANCIAL LOSS – The Bank of Canada will report its first financial loss in its 87-year history in the coming weeks, a development that risks further denting the central bank’s reputation and inviting more political scrutiny over its purchases of government bonds during the COVID-19 pandemic. Story here.

CBSA MISSES ARRIVECAN DEADLINE – The Canada Border Services Agency has missed a committee-ordered deadline to hand over outsourcing invoices related to the ArriveCan app, and the agency president told MPs Monday that she couldn’t provide a timeline for handing over the documents. Story here.

HINSHAW REPLACED – Premier Danielle Smith is replacing Deena Hinshaw as Alberta’s chief medical officer of health ahead of significant changes she says are coming this week to the province’s health care system and its leadership. Story here.

OTTAWA COMMITS TO $800-MILLION IN CLEAN-FUEL PROJECTS – The federal government has rolled out $800-million for clean fuel projects, the first round of cash from a $1.5-billion fund launched by Ottawa in 2021 to help accelerate Canada’s plan to reduce greenhouse gas emissions in the fight against climate change. Story here.

TODAY IN THE COMMONS – Projected Order of Business at the House of Commons, Nov. 15, accessible here.

Also, the Standing Committee on Canadian Heritage will look at Safe Sport in Canada, with witnesses including Hockey Canada senior vice-president Pat Mclaughlin. Details here. Senior Writer Grant Robertson provided a preview here of the hearings. Also, the Special Committee on the Canada-People’s Republic of China Relationship will be hearing witnesses on the Canada-People’s Republic of China Relations. Details here.

Prime Minister Justin Trudeau, in Bali, Indonesia, for the G20 summit, attended the official welcome by Indonesian President Joko Widodo, participated in the G20 Working Session I on food and energy security, attended the G20 Leaders’ luncheon, and participated in the G20 Working Session II on health. The Prime Minister was also scheduled to attend the Partnership for Global Infrastructure and Investment event, and the G20 Leaders’ dinner.

Bloc Québécois Leader Yves-François Blanchet was scheduled to hold a media scrum in the foyer of the House of Commons, joined by the party’s human rights critic, Alexis Brunelle-Duceppe, as well as Mehmet Tohti, executive director of the Uyghur Rights Project, and Kayum Masimov, a Uyghur interpreter for the project.

No schedules released for other party leaders.

On Tuesday’s edition of The Globe and Mail podcast, senior international correspondent Mark MacKinnon talks about the Ukrainian city of Kherson. The city has been under Russian occupation since March, but Ukraine has regained control. The Decibel is here.

The Globe and Mail Editorial Board on whether we need a few weeks of mandatory masking to slow the spread of childhood respiratory viruses: “Lowering the pace of the spread of COVID-19, flu and RSV among children would ease the strain on the health care system. But a mask mandate, even one lasting only a few weeks, could impose real burdens on businesses and students. Instead, Ontarians – especially those in contact with small children or the aged, or working or living in confined spaces – are being asked, but not told, to mask. And everyone is being reminded to get their flu shots and COVID boosters. Is that enough? Is it the right trade-off? One of the difficulties in answering those questions is the dearth of data. It’s one more reason to mourn the loss of Ontario’s Science Table, which for more than two years crunched numbers and provided models that allowed governments and the public to appreciate those trade-offs with regard to COVID-19.”

Marsha Lederman (The Globe and Mail) on how it’s the time of year to get the masks out: “We need to normalize wearing masks, as is the practice in parts of Asia. Not just as a pandemic measure. Not all the time; not all year, even. But at this time of year, what used to be called cold-and-flu season, when we typically see increases in respiratory viruses – including COVID – masks need to return to our lives annually, brought back out along with the puffy coats, hats and mitts. The escalation in infections is predictable; with COVID, it has happened for three years now. So think of this as part of the winter wardrobe switch. You pack away the sandals, lug out the snow tires, and restock your household mask supply. There has to be a cultural shift in how we view the practice, at least for now. We should be wearing masks, at certain times and in certain situations – especially crowded indoor public spaces – to protect the population and the system. Masks should be a must if you have a cough or sniffle and need to leave the house.”

John H. Cochrame and Jon Hartley (Contributed to The Globe and Mail) on the most important source of Canada’s inflation being the $700-billion borrowed by the government: “The most important source of Canada’s inflation is simple: Starting in 2020, the government borrowed more than $700-billion, and mostly handed it out. People spent it, driving up prices. It was, of course, proper for the government to help people and businesses gravely hurt during the COVID-19 pandemic. And debts and deficits do not automatically cause inflation – Canada can borrow an immense amount without an impact on the price level if the government has a believable plan for repayment. But the government had gone too far in borrowing and spending, without such a plan. People try to get rid of public debt, pushing up prices until its real value is back to what people think the government will repay.”

Murray Mandryk (Saskatoon StarPhoenix) on how Saskatchewan `abortion’ T-shirt flap is about rights, not words: “It was a move that likely avoided the Saskatchewan legislature’s third nationally embarrassing incident in less than three weeks of this fall sitting.Credit Policing Minister Christine Tell for her sagacious view that “we just need to lighten up a bit” after last Wednesday’s nonsense in which legislative security ordered advocate Megan Johnston to remove her “Abortion is Health Care” T-shirt. Perhaps it was more of a collective decision by the Saskatchewan Party government that realized it could ill afford to take another public battering. The Sask. Party government surely needed a win after inviting — and initially justifying said invitation — convicted murdered Colin Thatcher to the speech from the throne.Then there was the clumsy justifications from Education Minister Dustin Duncan who stubbornly refused to order the removal of textbooks from some private Christian schools that teach kids the Loch Ness monster is proof man co-existed with dinosaurs.”

Michael Wernick (Policy Options) on leaving the comfort zone: Difficult issues in public-sector reform: “What follows is a brief thought experiment. If the federal government took the advice – something that is unlikely in my view – to create some sort of royal commission or advisory panel on its public service, what are some of the more difficult or “wicked” questions – that would surface? We do not have to wait; we can start debating these issues now. There are more, but I set out just a few of the most uncomfortable ones here.”

Got a news tip that you’d like us to look into? E-mail us at tips@globeandmail.com. Need to share documents securely? Reach out via SecureDrop.