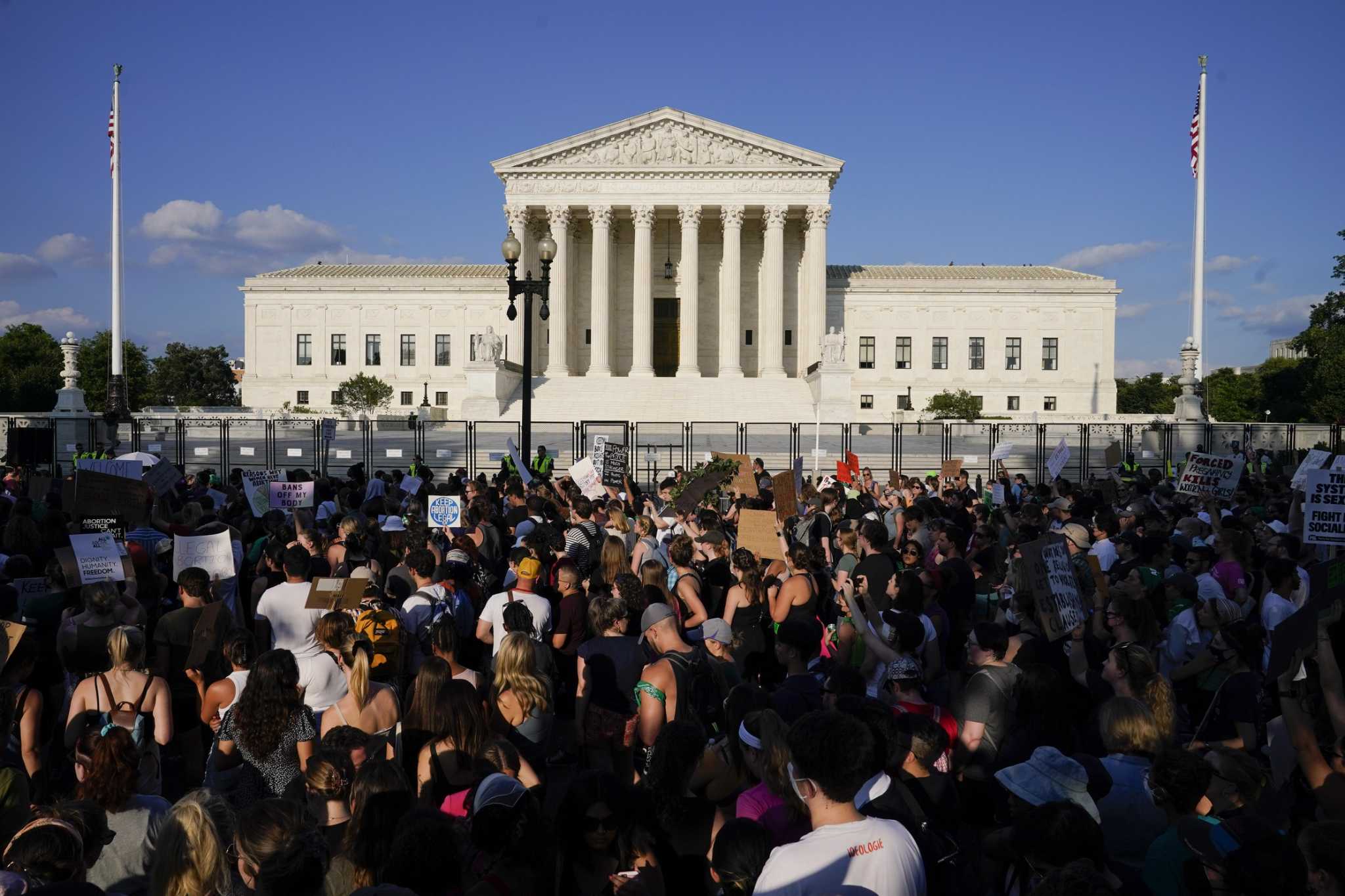 Now that the Supreme Court has overturned Roe v. Wade, only Congress has the immediate power to restore a nationwide right to abortion. But it’s not clear whether the court that struck down abortion rights would allow a federal law.

It’s not a unanimous view. UC Berkeley Law School Dean Erwin Chemerinsky, who has argued cases before the Supreme Court, said its past rulings on health issues, particularly the 2012 decision upholding most of the federal health care law, probably wouldn’t weaken the legal case for abortion rights. Another legal expert, Harvard Law professor Laurence Tribe, said a bill could be drafted — and he’d be willing to help — that should survive in court.

But the debate indicates that politics is not the only obstacle to reinstatement of nationwide access to abortion that the court declared in 1973 and revoked in a 6-3 ruling June 24 — arguably the first time in modern history that the justices repealed an individual constitutional right that an earlier court had granted.

The ruling left the issue up to each state. California law allows abortion up to the point of fetal viability, or later if the woman’s life or health is in danger, and on Nov. 8 two-thirds of the state’s voters approved Proposition 1, adding abortion rights to the state Constitution. But at least half the states are likely to ban or severely restrict access to abortion, according to the Guttmacher Institute, a research group that supports abortion rights. Some of those laws are being challenged in state courts, but the Supreme Court has removed any obstacles to them under the U.S. Constitution.

President Biden, who once opposed abortion, now says he would sign a federal abortion-rights law but believes there are not enough votes to pass it in the current Congress. It will almost certainly be off the table once Republicans take control of the House in January. But even in a future Congress more sympathetic to reproductive rights, the final decision would most likely be made by the same court that found Roe v. Wade “egregiously wrong,” in the words of Justice Samuel Alito, author of the majority opinion.

A central legal issue is one the court addressed in 2012, when a 5-4 majority led by Chief Justice John Roberts unexpectedly upheld much of the Affordable Care Act, the 2010 law sponsored by President Barack Obama to provide health insurance to more than 30 million Americans.

One provision of the law required the uninsured to buy insurance coverage, with the help of federal subsidies for those of low or moderate incomes, or pay a penalty on their tax bills. Government lawyers argued that Congress had the power to mandate insurance under its constitutional authority to regulate interstate commerce, but a majority of the court — including Roberts — disagreed. Roberts salvaged the law, however, by reinterpreting the financial penalty as a tax, which Congress has the power to levy, although he and his colleagues struck down the law’s requirement that states expand Medicaid eligibility for the poor. Eleven states have refused to adopt the Medicaid expansion, which is largely funded by the federal government.

Mystal, in his Nov. 15 article for The Nation, said a federal abortion-rights law would raise the same issue — whether it was authorized by Congress’ power to regulate interstate commerce — and would likely get the same negative answer from a court that is more conservative than it was in 2012.

“At the beating heart of (the 2012 ruling) is a shocking denial of congressional authority to regulate the standard of health care that must be provided in the various states,” Mystal wrote.

He said the current court demonstrated its attitude in a 6-3 ruling in January that struck down Biden’s mandate that large private employers require their workers to be vaccinated against COVID-19 or undergo weekly testing and wear masks at work, and in decisions last year rejecting the administration’s attempts to ban evictions of renters in areas hard-hit by the pandemic. While those rulings found a lack of executive authority, Mystal said, they also showed a court majority with little regard for the power of any branch of government, including Congress, to protect Americans’ health and well-being over state opposition.

His legal assessment was endorsed by Wendy Parmet, a professor of law and public policy at Northeastern University in Boston. “There is great reason to think that the Supreme Court majority will strike such a law, even if it is drawn narrowly and carefully,” she told The Chronicle.

But UC Berkeley’s Chemerinsky said abortion, under current legal standards, is more likely to be considered something Congress can regulate than an individual’s failure to buy insurance, the disputed issue in 2012.

“Abortions are economic activity (they are often paid for) and taken cumulatively they have a substantial effect on interstate commerce,” Chemerinsky said. Under the court’s past precedents, he said, “Congress could pass a law creating a national right to abortion or prohibiting abortions everywhere.”

Harvard’s Tribe, another longtime Supreme Court practitioner and commentator, said it’s a close question but one that tips in favor of congressional authority to legalize abortion over state objections.

The rationale of Roberts and his fellow justices in 2012, Tribe said, was that an individual’s failure or refusal to buy insurance was not interstate commerce, which Congress can regulate, but instead was an absence of commerce. However artificial that distinction might seem, he said, it would not apply to abortion, with all of its economic implications.

“The only way for the court to strike down a federal law regulating reproductive health care services from contraception through birth (or abortion) and pre-empting all state regulation to the contrary, including state bans on abortion beyond those permitted by Roe v. Wade, would be to cut back the Commerce Clause power of Congress across a vast swath of areas,” Tribe said.

“If it were properly drafted – and I’ll be working with those in the White House and Congress who draft it, for whatever that’s worth – I think there’s a better than even chance that it would be upheld.”

Meanwhile, another legal battle could lie ahead for legislation, passed by the House with bipartisan support and now awaiting a Senate vote, that would grant legal protection to same-sex marriages. It would not require states to legalize those marriages, but would oblige them to recognize marriages legally performed in other states, and would guarantee federal benefits to the couples, including joint tax filings and Social Security survivors’ payments.

The Supreme Court, in the case of Obergefell v. Hodges, declared a constitutional right in 2015 to marry one’s chosen partner, regardless of gender. But in a concurring opinion in the recent abortion ruling, Justice Clarence Thomas said it was time to reconsider the marriage decision, along with earlier rulings on the rights to contraception and the right of sexual relations for same-sex couples — all based on concepts of personal privacy and autonomy.

Tribe told The Chronicle that a congressional attempt to restore the right of same-sex marriage, if the Supreme Court reversed its 2015 ruling, might stand on shakier ground than abortion-rights legislation. It would be difficult to justify a marital-rights law as regulation of commerce, he said, so its defenders probably would have to rely on the constitutional guarantee of equal protection of the laws or the obligations of each state to respect other states’ laws, overseen by a skeptical Supreme Court.

On the other hand, Tribe said, “an overruling of Obergefell, given the firestorm generated by the overruling of Roe, now seems less likely than it would’ve been without that firestorm. But Obergefell remains at risk, so the difficulty of getting the court to uphold its codification becomes a source of genuine concern.”