It’s 6:30 a.m. and your third alarm is blaring. Another 10 minutes and you’ll have to miss breakfast before going to work. You get up, brush your teeth, shower and start a pot of coffee while watching the morning news. After the station’s meteorologist tells you it’s sunny with a high of 70 degrees, a health reporter follows up with the COVID-19 forecast: red-alert level today, with a 75 percent chance of exposure in spaces with at least 50 people.

You respond to the risk by taking a rapid test before leaving the house — snapping a picture of the negative result for your colleagues — and grabbing your N95 mask.

This is a hypothetical future, but one that a new team at the Centers for Disease Control and Prevention is working on. The Center for Forecasting and Outbreak Analytics got an initial $200 million in funding from the American Rescue Plan to recruit data scientists, epidemiologists and science communicators who will come up with forecasts for the public and promote data-based decision-making. CFA aims to operate “like the National Weather Service, but for infectious diseases,” said epidemiologist Caitlin Rivers, the new center’s associate director for science, in an April article in The Washington Post.

Which would be great — except that the forecasts have less data to work with now than they’ve had in years. COVID-19 case data is less and less reliable thanks to rapid testing, for one. In addition, hospitalization data can lag behind trends in transmission and may become unavailable in the coming months. And new sources like wastewater surveillance aren’t yet ready to replace clinical data. Imagine producing a weather forecast without reliable temperature or humidity measurements.

About six times as many at-home tests as PCR tests are being taken in the U.S., according to Mara Aspinall, a diagnostic-testing expert and health-care industry consultant. Using data from test manufacturers and retailers, Aspinall has kept a close eye on test capacity in the U.S. throughout the pandemic, and at this time last year, Americans were taking considerably more PCR tests than at-home tests.

Unlike PCR test results, which are automatically reported by the labs that process the tests, the vast majority of at-home test results are not reported to public-health authorities. In recent months, PCR tests have also become less available. States such as Vermont and Colorado are shutting down free public-testing sites and directing patients to at-home tests and private health-care providers instead — even as government funding to cover tests for uninsured people has run out. 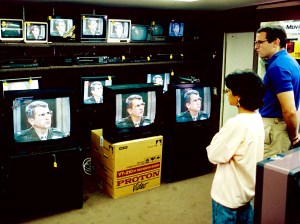 How To Host A Congressional Hearing That Actually, Like, Does Something

“The official numbers we hear about on a daily basis, in terms of official COVID-19 cases, is becoming an increased undercount of the true number of infections that are circulating,” said Jason Salemi, an epidemiologist at the University of South Florida College of Public Health.

This increasing undercount leads to more uncertainty in COVID-19 forecasting, said Marc Lipsitch, an infectious-disease expert at Harvard and the temporary director of science at CFA. As the quality of case data gets worse, “we’re more reliant on the delayed indicators, like hospitalizations and deaths,” he said.

CFA scientists are currently focused on hospitalization data, which U.S. modelers find more reliable than case numbers: Lipsitch described it as the best source that is “routinely and uniformly reported.”

Hospital admissions — the number of COVID-19 patients newly admitted for treatment — can be particularly useful, said Lauren Ancel Meyers, director of the University of Texas at Austin’s COVID-19 Modeling Consortium. This metric provides “a stabler signal” than case counts, even though it doesn’t typically show an increase until a week or two after a surge.

But when health agencies rely on hospitalization data as their main source for policy decisions, they “lose valuable time to prevent morbidity and mortality,” Salemi said. Essentially, by the time hospital admissions show a meaningful uptick, it’s already too late to prevent a surge that will cause more people to get seriously ill — and it will drive similar increases in long COVID that aren’t visible in hospitalization data at all.

Lipsitch agreed that this delay is a problem. Hospitalization data reflects COVID-19 spread in the recent past; when using data about the past to identify trends in the present, “the present becomes more ambiguous, because the most timely signal was also the lowest quality.”

In addition, Salemi said, hospitalization metrics face a problem of geography. While people living in every U.S. county may get infected with SARS-CoV-2, not every county has a hospital. For example, Alachua County, Florida, has a major health-care system where Floridians from several smaller, nearby counties go for treatment. Most of the hospitalizations from this region show up in Alachua County, not in the surrounding areas.

Even the imperfect hospitalization data may not always be available. When the Biden administration ends the national public-health emergency for COVID-19, hospitals and local health departments may no longer be required to report their data to federal agencies. The emergency declaration will continue beyond at least July 15, but it’s unclear how long the administration will keep extending it.

And if the data does become even less reliable, then what? CFA is looking into alternatives, and wastewater monitoring is a top priority. Our sewers can provide more timely data than hospitalizations, and less biased data than cases. But wastewater is far from a national surveillance system: COVID-19 levels aren’t being tracked in water systems for much of the country, it takes time and resources to set up this tracking, and health agencies aren’t yet sure how to use the data once they do have it.

Lipsitch also wants to find a way to pinpoint who in a community is infected, with data that’s individual-level, not population-level like wastewater. Ideally, he would like to see the CDC perform population surveys, sampling a representative subset of Americans to estimate who has COVID-19. Such surveys could contribute to precise estimates of how many people in a given state or county are currently infected, driving forecasts of an individual’s chance at exposure if they go to work or school. British modelers consider similar surveys conducted by the U.K.’s Office for National Statistics much more reliable than case counts, Lipsitch said. But there’s no comparison for these surveys in the U.S.

CFA’s conversations about potential data sources and public-health actions are largely theoretical at this point, as the center is still a team of only four people — three of whom are “on loan” from their academic positions, as Lipsitch described it. Posting job descriptions for the center’s eventual 100 scientists and communicators is “taking longer than we had hoped,” he said. As of early June, only one job posting is open for applications.

As it works on scaling up, CFA faces a broader challenge: the CDC’s lack of authority over state and local health agencies. “Outside of a public-health emergency, CDC has no authority to require states to share data,” Lipsitch said. And even during the COVID-19 emergency, the agency has been unable to require sharing some key metrics, such as breakthrough cases and deaths.

The CDC also has limited authority over Americans overall, and trust in the public-health system is waning. One recent poll showed that nearly one-third of the country thinks the pandemic is already over, while Congress consistently fails to deliver new funding for COVID-safety measures. These may be concerning signals for the new forecasting center’s future: Even if the CFA is able to provide timely, accurate infectious-disease forecasts like what we have for the weather, how many people will actually act on the information?