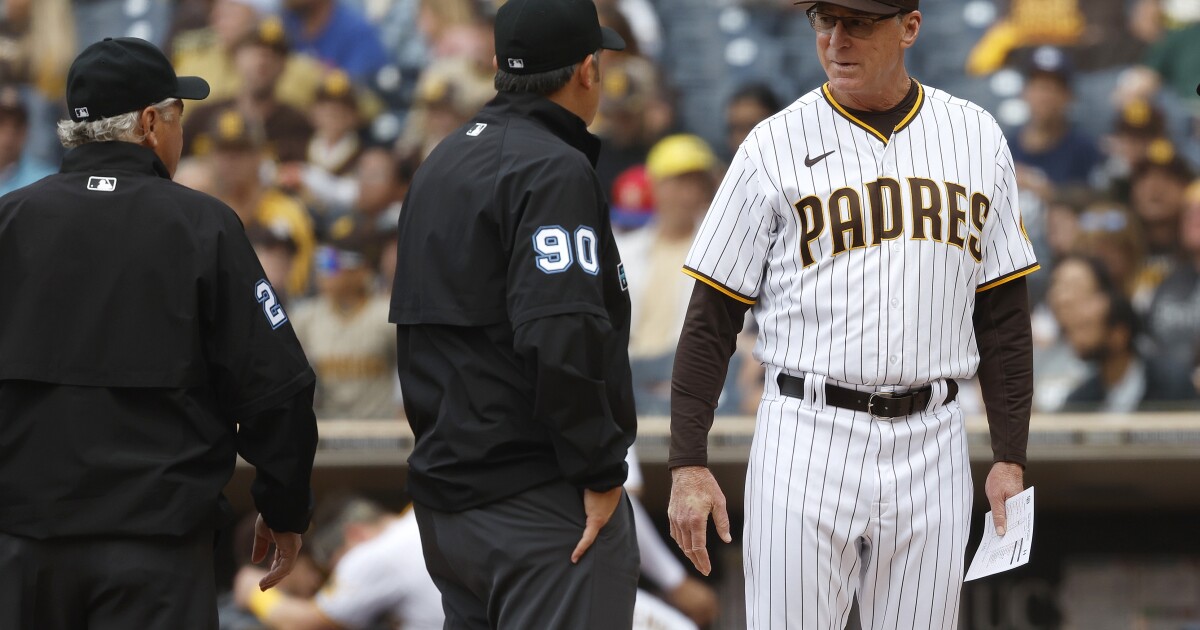 Because Mike Clevinger had been under the weather, the Padres had mapped out their roster moves in advance of Saturday’s doubleheader: Clevinger and Adrián Morejón hit the COVID injured list, Nick Martinez and Blake Snell moved up a day in the short-term, seven-man rotation and Reiss Knehr and Ray Kerr joined the team from Triple-A El Paso to cover the bullpen.

The rotation beyond this weekend: Yu Darvish will open the series in Chicago and …

“Then we’ll see where we are with Clev after that,” Padres manager Bob Melvin said. “I’m just not sure how long that’s going to take.”

Nor can he be sure when he’ll be around now either.

Hours after a 2-1 win in the matinee, Melvin and bench coach Ryan Christenson joined Clevinger and Morejón in COVID protocols, forcing quality control coach Ryan Flaherty to serve as the acting manager for Game 2.

Christenson also missed a game for testing after a close contact last month and third base coach Matt Williams missed four games after a positive test. Melvin, Christenson, Clevinger and Morejón entering the protocols on Saturday is the latest blow to an organization currently dealing with COVID up and down the system.

Double-A San Antonio had canceled games on June 4 and June 5 after a number of positive tests among players and coaches. Morejón had been with the Missions then, but he did not test positive and was not considered a close contact. He’d been promoted to Triple-A El Paso on Monday but reported instead to San Diego on Tuesday to make his 2022 debut.

El Paso manager Jared Sandberg returned to the dugout on Friday after COVID protocols forced him to miss 10 games, while top prospect Robert Hassell III was activated Saturday after hitting the COVID list on May 29 during an outbreak at high Single-A Fort Wayne.

Symptoms across the system have largely been mild, but they’ve forced the organization to scramble to fill rosters via trades for players like Ike Freeman (San Antonio) and signings of players like Kyle Martin (El Paso).

Seven deep before Clevinger hit the COVID list, the rotation was at least in a good spot heading into Saturday.

Steven Wilson threw three shutout innings on Monday, his longest outing since his senior year at Santa Clara in 2018. He struck out two in a scoreless inning Friday, another batter in the 10th inning of Game 1 on Saturday and would have started the 11th inning had Manny Machado not scored the winning run on a walk-off error.

That is where Melvin’s trust is in Wilson following last month’s rough patch.

“Early in the season we closed a game with him,” Melvin said. “We’ve used him in the eighth. The stuff’s there. For young pitchers, sometimes you go back and forth with your confidence and then you have to find it again.”

And sometimes it’s a tweak or two that helps, as has been the case with Wilson, who’d seen his ERA rise from 1.08 on April 26 to 5.09 on May 30 after giving up three runs in two-thirds of an inning in St. Louis.

For starters, he’s standing taller now after beginning to lean forward a little too much. He’s also throwing a new slider, same motion but with a two-seam grip, a change that Wilson says is producing almost double the horizontal movement.

Conversations with closer Taylor Rogers and pitching coach Ruben Niebla prompted the change. Yadier Molina doubled off that slider in that game in St. Louis — the second time he’d used it. All but two of his pitches Saturday afternoon were that new and improved slider.

Connor Joe looked at two of them before striking out to start the 10th with the runner on second base. Charlie Blackmon rolled over a first-pitch fastball for the second out and C.J. Cron popped up a slider to end the inning.

“It was just talking to a bunch of guys who have good sliders and their thought-processes and going on the slo-mo cam and just getting the spin how we wanted it to look,” Wilson said. “It’s been a good pitch for me ever since. … I was just starting to feel comfortable with it (in St. Louis). It wasn’t as sharp as it is now. We’re just getting comfortable with it now, throwing it for strikes and throwing it where I want.”