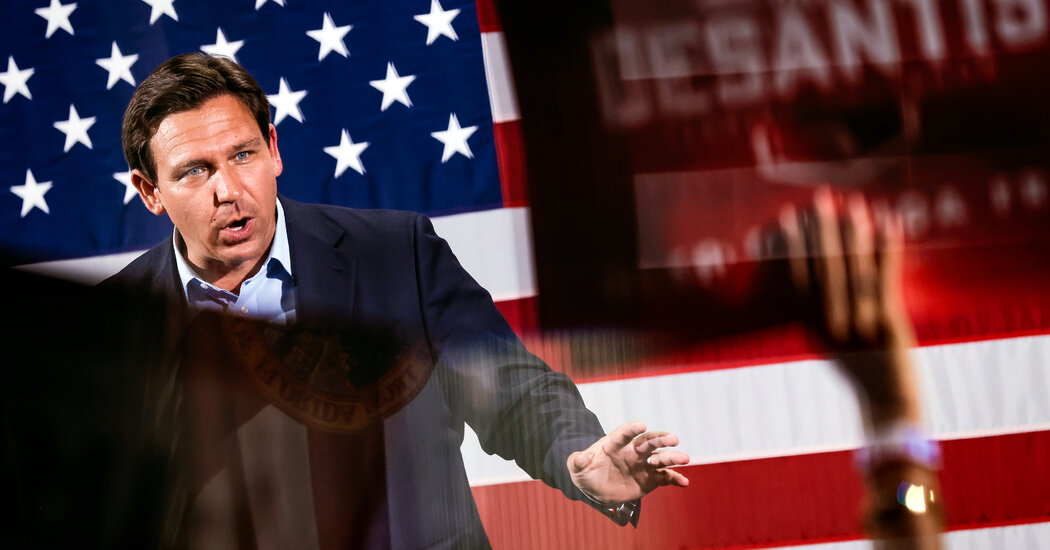 Here’s a question: What does Gov. Ron DeSantis of Florida think about Medicare? Medicaid? Social Security? The Affordable Care Act?

DeSantis has built his national political image on well-timed and strategically chosen battles. First it was opposition to Covid mitigation strategies and vaccine mandates. Then it was open hostility toward L.G.B. (and especially) T. Floridians and anything and anyone deemed woke. Now it is an escalation of both moves, aimed at seizing the right flank in the Republican presidential contest, which has already begun to move away from behind-the-scenes jockeying to open competition between rivals.

DeSantis says he wants to ban vaccine mandates and restrict mask rules and make Florida a safe haven from what he calls a “biomedical security state.” He also wants state universities to provide the number and ages of students who have sought or received treatment for gender dysphoria, which critics argue is the governor’s first step toward banning those services. And his Department of Education has already rejected an Advanced Placement pilot course covering African American studies on the grounds that it is a tool for political indoctrination. “As submitted, the course is a vehicle for a political agenda and leaves large, ambiguous gaps that can be filled with additional ideological material, which we will not allow,” Bryan Griffin, DeSantis’s press secretary, said.

By no means is any of this trivial or unimportant. Florida is the third-most-populous state. To launch a war on vaccines or use state power to harass transgender students is to make life difficult, even dangerous, for thousands of people.

And yet there is a reason DeSantis has made these issues, and virtually nothing else, the platform from which he hopes to build national power. By leaning into high-profile battles as a culture warrior par excellence for the most reactionary segment of the American public — last year, to give another example, he picked a fight with the Disney corporation — DeSantis has made himself the hero of conservative elites and the bête noire of liberals and Democrats without so much as mentioning his radical and unpopular views on social insurance and the welfare state.

As a congressman, serving three terms from 2013 to 2018 (when he ran for governor), DeSantis was one of the founders of the House Freedom Caucus, the most hard-line and conservative faction in the House Republican conference, now in the spotlight because of its leadership battle with Speaker Kevin McCarthy and its driving role in using the debt ceiling to force spending cuts on an unsuspecting public.

DeSantis was an especially fierce opponent of so-called entitlements and other forms of federal aid. He helped lead the effort to shut down the government over funding for the Affordable Care Act in 2013 and the same year voted to pass a budget resolution that would have cut more than $250 billion from Social Security and Medicare over a decade. In 2017, like most other Republicans, he voted to repeal the Affordable Care Act and to cut taxes on corporations, high earners and wealthy heirs.

DeSantis believes, according to his 2011 book, “Dreams From Our Founding Fathers: First Principles in the Age of Obama,” that the framers of the Constitution “strived to construct a system of government that prevented government-mandated wealth redistribution.” Turning his attention to the Affordable Care Act and the federal bureaucracy, DeSantis condemns both as “administrative despotism” that have exerted “stifling constraints on the whole of society.” And while he doesn’t take direct aim at the New Deal and its offspring — the whole book is framed as an attack on the Obama administration — his arguments against redistributive policy should apply as much to Social Security as they do to Obamacare. It is not for nothing that Florida is one of 11 states that has not adopted the Medicaid expansion.

Yes, as governor of Florida, DeSantis has eagerly used a windfall of Covid relief funds to strengthen his political position in the state, with bonuses for emergency medical workers and new money for environmental protection. But that does not mean he has changed his thinking on these larger questions of federal spending.

The upshot of all this is that DeSantis’s opponents should, as much as possible, refuse to play his game. You don’t have to confront him on his terrain. You could instead force him to acknowledge or account for his other, more unpopular political commitments. Interestingly, this is the approach that Donald Trump might take to rebuff DeSantis in a Republican primary contest. “One area in which Trump and his allies smell that kind of weakness in DeSantis is on Social Security,” Rolling Stone reports. Trump, it should be said, used this strategy to great success against his Republican opponents in 2016.

It might be too much to ask liberals and Democrats to take a lesson from the former president, but here they should. The best way to neutralize DeSantis as a political force might be to spend less time on cultural conflict and more time making the clear case that if given the chance, he would slash what’s left of the safety net and use the proceeds to help the rich stay rich.