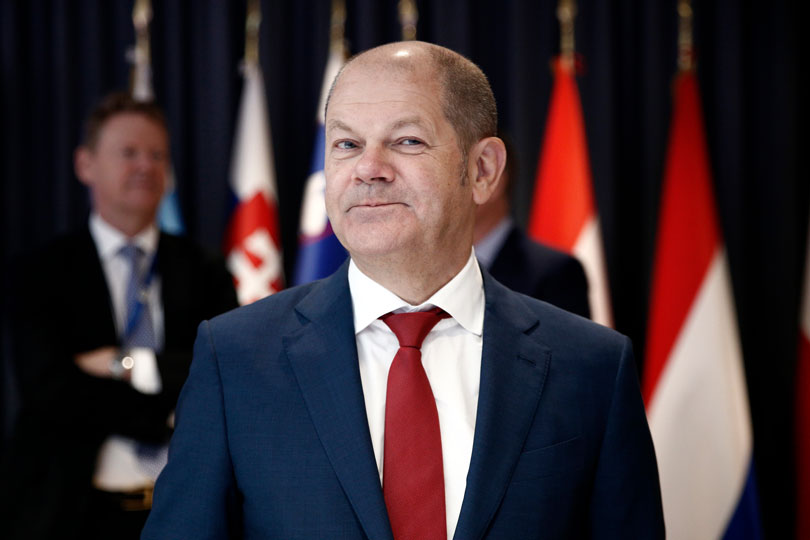 Compared to the rest of Western Europe, German politics may often appear static and slow-paced: The country has seen only four Chancellors since Helmut Kohl dethroned Helmut Schmidt in 1982, with Kohl and, more recently, Angela Merkel governing for a record 16 years each. For this reason alone, Olaf Scholz clinching the chancellorship after the 2021 federal election marked a considerable caesura in federal politics, even more so as the former vice-chancellor and Mayor of Hamburg had entered the race for the Bundeskanzleramt as a clear underdog. With the CDU easily dominating the polls and the Greens claiming hegemony over the centre-left, Scholz gave, for most of his campaign, the appearance of the proverbial sacrificial lamb marching to its unavoidable slaughter. Against this backdrop, his late surge and narrow win must be considered among the biggest political comeback stories in German history. (Gerhard Schröder came close to stage something similar in 2005 but ultimately lost to the then still obscure Merkel by a single percentage point.)

When he announced his intention to form a traffic light coalition consisting of his SPD, the Greens, and the liberal FDP (usually the junior partner in CDU-led coalitions) a few days later, Scholz also entered uncharted territory in terms of party politics—never before had a Chancellor relied on an alliance of similar ideological and habitual diversity. Yet, forging it came at the price of his SPD relinquishing several key cabinet posts, with the Green lead candidate Annalena Baerbock becoming Minister of Foreign Affairs, her co-chairman Robert Habeck Minister of the Economy, and the FDP’s leader Christian Lindner Minister of Finance. Two of these three top positions had been in Social Democratic hands for most of the last twenty years, which both junior partners interpreted as a sign that the Schröderian notion of the chef and the waiter (the larger party decides, the smaller ones follow suit) would now finally be obsolete. An interpretation to which Scholz himself agreed: “[This is] a coalition on an equal footing, in which all three partners leverage their strengths to the benefit of our country”, he declared during a press conference in late November.

Yet a little more than one year later, these good intentions have largely vanished, as has the almost Whitmanian mood of curious excitement that accompanied the new coalition’s first weeks. On the one hand, Scholz’s efforts to brand himself as a male Merkel, a pair of safe hands who voters of a wide range of political persuasions could trust, fell on stony ground: His personal approval hovers around 50%, which may seem like a solid number but is a far cry from the 70% to 85% that Merkel enjoyed in her last year in office. (In addition to that, the SPD has again fallen below the 20% mark in most polls.) On the other hand, his promise of progressive reform and Aufbruch (departure) was dashed by the harsh realities of a world in turmoil—with the COVID-19 pandemic still lurking in the background, the Russo-Ukrainian war straining the German economy, and the coalition’s generous refugee policies threatening to once again deepen intra-European conflict lines. Not even to mention the record-high inflation rates and housing prices that worry consumers and make for an overall sombre national mood.

Indeed, to govern in times of disruption can be an ungrateful task, especially if one cannot properly tackle the difficulties but only contain some of their fallout. Still, the coalitionfailed to rise to the occasion several times, with Habeck falling from the public’s grace due to a series of policy mishaps and TV blunders (including an interview in which he gave the impression not to know what insolvency is), Lindner wrestling to balance the wishes of his fiscally conservative electorate with the spending plans of his centre-left coalition partners, and Scholz not radiating the calm and level-headedness that Merkel was respected for. Not that the traffic light parties were completely idle in terms of legislation: they passed a historic €100 bn Sondervermögen (military investment outside the regular budget), replaced the Schröderian Hartz IV scheme with a more generous Bürgergeld (basic income), raised the minimum wage to €12.00 per hour, and took the first steps toward Cannabis legalisation. Still, most of this pales against the challenges on the horizon or is discursively superseded by feelings of uncertainty and disorientation. The whole impression of the government is one of perpetual overload, and no policy proposal could ever provide a remedy here.

Only fuelling this overload are the evident differences between the Greens and the FDP. In theory, both parties aim at a similar electorate (the educated urban middle class), yet in practice, their ideo-cultural differences run deep. Despite their pragmatic turn, the Greens are still strongly influenced by progressive social movements, and many of their 118 Bundestag seats went to young candidates with ties to the climate movement; by contrast, the FDP had centred its campaign on the promise to safeguard Germany’s industrial competitiveness and prevent tax raises. It should thus not come as a surprise that both parties have repeatedly clashed over climate and energy policy thus far, with the Greens smartly outmanoeuvring Lindner at the European level and the FDP pressuring Habeck into extending the runtime of two nuclear power plants. The SPD provides no real guidance in this conflict for it suffers from its own ambiguities: While many of its voters harbour a dislike for the FDP and its “neoliberal” politics, Scholz—himself a former Minister of Finance—appears to get along well with his liberal Cabinet members. More than once did he use Lindner to foster policies that he knows would stir too much controversy within the progressive wing of his own party. And more than once did Lindner let himself being used to curb the influence of the Greens and appear as an equal partner in the red-green-yellow triumvirate.

This Lindner-Scholz liaison makes even more sense in view of the coalition’s structural imbalance at the party level, namely the fact that both the SPD and the FDP have a lot more to lose in case of a snap election: the former would likely fail to repeat its 2021 upset, thus losing the Chancellorship; and the latter does not have any two-party options, making a CDU-FDP-Green Jamaica coalition their only real alternative to the status quo. The Greens, by contrast, are basically guaranteed to be part of any post-Scholz arrangement (with the exception of another grand coalition redux), at least if they continue to poll around 20 percent. Perhaps they already contemplate what price to demand if Scholz’s government breaks apart before 2025; there is little doubt that the CDU’s new chairman Friedrich Merz would more than happily pay it.

Apropos Merz, given the difficult circumstances that surrounded his election and the concerns that he would cling to outdated tactics from the 1990s and 2000s, he had a quite successful stint so far. Not only did the Christian Democrats recover in the polls and win key state elections in Schleswig-Holstein and North Rhine-Westphalia, forming black-green coalitions in both cases, but they also appear united for the first time in a long while. As predicted, Merz did not turn out an ideological hardliner either; rather, he appears to blend his predecessor’s careful modernisation approach with his trademark emphasis on economic liberalism and a distinctively statesman-like demeanour. His strategy in parliament—vigorously attacking the government over its lackluster crisis management while casting himself as a competent alternative—has been no less successful, putting the coalition under serious pressure and preventing its protagonists from monopolizing public attention.

In light of the many challenges ahead and a reinvigorated Merz waiting for his chance, the coalition should be particularly worried about the uninspiring performance of its cabinet members. Habeck, Baerbock and Lindner are untouchable for rather obvious reasons, but most of the others are not—and Scholz may be tempted to consider a reshuffle sooner rather than later. The Minister of Family Affairs, Anne Spiegel, already had to step down after lying about her whereabout during the 2021 Ahr valley flood. Also under fire is Minister of Defense Christine Lambrecht, who drew mockery for promising Ukraine 5,000 helmets, let her adult son accompany her in a military helicopter, and, most recently, caused raised eyebrows for posting a New Year’s Eve video clip in which she muses about the Russian invasion and how it led to “many encounters with great and interesting people”, with “loud fireworks blasting behind her”. Even Minister of Health Karl Lauterbach, once popular for advocating strict COVID-19 restrictions (“Germany’s Fauci”), appears increasingly erratic and may become a liability for the Chancellor the more the pandemic fades from the spotlight.

In any case, with the war in Ukraine entering its second year, the global economy possibly sliding into a recession, the rift between big spenders and budget hawks becoming more apparent, and the CDU recovering, the traffic light coalition is heading for a challenging 2023. Fate may have dealt it a difficult hand, but it does not look like an especially talented player either so far.