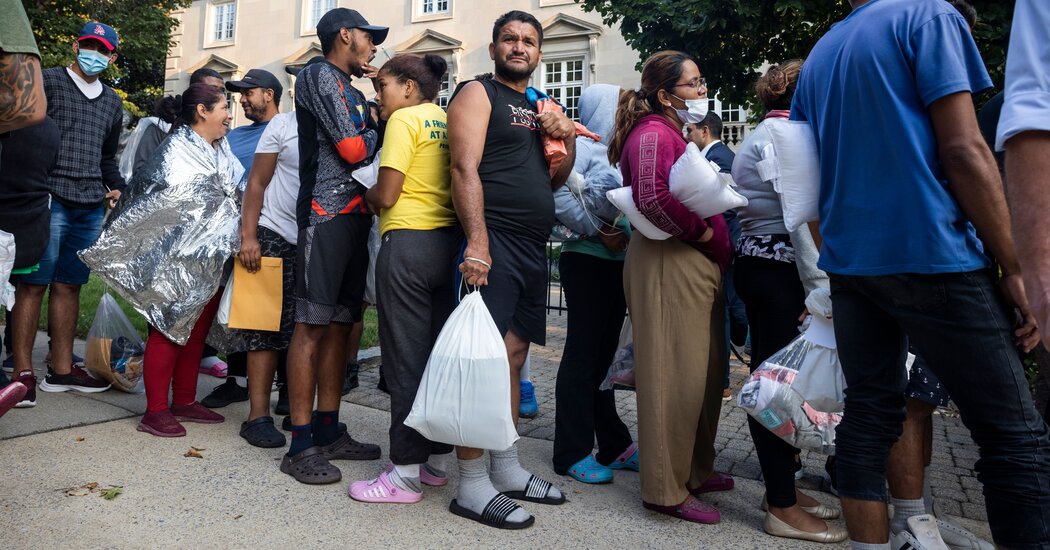 Since April, Gov. Greg Abbott of Texas has bused over 7,900 migrants from the state to Washington, D.C. In August, he began sending them to New York. Now, Gov. Ron DeSantis of Florida is getting in on the act, sending two planeloads of migrants to Martha’s Vineyard in Massachusetts. To hear Mr. Abbott tell it, he’s calling the bluff of blue-state mayors who claim to welcome undocumented immigrants. It’s also part of a not-so-secret Republican plan to whip up anger against Democrats ahead of the midterm elections.

Politics aside, one thing is clear: Our immigration system has long been overburdened and outdated, and the asylum process is a big part of what’s not working. The number of new asylum claims filed in U.S. immigration courts ballooned to 156,374 in 2022 — with four months left to go — from 32,895 in 2010. That’s partly because conflict and Covid created mass migration across the globe. Immigration courts have not been able to keep up with the surge of newcomers. In 2010, there was a backlog of about 100,000 asylum cases pending. Today, that number has swelled to more than 660,000. When other kinds of cases, such as deportation orders, are included, the backlog in immigration courts climbs to over 1.8 million.

The numbers reflect a recent spike in migration. Over the past two years, about a million people have been allowed into the country to await hearings in immigration court, according to a recent report by my Times colleague Eileen Sullivan. Each person has been given a year to file an asylum claim. That’s not just a Biden-era phenomenon: A similar number were admitted by the Trump administration during a 24-month period in 2018 and 2019, the last big surge in migration.

Combined, those numbers have broken the system. Although asylum hearings are supposed to be held within 45 days of an application being filed, the current wait times for an asylum hearing averages nearly four and a half years, according to researcher data compiled at Syracuse University’s TRAC center. The longer it takes to resolve a case, the harder it can be to remove people whose asylum claims have been denied, as has happened in over half of asylum cases last year. It’s projected that more than 745,000 deportation proceedings have been initiated in 2022, more than twice as many as in any other year with the exception of 2019. The long delays in resolving asylum cases have become a serious, self-perpetuating crisis: They incentivize people to file unfounded asylum claims, knowing that it will buy them years, even if they are eventually deported.

Part of the problem is that asylum is one of the few legal pathways economically desperate people can use to obtain permission to live and work in the United States. Under U.S. law and United Nations conventions established in the aftermath of World War II, people who express a “well-founded fear of being persecuted for reasons of race, religion, nationality, membership of a particular social group, or political opinion” are allowed to await the adjudication of their asylum cases inside the United States, where they can apply for authorization to work 150 days after filing for asylum. Employment Authorization Documents must be renewed every two years, creating another mountain of paperwork that the bureaucracy must keep up with.

Asylum seekers with genuine cases are among those most harmed by false claims, which greatly increase the time they must wait for legal protection.

The Trump administration tried a number of methods to discourage people from filing new asylum claims, including forcing some people to remain in Mexico while they applied for asylum in the United States. Nevertheless, asylum claims actually rose steeply under President Donald Trump, partly because of a surge in migration but also as a defense against his stepped-up effort to deport people.

The global outbreak of Covid-19 presented a new opportunity to cut down on asylum claims. Title 42, the pandemic-related public health policy that the Trump administration instituted in March of 2020, has allowed U.S. officials to quickly expel migrants at the border without granting them a chance to file an asylum claim. Many are pushed back to Mexico, exposing them to more danger. The Biden administration announced that it would reopen asylum processing at the border and seek to halt the use of Title 42, but more than 20 Republican attorneys general sued to keep Title 42 in place, even as some of them fought against other Covid prevention efforts, and insisted that the pandemic was being overblown. Thus far, the administration’s efforts to change the policy have been blocked by a federal judge.

Title 42 will eventually be lifted; at that point the country will rely on Title 8, the prepandemic authority under which U.S. agents can swiftly deport or fine people caught illegally entering the United States unless they are deemed eligible to claim asylum. This is fair; a well-run system must be empowered to quickly dismiss and remove people with unfounded claims, while connecting those with genuine cases to networks of social support. On this front, the Biden administration has not gotten the credit it deserves for an important, if underappreciated, rule change that could overhaul the system. This summer, trained asylum officers have been adjudicating some asylum claims at a handful of ICE detention facilities in Texas, relieving immigration courts. Asylum seekers who are denied can still appeal to a judge. The hope is that swift adjudications of new cases will prevent the backlog from growing and discourage false or meritless applications.

The new rule isn’t the welcome mat that many immigrants-rights activists wanted from the Biden administration after four years of President Trump. Nor is it the zero-tolerance treatment that many Republicans view as the only way to deter migrants from amassing at the border. But it is sound policy based on recommendations and extensive research by respected groups, including the nonpartisan Migration Policy Institute. In an age where nearly everything a president does on immigration attracts a lawsuit, it was carefully written to be as litigation-proof as possible. Combined with bipartisan efforts to increase the capacity to process noncitizens at the border in reception centers that have all the relevant departments and agencies under one roof, it could eventually transform a broken system into one that is far more efficient, modern and fair.

At a time when Americans are already at odds with one another over what we might call core values — the cultural beliefs that glue our country together — it’s reasonable to worry about whether adding newcomers to the mix will complicate the task of forging a common future. And yet this is also an issue that goes to the heart of who we are and whether we will continue to be a place where the world’s tired, poor, huddled masses can get a second chance. To be true to our identity as a pluralistic country, we need an asylum system that ensures that people who qualify for protection can get it — while minimizing the abuse of the system by those who are only trying to skip the line.