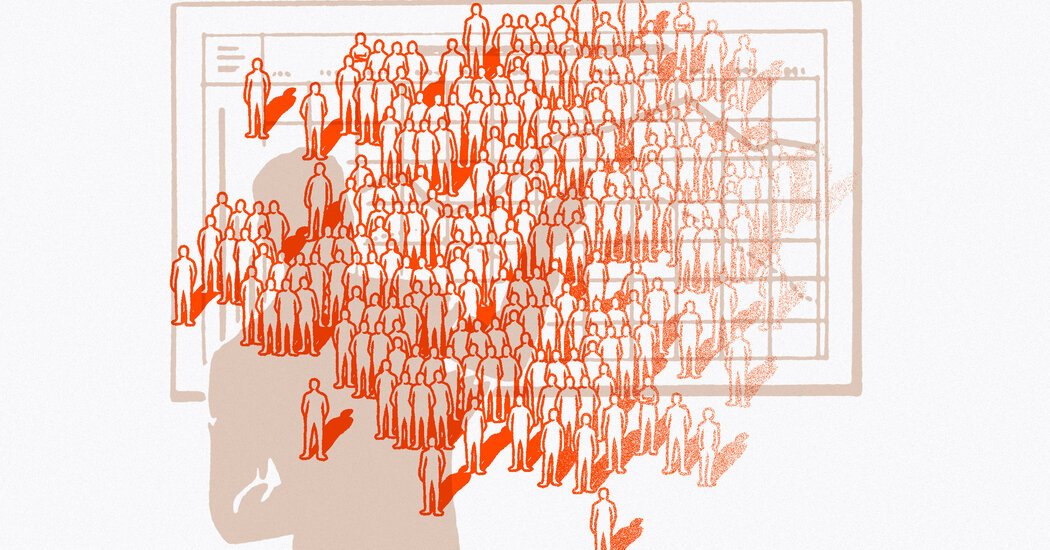 Attendance at the world’s biggest conference of economists was down by half this year, and that had some attendees worrying that the annual conclave was at risk of unraveling like a knitted sweater. People who were disappointed not to see their friends at this year’s Allied Social Science Associations conference in New Orleans would be less likely to attend next January’s conference in San Antonio, the theory went, leading to even lower attendance in San Francisco in 2025, and so on in a downward spiral with no obvious stopping point.

That would be bad. The annual three-day meeting is the Coachella of economics. It’s a be-in and a teach-in. In place of music, art and other earthly delights, there are PowerPoint presentations featuring innovations in econometrics. Nobel laureates rub shoulders with future ones. In any given time slot there might be 60 simultaneous sessions on how economics can fight climate change or reduce income inequality or help people save for retirement or rein in the tech giants. Here’s one I’m citing at random: Friday, 2:30 to 4:30, Bacchus Room, New Orleans Marriott: “Incentives for Efficient Household Electricity and Water Consumption.”

For economists, this is heaven itself. In a typical year the annual meeting of the Allied Social Science Associations used to draw around 13,000 of them, of which about 30 percent represented institutions outside the United States. The American Economic Association was and is the anchor organization. There are 64 other participating organizations, including the African Finance and Economics Association, the Association of Christian Economists, the Society for Benefit-Cost Analysis and the Union for Radical Political Economics.

Things felt different this month in New Orleans, where the allied associations held their first in-person conference since January 2020, which was right before Covid struck. Hotel and restaurant reservations were easier to get. The hallways were less crowded. Fewer sessions were standing room only. Attendance was a little over 6,000, according to Peter Rousseau, an economist at Vanderbilt University who is the secretary-treasurer of the American Economic Association. (Rousseau said he thinks the conference is still the world’s biggest; I can’t find any official ranking.)

The big factor depressing attendance this year was Covid, which had two effects, one temporary and one most likely permanent. The temporary way is that some people stayed away from New Orleans because they were sick with Covid or were worried about catching it.

The possibly permanent change is that during the two years the conference wasn’t held live, one of its important functions fell away. It used to be that about 1,500 Ph.D. candidates would attend to look for jobs and about 2,000 professors would come to interview them, in hotel suites. Now those initial interviews are happening online by video, and no one seems interested in going back to the old way, which was inconvenient for all and uncomfortable for many female candidates. (Another depressant this year is that some economists stayed away in protest of Louisiana’s abortion ban, which was triggered by the overturning of Roe v. Wade.)

The question people were asking one another in New Orleans is whether the event can survive without what for many was its reason for being: hiring. At the beginning of the weekend I was worried, but by the end I started to be reassured. Susan Athey, an economist at Stanford University’s Graduate School of Business and the president of the American Economic Association, told me she’s predicting that attendance next year in San Antonio will be slightly higher than it was in New Orleans, “based on the positive experiences people had being back in person and further improvements suggested by members for next year.”

Breadth and depth matter, the new president said. There are plenty of smaller, narrower economic conferences, but if you want to learn about topics outside your specialty or catch up with old colleagues who have gone in other directions, there’s nothing better than the annual A.S.S.A. meeting, said Athey, who is also chief economist of the antitrust division of the Department of Justice.

Daron Acemoglu, an economist at the Massachusetts Institute of Technology, told me he enjoyed this year’s meeting more than past ones because he was able to participate in more sessions instead of interviewing grad students all weekend. He said the current level of attendance might be more or less the new steady state. Justin Wolfers, a professor of public policy and economics at the University of Michigan, said the most important part of the conference is the serendipitous hallway conversations.

As a journalist covering economics, I hope the econ conclave continues to thrive. There’s no better source for story ideas.

Elsewhere: Workers and Jobs Are Matching Up

Last summer, the economists Olivier Blanchard, Alex Domash and Lawrence Summers put out a pessimistic paper on the U.S. job market. They concluded that it would take a big increase in the unemployment rate to bring down the number of vacancies — that is, unfilled jobs. That, they wrote, is because the market isn’t doing a good job of matching available workers with available jobs. But Simon Mongey, a senior research economist at the Federal Reserve Bank of Minneapolis, is more optimistic. He concludes that job-matching efficiency fell in the Covid recession because of dislocations in the labor market but has since recovered, so vacancies can decline without a big increase in unemployment.

Quote of the Day

“Those who work in an office often feel that, despite the proliferation of contrived metrics they must meet, their job lacks objective standards of the sort provided by, for example, a carpenter’s level, and that as a result there is something arbitrary in the dispensing of credit and blame.”

— Matthew B. Crawford, “Shop Class as Soulcraft: An Inquiry Into the Value of Work” (2009)

Have feedback? Send a note to coy-newsletter@nytimes.com.