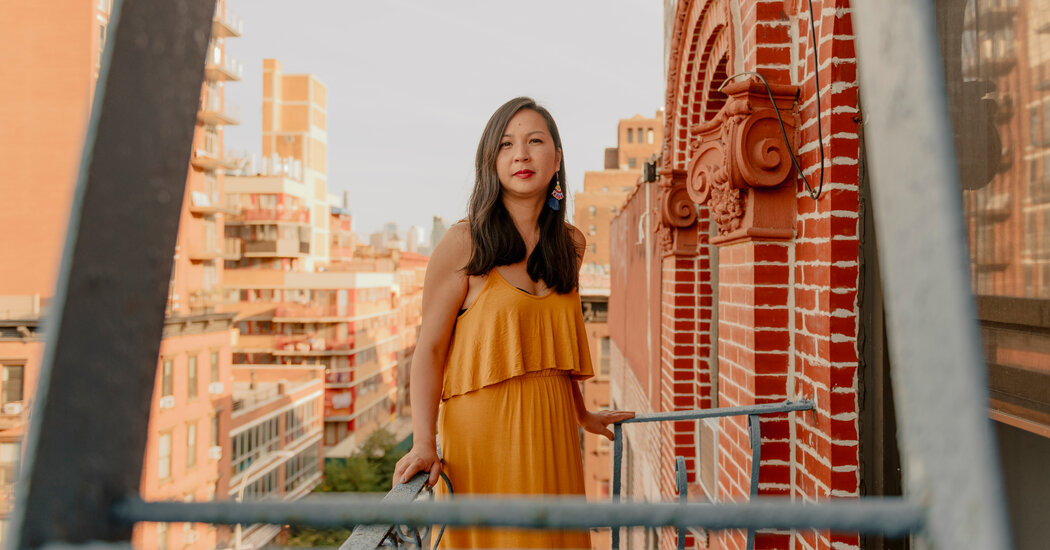 More than 40 percent of the available units in Manhattan currently come from tenants priced out of apartments they leased in 2020 and 2021, according to a new StreetEasy report.

For comfort at the beginning of the pandemic, Cathy Linh Che turned to cooking her mother’s Vietnamese recipes. She could easily find all the ingredients she needed in Manhattan’s Chinatown. But the subway ride from her Jackson Heights, Queens, apartment was almost an hour.

So when a modern, two-bedroom apartment with exposed brick walls and stone floors became available to rent for about $1,700 a month in the nearby Two Bridges neighborhood, she jumped at the opportunity. Ms. Che, an arts administrator, knew it was a little too good to be true, but she said the real estate agent assured her she was likely looking at a future rent increase of about 8 percent. She left her rent-stabilized apartment behind.

Then last May, her worst fears were realized: Her landlord handed her a renewal with a 65 percent rent hike. “I felt angry, I did feel misled,” she said.

What has long been bemoaned — that people who got what became known as the “Covid discount” are now paying the price for those deals — is now showing in the numbers.

About 44 percent of the available units in Manhattan currently come from tenants priced out of apartments they leased in 2020 and 2021, as landlords demand huge sums for those units, according to a new StreetEasy report released on Tuesday.

In the second quarter of this year, almost 14,000 Manhattan apartments became available because the former occupants were sent packing after they were handed renewals with significant increases. Citywide, the numbers are not much better with at least a third of available units — over 22,000 apartments — vacated because of rent hikes, according to the report.

The displacement of so many New Yorkers at once is having a ripple effect in neighborhoods around the city, pushing the rental market to the outer limits of affordability.

“The landlords are basically trying to recoup their lost income during the pandemic, and they are asking for rent increases more aggressively on the units that were offered” during that time, said the StreetEasy economist Kenny Lee.

Looking at repeat rentals, StreetEasy found that rents for apartments listed in 2020 and 2021 rose at four times the rate as those listed in 2018 and 2019. A tenant who signed a lease in the first two years of the pandemic would have seen their rent rise by over 20 percent, while someone who signed their initial lease earlier likely experienced a 4.5 percent increase.

The options are bleak for tenants priced out of their apartments, as they enter the most competitive rental market in a decade. Manhattan’s median asking rent soared to $4,100 in the second quarter, a record high for StreetEasy. In Queens, the median asking rent hit a record of $2,600 a month, a 13 percent jump from the previous quarter, and in Brooklyn, it hit $3,200, up 12 percent from the first quarter.

New York has long been an expensive city, with punishing rents. But housing advocates say this market is unlike any in recent memory.

Runaway rents are not only putting pressure on newcomers to the city, but also uprooting existing renters who did not plan to go apartment hunting this summer. Facing massive rent increases, some are doubling or tripling up with roommates, while others are moving to more affordable neighborhoods, fueling competition in areas like Queens, where the number of available apartments fell for the fifth consecutive quarter, to under 9,000, according to StreetEasy.

“This is leading to cascading deterioration in affordability in Queens and Brooklyn,” Mr. Lee said of the migration.

The Metropolitan Council on Housing, a tenants rights organization, has been flooded with calls from tenants whose rents have gone up by huge sums.

“What we’ve been seeing under Covid and post-Covid is a whole new level of housing crisis in a city that is perpetually having a housing crisis,” said Andrea Shapiro, the director of advocacy and programs, who mans the tenant hotline.

At Waterside Plaza, a Midtown complex with 1,470 units, market-rate renters who signed leases during the pandemic are facing 50 percent rent hikes while those who moved in earlier are seeing their rents go up by 15 to 20 percent, according to State Assemblyman Harvey Epstein, a Democrat from Manhattan.

The real estate industry points to a persistent housing shortage exacerbated by a dearth of new construction and an influx of new renters as causes for the spiraling rents. Added to that, rising interest rates have pushed would-be homeowners out of the sales market, putting more pressure on rentals.

New York is also recovering from a two-year rental slump when landlords watched their rent rolls dwindle as thousands of New Yorkers left the city during the lockdown, driving up vacancies and pushing down rents. Despite federal and state relief programs like the Cares Act and the Emergency Rental Assistance Program, some landlords insist that they are recouping pandemic losses.

“The City’s housing crisis can be attributed primarily to decades of inadequate rental housing production and fundamentally flawed government rent control policies that have failed to improve affordability for the vast number of New Yorkers who need assistance,” said James Whelan, the president of the Real Estate Board of New York, in a statement.

But the relentless march to high rents has even rattled some landlord groups. “Look, it’s making our particular sector of the industry look bad,” said Vito Signorile, vice president of communications for the Rent Stabilization Association, an organization that represents owners of rent-stabilized apartments, who are limited by how much they can charge. Rents “are going to have to start to come down because nobody can afford these apartments at those rates.”

In June, the Rent Guidelines Board, which regulates rent on the city’s roughly one million rent-stabilized apartments, approved an increase of 3.25 percent for one-year leases, and 5 percent on two-year leases, the highest increase in almost a decade.

The New York Times corresponded with more than 100 people who said they were renters in New York and that their lives had been upended. Some tenants discovered that their apartments were rent-stabilized, and so never should have been subject to such increases. Others confronted landlords unwilling to negotiate increases that ranged from 10 percent to 100 percent, leaving them rushing to find second jobs, new roommates or new homes. Some left New York, moving in with friends or family.

Ms. Che, 42, scrambled, knowing she could never afford the $2,800 a month that her landlord was demanding. “I just moved into a kind of survival mode,” she said. “I had to think about what type of sacrifice am I willing to take on.”

It was a different feeling from her 2020 relocation to the Two Bridges apartment. Then, a friend with a car helped her move, and she furnished her new digs with an “epic trip to Goodwill in New Jersey.” They dragged her secondhand finds up the steps of the fifth-floor walk-up. “I was nesting for the first time, I’ve been searching for home for many years,” she said.

She found a rent-stabilized apartment in May with two bedrooms in the same neighborhood, paying about the same rent as her previous apartment. The building does not have the high-end finishes of her pandemic-bargain apartment. Facing the Manhattan Bridge, she sleeps in the living room, which is quieter than either of the bedrooms. But the neighbors are friendly and the super is responsive. But other tenants, like Kellie Johnson, 39, who unexpectedly had to move while eight months pregnant, have not been so lucky.

“It was a very traumatic experience,” said Ms. Johnson. She said her landlord declined to tell her exactly how much her rent would rise on an Upper West Side two-bedroom that was already costing her and her husband $4,395. She said the leasing agent estimated the increase would be at least 30 percent.

Rather than risk the unknown, she and her husband moved to a two-bedroom in Long Island City shortly before the lease expired and six weeks before their first child was born, paying around $5,000 a month.

“It breaks our heart,” she said. “We had lived in that neighborhood for eight years. We knew every single doorman. We knew people in the neighborhood. We were hoping to blend our former lives with our new lives and that was an opportunity that was not given to us.”

Many New Yorkers moved during the pandemic in search of not just better rents, but better housing. Caroline Lewis and her roommate traded in a tiny Lower East Side apartment plagued with roaches and leaking radiators for an East Village three-bedroom overlooking Tompkins Square Park in October 2020.

“Suddenly we could afford to have a place that had a dishwasher, which was nice, and my bed didn’t touch three of my bedroom walls,” Ms. Lewis, 25, who works in political communications, said of the $3,300-a-month space.

The roommates huddled in the living room, calculators out, trying to find a way to keep their household intact. They contacted the landlord, asking to negotiate. “The chances of that happening are slim to none,” Ms. Lewis said. “I may as well win the lottery.”

On Monday, the landlord came back with an offer of $5,800, still out of reach, but close enough to make the decision that much harder. “There’s no real winning in this situation,” Ms. Lewis said, noting that the offer also included an additional $1,700 security deposit. “I either pay $500 a month more and go into debt or I go home and let my best friend down.”

Either outcome means accepting a measure of defeat. “We were getting to a point in our lives where we have an apartment that we like, we have stable jobs, we can actually start to enjoy the city without feeling stressed about money all the time,” Ms. Lewis said. “It’s putting a pause on all of that.”

Tenants whose leases have not yet expired are worried, too. Jenika McCrayer, 31, a freelance writer, recently called her landlord to negotiate a two-year renewal on her Bedford-Stuyvesant one-bedroom, suggesting a modest annual increase. Instead, the landlord told her to expect her rent to rise by a third, to $2,800 a month, when the lease expires next spring.

Ms. McCrayer was appalled. The apartment flooded during Hurricane Ida, and the landlord had done little to repair it. But Ms. McCrayer and her husband have lived in the neighborhood for six years and want to stay in the community where they’ve built their lives.

“I was asking for stability,” she said of the call to the landlord. He “completely shot down the idea.”