New York Gov. Kathy Hochul said Monday she will let a COVID-19 state of emergency expire as cases continue to decline and criticism from her Republican opponents increase amid an intense election race.

Hochul, a Democrat who took office last year after then-Gov. Andrew Cuomo stepped down, has extended two executive orders each month which allows her to bypass state contracting rules and the easing licensing rules for health care workers.

The orders are set to expire at midnight. 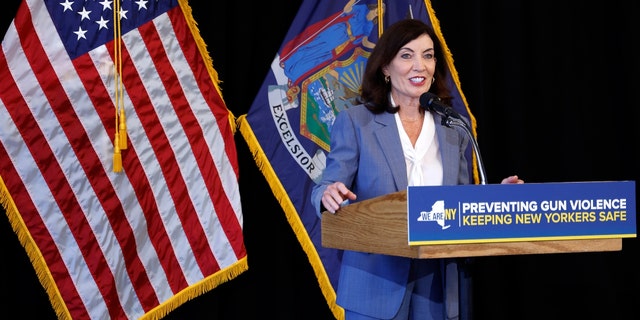 New York Gov. Kathy Hochul said Monday she would let a pair of COVID emergency orders expire at midnight after months of renewing them.  ((Photo by John Lamparski/Getty Images))

“I will not be renewing them this time,” Hochul said Monday. “We’re in a different place now. We’ve been making announcements about taking masks off on public transportation. We have a new booster shot as of a few days ago.”

The emergency allowed the state to secure COVID testing kits and to send tests to laboratories out of state, she said.

Hochul has faced criticism from Republicans, particularly her opponent U.S. Rep. Lee Zeldin for using her emergency powers. Her administration has purchased $600 million worth of at-home COVID tests, the Times Union reported.

Some people connected with the company that supplied the tests, Digital Gadgets, contributed more than $300,000 to Hochul’s campaign. She had denied the contributions played a part in the awarding of the contract.