For New York City, the COVID-19 pandemic also meant better housing policies and outcomes, with a virtual end to evictions and housing for homeless people. Glyn Robbins writes that now, by contrast, rents, evictions, and homelessness are rising, and that a new investment trust for the New York City Housing Authority may be an opening move towards privatising the city’s public housing.

As the mid-term elections loom, housing remains the rock that many American dreams are wrecked on. That’s especially true of New York City (NYC), where the cost of living is effectively the cost of housing. But as it attempts to navigate a route out of COVID-19, the “Housing Question” is as pressing an issue for global capitalism, as it was for Frederick Engels when he addressed it in 1872.

Optimism, even if misplaced, is one of the great American characteristics. In 2021, New York’s housing justice movement was buoyed with hope that, from the bad times of COVID-19, a better future was possible. Things were happening that once seemed impossible. During the worst of the pandemic, homeless people were housed in expensive hotels. Relentless campaigning made the city and state virtually eviction-free. Attention was turning to winning permanent protection from eviction without “good cause”. Nationally, the fledgling Biden administration’s “Build Back Better” agenda contained major commitments on housing, including an unprecedented $80 billion investment in public housing.

Today, things look very different. After the hotels kicked out the homeless, New York City’s new mayor, Eric Adams, launched a series of “sweeps” in an attempt to remove them from the streets. The ending of the eviction moratorium on 15 January unleashed 7,000 new cases a month, adding to a back-log of 200,000. The New York State legislature failed to pass Good Cause eviction (which would prevent landlords from ending tenancies outside of lease violations), but did pass a bill enabling a controversial Trust that some argue is a Trojan Horse for privatising NYC public housing. Others say it’s the only way to get essential investment when there’s no sign of it coming from a federal government that appears dead in the water.

The fate of housing in the United States is entwined with the housing fate of us all and New York is the epicentre of a property industry that ripples globally and portentously. NYC’s homeless population has reached levels not seen since the Great Depression and is bound to increase dramatically as the eviction courts gear-up. Already, some of the important legal safeguards won by tenants, like the right to legal representation, are being overwhelmed, Meanwhile, rents are rising at a staggering rate – up 33 per cent between January 2021 and January 2022 – storing up future evictions. The demand for Good Cause, led by the Housing Justice for All alliance, reflects the gross inequity of the housing market New York’s politicians failed to redress by passing the necessary legislation to prevent capricious evictions.

The threat of displacement will intensify as New York’s speculative real estate sector seeks to re-establish its dominance over a post-COVID urban landscape. One of its strategies for doing this will be to find new investment locations that both push forward the frontier of rentier capitalism and hedge against potential economic shocks like those of the last two years. This is perfectly illustrated in the Bronx, where the excesses of the housing market have historically been held back by a large amount of rent stabilised, co-operative and publicly owned apartments. That could be changing. The re-zoning of the Jerome Avenue corridor, in 2018, set the conditions for a new wave of private property investment in traditionally working class, ethnically diverse neighbourhoods. Permissive planning regulations allow developers to describe as “affordable” homes that are way beyond the means of most existing Bronx residents and exploit what they refer to as “a preferred asset class because of the relative stability”. 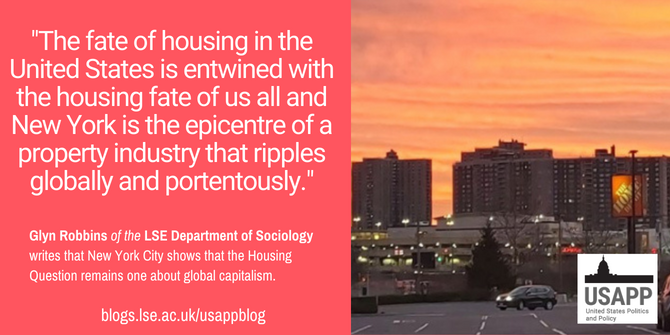 For several generations of New Yorkers, as for working class people in many other places, public housing has been a refuge from the housing storm. Some estimates suggest that, with the chaos and churn of COVID-19, a million people may now live in apartments owned by the New York City Housing Authority (NYCHA), by far the biggest landlord in the city. Despite playing a critical role in making NYC the place it is, NYCHA, like public housing authorities throughout the US, has been starved of government investment, leading to a repairs backlog sometimes valued at $40 billion. This has led a broad coalition of New York politicians, including Mayor Adams, the state Governor Kathy Hochul, and significant elements of the left, to embrace the Preservation Trust, a finance vehicle that will enable NYCHA to borrow money it would not, it is claimed, otherwise have access to. It is too early to say exactly how this will play out, although the enormous potential value of buildings and land owned by NYCHA are a juicy temptation to avaricious private developers. But the Trust concept has been heavily influenced by UK housing policy, particularly under New Labour, when various forms of privatisation were presented as benign, but which many tenants regarded as harbingers of demolition and displacement, of the type described by Professor Paul Watt in his recently published book “Estate Regeneration and its Discontents”.

However, despite local variations, the deep roots of housing malaise, on both sides of the Atlantic, should be traced to the policies of central governments which, for decades, have been held hostage by the corporate development industry, one of whose representatives eventually became US President. Among the many consequences of this unhealthy relationship has been the fallacious view that the private market can solve the housing crisis it causes. This was demonstrated again recently, when the Secretary of Housing and Urban Development, Marcia Fudge, stated “We have to use the private sector as partners to try to make sure that we can build to scale. And the only way to do that is to make it profitable for them to build affordable housing.”

I’ve worked in the housing sector since the early 1990s (partly thanks to being a student of Anne Power’s at the LSE) and I’ve lost count of the times I’ve heard versions of Secretary Fudge’s approach. It doesn’t work! I live in the London borough (Tower Hamlets) where more private sector homes – and their sometime accompaniment of “affordable” homes – have been built in the last decade than anywhere in Europe. If Secretary Fudge’s prescription had any validity, housing need in Tower Hamlets would have fallen. It hasn’t. If anything, it’s got worse.

Almost exactly 150 years ago, Engels wrote: “The so-called housing shortage…is not something peculiar to the present (but) gets talked of so much because it does not limit itself to the working class but has affected the petty bourgeoisie also.” Allowing for shifting definitions of social class, this is a prescient observation. A key feature of today’s housing crisis, encapsulated by the situation in New York, is how it has enveloped almost every aspect of city life. For Engels, the answer to the Housing Question was the overthrow of capitalism. Ultimately, I probably agree with him. But given the huge political and economic flux and uncertainty of our times, governments everywhere have the tools at their disposal to chart a better housing future in which, in the words of former UN Special Rapporteur, Leilani Farha, home is no longer “a matter of life or death”.

Note: This review gives the views of the author, and not the position of USAPP– American Politics and Policy, nor of the London School of Economics.

Glyn Robbins – LSE Department of Sociology
Glyn Robbins was born in London and has worked in housing since 1991, when he was a student of Professor Anne Power on the LSE’s housing Masters course. In 2013 he completed a Ph.D in planning and urban policy. Since 2017, he has helped support students on the LSE’s Cities Programme and became an LSE Visiting Fellow in 2019 and a Fulbright Scholar in 2020/21. He also manages a north London council estate. Glyn’s writing about housing and urban policy has been widely published and he has frequently been interviewed by the media on the subject. In addition to his professional and academic involvement, Glyn is a long-time housing campaigner.