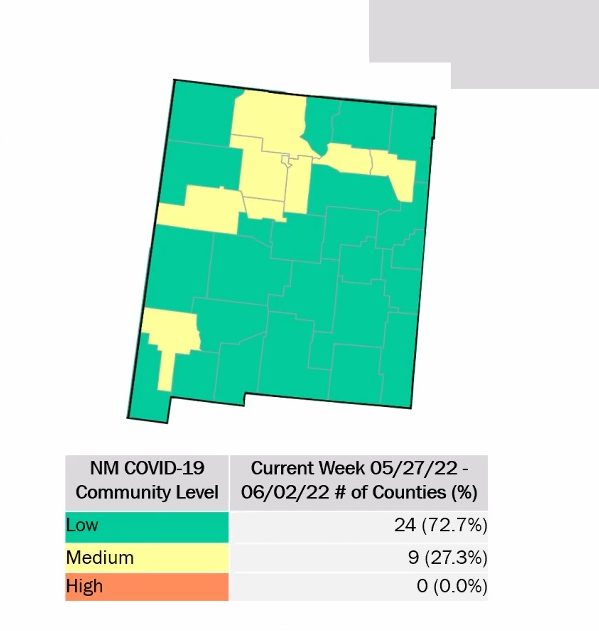 NEW MEXICO (KRQE) – For the first time in nearly three months, state health leaders are expected to address the current state of the COVID-19 pandemic in New Mexico during a news conference this afternoon. KRQE News 13 will livestream the briefing here on this page, with coverage expected to start around 1 p.m.

The state’s Department of Health (NMDOH) ended its weekly COVID-19 briefings in early March, amid a continued downtrend of cases tied to the omicron variant. Since then, state data indicates that trend continued until roughly mid-April, when the total number of known new cases began trending up.

In March, NMDOH Acting Secretary Dr. David Scrase acknowledged the state’s positive case data is expected to change due to a shift toward at-home antigen testing. While the state has set-up a website to self-report positive tests, it’s unclear how many people are actually using it.

While cases have risen, hospitalizations remain low, a key metric the state discussed in March 2022. In a March news conference, Dr. Scrase said: “At this point, what we’ve learned is the cases themselves are no where near as important as hospitalizations. That is what the stance the CDC has taken in its recommendations as well.”

On Tuesday, June 7, New Mexico reported 132 people hospitalized with COVID-19, 15 of whom were on ventilators. Over the last week, from May 31 through June 6, a state report indicates New Mexico saw 102 new hospitalizations related to COVID.

Since the state of the pandemic, New Mexico has reported 7,849 deaths attributed to COVID-19, and 541,646 confirmed cases.