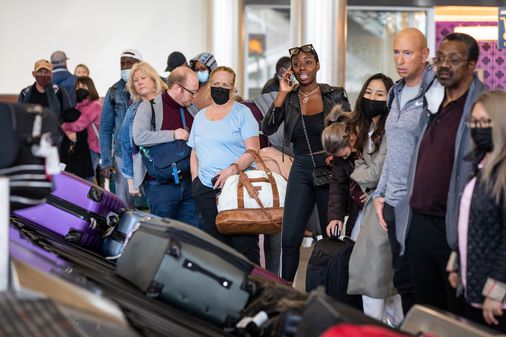 Despite the stories and viral videos of passengers punching, screaming, and harassing flight attendants and each other over mask-wearing mandates on planes, a series of surveys have found that most passengers are still in favor of masking on flights and will continue to wear them.

Last month, a federal judge in Florida voided the national mask mandate covering airplanes, ruling that the Centers for Disease Control and Prevention had overstepped its authority in requiring masks on public transportation. Shortly after the April 18 ruling, the Justice Department filed an appeal to overturn Judge Kathryn Kimball Mizelle’s order. Since the ruling and subsequent appeal, the CDC has recommended that passengers continue wearing masks on flights as COVID-19 cases rise again.

“Using public transportation and being in transportation hubs can involve spending long periods of time in areas that may be crowded or poorly ventilated, increasing chance for exposure to COVID-19,” the agency wrote on its website.

Airlines can set their own rules, and airlines in the United States quickly made mask-wearing optional.

The Justice Department appeal is currently sitting in Florida’s Eleventh Circuit Court of Appeals. Records show the last activity was on May 9, when the government submitted a form listing the entities and individuals who have an interest in the outcome of the case. It’s a formality required in such cases.

But despite Mizelle’s April 18 ruling, a majority of passengers queried in several surveys this month support mask-wearing.

In an in-depth Pew Research Center survey, 57 percent of respondents said travelers on airplanes and public transportation should be required to wear masks. Broken down further, the Pew survey revealed that those in favor of wearing masks were primarily Democrats, while those opposed were predominantly Republican. Pew surveyed more than 10,000 Americans, and a whopping 80 percent of Democrats said masks should be required for travel, while 71 percent of Republicans said they should not. It also found that travelers who have been vaccinated favor wearing masks more than those who have not been vaccinated.

A poll by the Associated Press-NORC Center for Public Affairs Research reported that 56 percent of Americans favor requiring the public to wear masks on planes, trains, buses, and other means of public transportation compared with 24 percent who oppose it, and 20 percent who don’t have an opinion about the requirement. Americans are also more likely to favor requiring people at crowded public events to wear face masks. Like the Pew Research Center survey, the AP-NORC study found a sharp divide between Republicans and Democrats on mask-wearing.

No matter the opinion on masks, or the political party, the great unifier is the urge to travel this summer. Even with airline ticket prices increasing, staffing shortages, and numerous delays and cancellations, travelers are returning to the skies. In another batch of surveys (yes, there are always more surveys) a Harris Poll determined that 77 percent of Americans plan to travel this summer. In 2020, only 29 percent planned a leisure trip.

“The moment has finally arrived when most of us can scratch the travel itch that’s been building in us for over a year,” said Roger Dow, president and CEO of the US Travel Association. “Polling confirms that Americans are fired up to get back out on the road.”