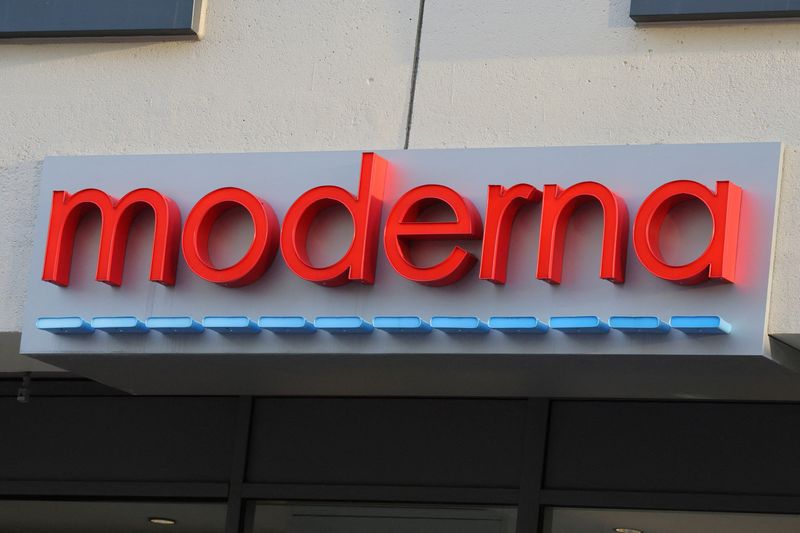 By Patrick Wingrove and Leroy Leo

(Reuters) -Moderna Inc said on Tuesday that its experimental messenger RNA vaccine for respiratory syncytial virus (RSV) was 83.7% effective in a late-stage trial at preventing at least two symptoms, such as cough and fever, in adults aged 60 and older.

RSV, which produces symptoms similar to a cold but can be fatal for young children and older adults, causes about 14,000 deaths annually in adults aged 65 and older. The disease surged in the United States and Europe this fall alongside the flu and COVID-19.

There is currently no vaccine for the virus in adults. Moderna, Pfizer Inc and GSK Plc are racing to get their RSV vaccines to market first.

On the other hand, Sanofi and partner AstraZeneca Plc’s antibody treatment nirsevimab has gained the European Commission’s marketing authorization for the prevention of RSV in newborns and infants. It is currently under review by the U.S. Food and Drug Administration.

Moderna said it intends to submit its vaccine, mRNA-1345, for regulatory approval consideration globally in the first half of 2023.

The company’s president, Stephen Hoge, told Reuters that its vaccine appears to compare favorably to the experimental Pfizer and GSK shots.

“It’s very exciting to see progress in RSV vaccines in older adults, and I think both of those vaccines have shown pretty remarkable results as well,” Hoge said. “We really think we’re in that top class – 84% is a terrific efficacy number.”

The RSV vaccine market could be worth more than $10 billion globally, half of which would come from the United States, according to Cowen analyst Tyler Van Buren.

Moderna’s study was conducted in about 37,000 participants aged 60 years and older. The data analysis was performed after 64 participants contracted RSV. The company plans to release the full data at a medical meeting.

Hoge said Moderna had started secondary analyses on the vaccine’s efficacy against more severe disease and hospitalization. He said it was too early to provide a potential price range for the vaccine it expects to be given annually.

The vaccine was generally found to be safe, with the most common side effects including injection-site pain, fatigue and headache. Hoge said there were no concerns of myocarditis, a type of heart inflammation linked to mRNA COVID vaccines.

(Reporting by Patrick Wingrove in New York and Leroy Leo and Mariam E Sunny in Bengaluru; Additional reporting by Julie Steenhuysen in Chicago; Editing by Caroline Humer and Bill Berkrot)