The Perfect Enemy | Mass. COVID-19 cases and hospitalizations are rising, but experts think we may be nearing the peak - The Boston Globe
Skip to content
May 27, 2022
Read Time:4 Minute 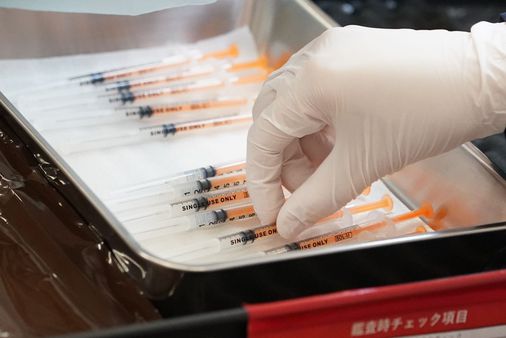 In a troubling trend for a state trying to get back to normal, Massachusetts COVID-19 cases and hospitalizations have been gradually rising for weeks. But experts say the spring wave could soon begin to subside without reaching levels similar to last winter’s deadly Omicron surge.

“It’s too early for me to be confident we are peaking but I do think we are getting close,” said Matthew Fox, a professor of epidemiology and global health at the Boston University School of Public Health.

“I don’t think this will be a very strong or prolonged wave because we have so much built-up immunity from immunization and prior infection,” Fox said in an e-mail.

Dr. Scott Gottlieb, former commissioner of the US Food and Drug Administration and a Pfizer Inc. board member, said Wednesday on CNBC-TV, “There’s clearly a wave of infection going through the Northeast right now” but “it seems to be peaking right now.”

Based on the rising case and hospitalization numbers, the US Centers for Disease Control and Prevention has designated seven Massachusetts counties, including Suffolk County, home of the state’s largest city, Boston, and Middlesex County, the most populous county, as having high levels of the virus. The CDC recommends that in those counties people wear masks in indoor public spaces. The Boston Public Health Commission has made the same recommendation. Some schools have recommended or required masks as cases statewide among students and staff have risen.

Experts have warned that the virus has thrown curveballs in the past and raised concerns about the impact of the arrival of the Omicron subvariants BA.2 and BA.2.12.1. And with tests of Eastern Massachusetts waste water data sending warning signals that more case increases may still be ahead, Fox said, “I do think we should prepare and in some circumstances we may need to temporarily reinstate masking to protect the vulnerable.”

But experts also think this wave won’t continue forever. The closely-watched University of Washington Institute for Health Metrics and Evaluation model predicts that COVID-19 cases in Massachusetts will peak in about two weeks, and hospitalizations will peak about two weeks after that.

Justin Lessler, a professor of epidemiology at the Gillings School of Global Public Health at the University of North Carolina Chapel Hill, said, “My intuition is things shouldn’t go up too much further” in Massachusetts. “I certainly think it’s reasonable to believe the wave is probably going to be cresting soon.”

He said the current rise in cases is likely driven by a combination of factors, including the subvariants’ increased transmissibility and ability to escape immunity, and the public letting their guard down, dropping precautions such as masking.

What will slow the virus down? It could run out of unprotected targets. Lessler said that the “Omicron wave was big … and the effect of that preexisting immunity is going to start asserting itself at some point,” along with the state’s high vaccination rates.

Another factor working in our favor, he said, could be the seasonality of the virus. “There’s some evidence that the virus may transmit less efficiently in warmer conditions, but also people move more of their interactions outside in warmer weather, and schools let out, so you don’t have that amplifier. The combination of those effects will help dampen the wave.”

Lessler is one of the coordinators of the COVID Scenario Modeling Hub, which brings together modeling teams and asks them to look into the future under different scenarios.

“The general trend” among the models, he said, “is that this wave would be smaller than the Omicron wave and, in most places, smaller than the Delta wave,” but he also emphasized “there’s a lot of uncertainty in the projections.”

Lessler said people should continue taking precautions such as getting vaccinated and boosted; masking, particularly if you are older or high-risk; and avoiding large indoor gatherings.

“The virus is out there. It remains a threat. All the things that worked to control the virus still work, and people should be considering them when thinking about the safety of themselves or their loved ones,” he said.

While the state and the country still have to get through this spring wave, the experts also said there could be more trouble ahead in a few months.

“We’re anticipating that we probably would see at least a moderate, if not significant, resurgence in cases” in the fall and winter, driven by seasonality and the waning of the immunity offered by shots and previous infections, Lessler said.

The Biden administration has warned of the possibility of 100 million cases in the fall, but Lessler said that was “on the high end” of what he’d expect, unless a new variant emerges.

Fox said more waves are coming, but unless a new variant takes over, he expects them not to hit so hard.

“It is somewhat likely we will get a surge in January as there just seems to be a periodicity with this virus here in New England. It likely relates to the holidays and to the climate. We also tend to get one in the fall as kids come back to school. But … over time, more and more people are getting infected, building up immunity. So the longer this goes on, barring any new variant, later waves are just less impactful. So I expect more waves, but I expect them to be much more muted,” he said.

Martin Finucane can be reached at martin.finucane@globe.com.