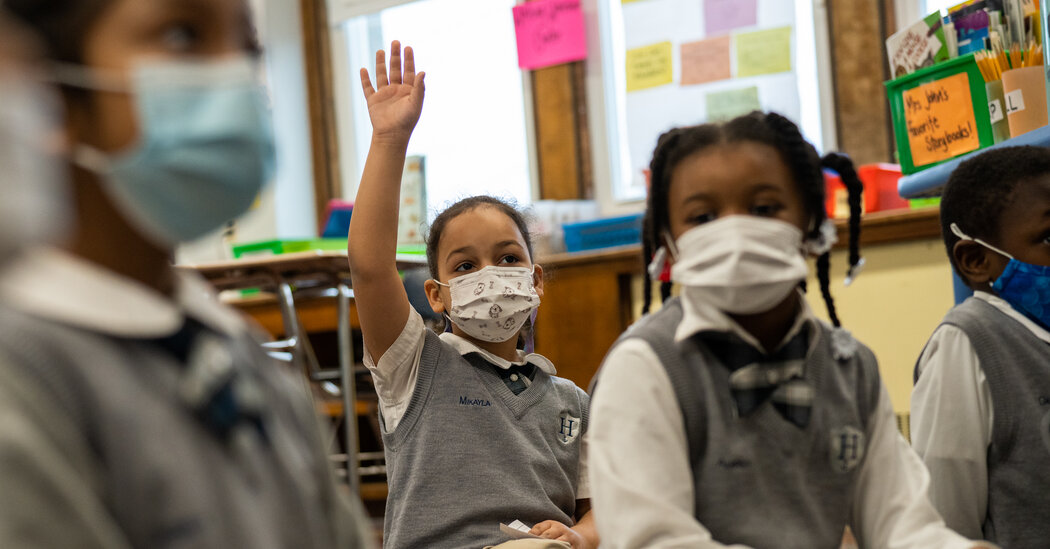 In a so-called natural experiment, two school districts in Boston maintained masking after mandates had been lifted in others, enabling a unique comparison.

Masks have been a cultural flash point since the start of the pandemic, and mask mandates in schools have been especially incendiary. Critics have argued that there is no strong evidence to prove that masks slow the spread of Covid, and that in any case children weren’t wearing the right kinds of masks or weren’t wearing them properly.

Now a research paper details a so-called natural experiment that occurred when all but two school districts in the greater Boston area lifted mask requirements in the spring. Researchers took that opportunity to make a direct comparison of the spread of Covid in masking and non-masking schools.

The bottom line: Masking mandates were linked with significantly reduced numbers of Covid cases in schools.

Infection rates were lower among masked students — even in Boston’s public schools, where many buildings are old and lack good ventilation systems, classrooms are crowded and students are more often from at-risk communities — than among unmasked students attending newer schools in communities like Cambridge and Newton.

The data should help dispel misinformation about the effectiveness of universal masking requirements in stemming viral transmission in schools, said Julia Raifman, an assistant professor at the Boston University School of Public Health and an author of an editorial accompanying the new study.

The study did not specify the types of masks worn by the children, suggesting that any type was at least somewhat protective, she added.

“This study shows that if people are wearing masks as a group, that it reduces transmission for everyone in the population, and it reduces school absences and teacher absences,” Dr. Raifman said.

Even after the Centers for Disease Control and Prevention lifted mask requirements for schools last year, many states kept the mandates. Massachusetts, along with 18 other states and Washington, D.C., kept masking in place in public schools at the start of the 2021-22 school year but rescinded the policy in February.

More on U.S. Schools and Education

Until then, trends in Covid incidence were similar across school districts in the greater Boston area. After lifting the mask mandate, the state required districts to continue reporting all Covid cases among students and staff members and provided funding and support services for testing.

The researchers involved in the study used that data to track Covid cases week by week in 72 school districts, comparing the two that had retained masking for 15 weeks — Boston and Chelsea — with 70 others that had lifted mask requirements at different times.

Removing of mask mandates was associated with an additional 44.9 Covid cases per 1,000 students and staff members, corresponding to an estimated 11,901 cases during the 15-week period, the scientists concluded.

In 12 weeks of the 15-week period, “we saw increased incidence that was statistically significant,” she added.

Cheryl Buckman said her 9-year-old son, a third-grader in a Boston public school, had developed symptoms of Covid within days after the school lifted masking requirements late last year.

Both Ms. Buckman and her son have asthma and a blood disorder that makes it difficult to fight off infections, and she became ill just as he was recovering. Both ran high fevers for several days, she said, and he missed more than a week of school. She had to postpone needed surgery because of her illness.

“Honestly, it’s careless to remove a mandate too soon,” Ms. Buckman said in an interview. “The whole district stopped masking, except on the buses, and when he wore a mask he got made fun of, so he was afraid to wear it.”

Ms. Buckman’s son has autism, she added, and he was terrified of Covid. “He knew so many people had died from it,” she said.

Opponents of masking in schools have criticized the data on its effectiveness, but they have also raised other concerns.

Masking may cause communication problems and delays in speech development, may be particularly onerous for children with learning disabilities and makes it difficult to read or communicate emotional expressions, critics have said.

And many adults, as well as children, just find masks very uncomfortable, especially when worn for a whole school day.

Dr. Tracy Beth Hoeg, an epidemiologist and fierce critic of school masking, noted that the new study was observational and not a randomized, controlled clinical trial. As such, she said, it can point to a correlation but cannot prove a causal relationship between mandatory masking and a lower incidence of Covid.

Schools did not abandon mask policies because they were ineffective at curbing viral transmission, Dr. Doron said, but because they could lead to other complications.

She added, “Even teachers who chose to continue wearing a mask prefer there not be a mandate, so they don’t have to deal with discipline all day.”

But a Boston parents’ group, BPS Families for Covid Safety, has already called for reinstating of universal masking in schools, saying that the new study provides evidence that the practice protects against both illness and lost days of learning in a district where vaccination rates are relatively low and families come from communities that have suffered disproportionately during the pandemic.

At the very least, universal masking should be implemented if an outbreak occurs at the school or in the larger community, and after students return from vacations, which often involve traveling and family gatherings, said Sarah Horsley, a co-founder of the group and a parent of a fourth-grader.

“We got an email a few weeks ago from school officials saying they were strongly encouraging masks because of wastewater testing showing high amounts of virus,” Ms. Horsley said. “But the majority of students still aren’t wearing them.”